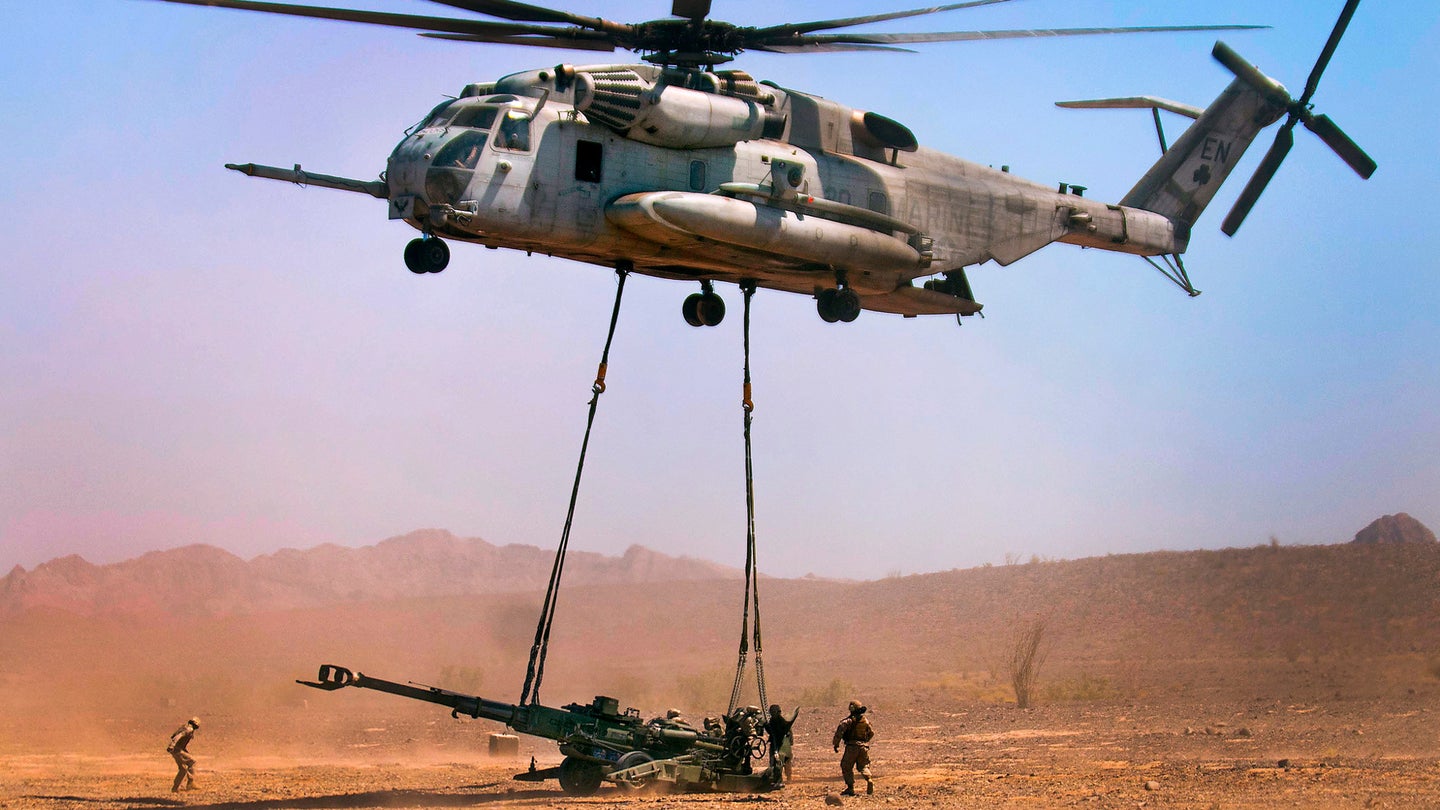 In March 2016, the Pentagon confirmed that U.S. Marines had quietly set up an artillery base south of Mosul, Iraq after one of the individuals at the site died in an Islamic State attack. Now, the leathernecks appear to have secretly moved into northern Syria on a similar mission.

Marines and 155mm M777 howitzers from the 11th Marine Expeditionary Group have moved into the country to support Washington-backed rebels who are gearing up to eject the brutal terrorists from their de facto capital Raqqa, according to a report by The Washington Post’s Thomas Gibbons-Neff and Dan Lamothe. The revelation comes just days after pictures appeared on social media of American special operations forces moving very publiclyinto the contested Syrian city of Manbij.

"For the base in Syria to be useful, it must be within about 20 miles of the operations U.S.-backed forces are carrying out," Gibbons-Neff and Lamothe explained. "That is the estimated maximum range on many rounds fired from the M777 howitzer."

They added that rocket-boosted, GPS-guided Excalibur shells have a range of nearly 30 miles. For operations within a densely populated area like Raqqa and its suburbs, these precision-guided projectiles would be critical as American troops would undoubtedly try to avoid causing collateral damage and killing innocent civilians.

The Marines' latest deployment would also be the first time the Pentagon has sent regular troops into Syria proper, marking a significant escalation there in the American campaign against Islamic State. Previously, American forces in the country had generally been limited to special operators working with local fighters. An unnamed Pentagon official told Military.com that the Marines had been on the ground "weeks ago" and had multiple batteries of howitzers in place.

U.S. Army High Mobility Rocket Artillery Systems (HIMARS) batteries had blasted targets inside the country, but from sites in neighboring Turkey and Jordan. These increasingly popular weapons consist of a six-round 227 mm rocket launcher on the back of an otherwise-standard 6x6 truck. The GPS-guided M31 rocket has a 200-pound warhead and can hit targets more than 40 miles away.

The local artillery support will likely be essential if Syrian forces expect to retake Raqqa any time soon. If the Iraqi-and Kurdish-led offensive to liberate the city of Mosul, which began in October 2016, is any indication, the rebel troops could be looking at a months-long fight. Even with daily coalition air strikes and artillery fire, Islamic State continues to hold out in the eastern portion of the Iraqi city thanks to tunnels, human shields, and other reinforced positions.

The reported Syrian deployment follows a larger trend of American howitzers and rocket artillery backing up local ground offensives against Islamic State. As already noted, Marine artillerymen previously brought their M777s to Iraq in order to help secure the routes to and the area around Mosul in the lead up to the push into the city itself.

Though the Marines ultimately left the site near Mosul, which they initially named Fire Base Bell, U.S. Army troops arrived with their own M777s to continue the mission. To play down the active combat mission, the Pentagon had quickly renamed the base the Kara Soar Counter Fire Complex.

In September 2016, additional soldiers brought M109A6 Paladin self-propelled howitzers into Iraq. Also able to fire the precision Excalibur shells, these mobile weapons were still pounding Islamic State more than six months later. And for nearly a year, Army HIMARS units had been lobbing hundreds rockets at terrorist positions. These weapons were particularly effective in built-up areas, since they would fall straight down on their targets cause damage within a relatively small blast radius.

However, the biggest advantage of these ground-based systems is their ability to operate in bad weather or other conditions that would prevent fighter jets, attack aircraft, and gunship helicopters from flying strikes. Positioned within range of the front lines, howitzers and rockets can often respond faster to rapidly changing situations.

By the end of 2016, American artillery fire was apparently so prevalent and routine in Iraq that U.S. Central Command didn't even bother to announce the total number of fire missions. "Ground-based artillery fired in counter-fire or in fire support to maneuver roles are not classified as a strike," the Pentagon’s top headquarters for operations in the Middle East says in daily press releases.

Unfortunately, sending in the Marines puts more American troops in the middle of an increasingly complicated conflict with uncertain objectives. Since the country descended into a brutal civil war in 2011, rebels, terrorists, foreign forces, and troops loyal to the regime of President Bashar al-Assad in Damascus have all battled each other.

Officially, since 2014, the Pentagon’s mission in both Iraq and Syria has been to defeat Islamic State—not to overthrow Assad. During his campaign and after his election victory in November 2016, Pres. Donald Trump vowed to expand the this American military mission specifically, and suggested he was willing to work with Syria’s government and Russian Pres. Vladimir Putin to achieve its goals. However, some of the groups who have aligned themselves with the United States are ultimately seeking regime change, or in the case of many ethnic Kurdish forces, potential independence.

The confusing agendas and close proximity of armed groups have already led to serious and potentially deliberate incidents. In June 2016, Russian aircraft struck American-backed Syrian troops at an outpost in At Tanf. Then, in September 2016, the Pentagon acknowledged American warplanes mistakenly bombed Syrian government troops. Russia conducted another strike that killed Turkish soldiers in February 2017.

But adding more American troops to the mix might be a part of a larger plan. When U.S. special operators arrived in Manbij last weekend in Stryker armored fighting vehicles, their very open presence appeared to be a complicated effort to keep various American partners from fighting each other, as well as shielding them from regime-aligned forces and Russian air strikes, while keeping the focus on Islamic State. The Marines could do the same for Syrian forces while supporting a concerted offensive into Raqqa.

Whatever the reality is, putting Marines on the ground will definitely be a similar boon to American-supported groups as they battle their way into the terrorist hub. We'll just have to wait and see whether they'll be able to escape getting dragged into the larger conflict in the country.