Was A New Type Of Drone-Launched Weapon Used To Kill Al Qaeda's #2 Man? 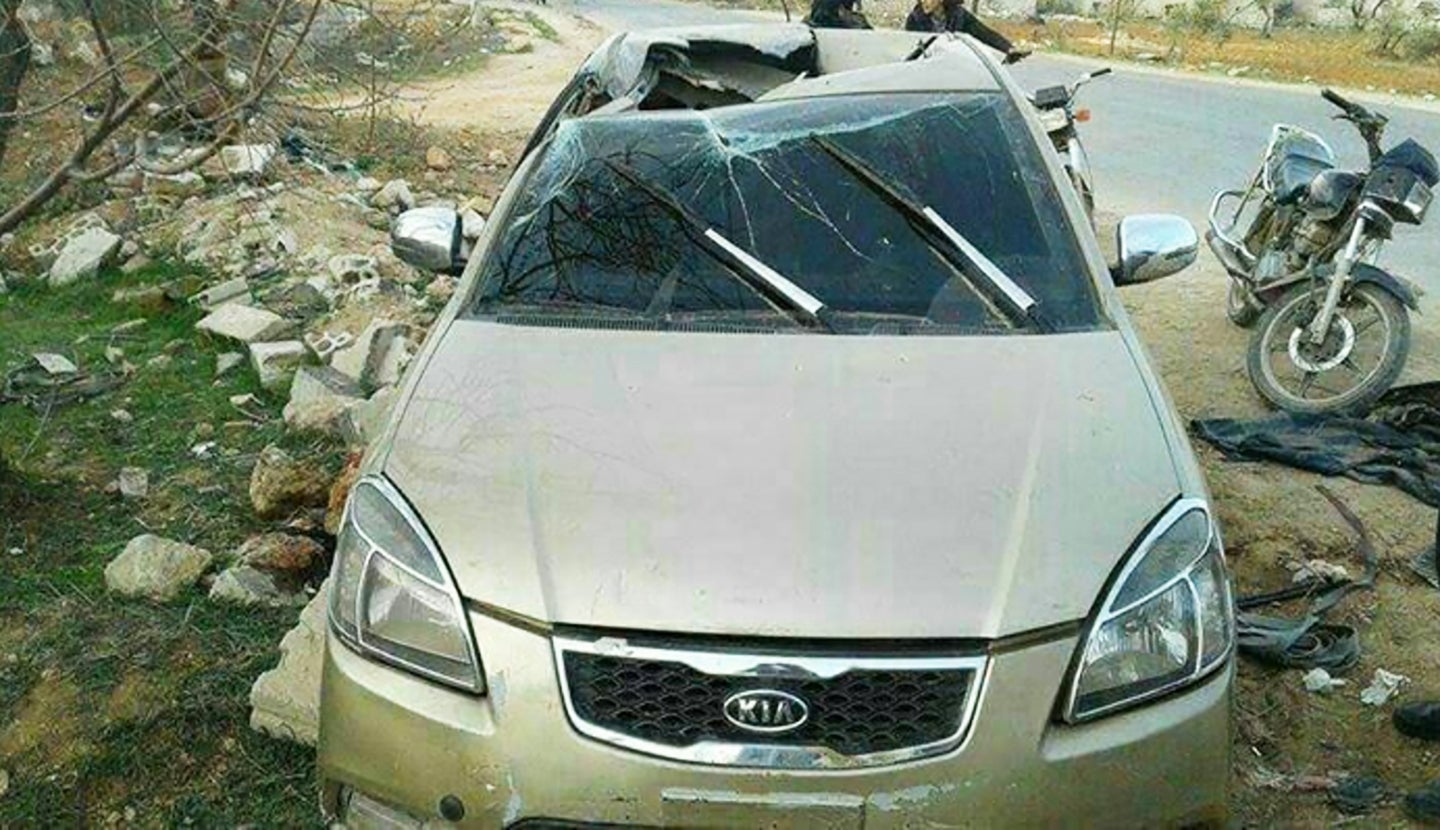 Al Qaeda's number two man, the deputy of Ayman al Zawahiri himself, Abu Khayr al Masri, was supposedly killed as the result of a drone strike while traveling in a Kia sedan near al-Mastouma, a town in Syria's Idlib province. What he was doing there remains unknown, though he is thought to have been active in Syria since his release from Iranian custody in 2015. There has not been a confirmation from the US that he was indeed killed, but pictures of the vehicle following the attack make one thing clear: this is a very different aftermath than what you'd see in a traditional drone strike.

Instead of a burned out and shattered hulk of a vehicle obliterated by the AGM-114 missile, or a smudge surrounded by burnt rubble that results from a GBU-12 500lb laser-guided bomb strike, the car pictured literally has a hole punched through its roof with no real sign of a large explosion. It's almost as if an anvil was dropped on the car's occupants. So what's going on here? It's not clear, but there are a few possible answers.

In over a decade and a half since the RQ-1 Predator became the MQ-1 Predator, adding the ability to kill to its repertoire, advancements in unmanned aircraft armament have followed at a less than spectacular rate. After the better part of a decade of relying on existing weaponry ported over from manned aircraft, guided micro-munitions that weigh less than 25 pounds—far smaller than the already pint-sized Viper Strike and Griffin air-to-ground weapons—began development. Packing an explosive charge as small as a 40mm grenade, these weapons allow for as little collateral damage as possible while still supplying the precision of their much heavier cousins. Guidance is usually provided by laser designation, or, in some configurations, via GPS coordinates. This new round of pint-sized drone weaponry would allow for smaller unmanned aircraft to kinetically effect the battlefield like never before.

These little guided bombs—such as Raytheon's Pyros and Lockheed's Shadow Hawk, or the even tinier 8-lb Hatchet by ATK—enable diminutive, remotely piloted vehicles like the RQ-7 Shadow to become armed hunter-killers. Even the CIA and USAF's RQ-170 stealth drone, or an evolutionary adaption of it, could carry such a weapon, or weapons, in a small weapons bay behind its electro-optical turret.

Although the initial development of these weapons had been quite public, their deployment status has not. Obviously a drone force like the one operated by the Central Intelligence Agency could leverage this technology clandestinely, and in doing so it may help them get around much of the controversy and political instability surrounding the targeted assassination drone program that President Obama famously accelerated during his term in office. Using these tiny weapons would likely result in far fewer innocent deaths and damage to surrounding property than their heavier and somewhat mis-matched counterparts.

Also, having such weapons in a drone's quiver means strikes can be made in places where they couldn't in the past based on a static set of rules of engagement. Aside from a high-power laser against soft targets, these little smart bombs offer the most precise and surgical aerial precision strike capability on the drawing board today. Not just that, but they also allow for smaller unmanned aircraft with less cumbersome logistical footprints to be used offensively in areas where potential targets are known to be operating. It is possible that much of these weapons' operational testing has gone on quietly at a very secure unmanned aircraft test base in the Nellis Range Complex not far from Area 51, and now they are finally showing up operationally in the field.

I know what you are thinking: "It has taken this long to put little guided bombs on small drones?" Yes, it has, even though it is just about the most logical and low-hanging tactical fruit imaginable. Just chalk it up to another frustrating Pentagon mystery.

Other countries have also pursued these pint-sized guided weapons, including Israel, which has used them against Hamas in recent years. Even China's Predator-sized Wing Loong unmanned aircraft features a selection of munitions that include relatively small guided bombs, although they still seem larger than the variety we are talking about here today. Still, these Chinese-built drones are increasingly active in the region, with Saudi Arabia, UAE and Egypt having acquired their own fleets of the type. The fact is, even if a guided micro-munition was used in the attack, we don't know what type of platform it came from or even who was at its controls.

On an even smaller scale, groups like Hezbollah and ISIS have both pursued the weaponization of hobby-like drones. You can read all about this here. It is possible that ISIS or Hezbollah, both of which oppose each other, and al Qaeda in Syria, could have used a small improvised unguided bomblet to attack al Masri's car. Although doing so would have required a big dose of luck, especially if the vehicle was moving at the time of the attack as these weapons are mainly used against static targets as because just fall to ground via gravity and some stabilizing tail finds or even a badminton shuttlecock's tail. Still, it is possible that such a munition could have found its mark and tore open the al Masri's Kia like a can opener, killing its occupants inside without the presence of significant shrapnel, overpressure or fire.

Another possibility is that a "suicidal drone" could have targeted al Masri's vehicle. Read all about these here. These kamikaze drones of sorts, some of which are optionally disposable, are proliferating throughout the world. For instance, Aeroviroment's Switchblade used by the US, or even an Israeli unit, like the long-range Harop or the much smaller Hero-30, could have been used in the assault. The only problem is that the area where the attack took place remains highly disputed, and the US has no special operations forces anywhere near the area. An Israeli Harop could make it there from Israeli territory, although hitting a time sensitive target, possibly a moving one, over such range with a slow aircraft would require incredible luck and timing. Not just that, but they would need the intelligence to know who and what to target in real time once the drone arrived in the area. Russia, which has a hodgepodge of somewhat rudimentary unmanned aircraft working over Syria, including variants of the Israeli Searcher UAV, but is not known to have armed any of these drones. Although it is possible that this has changed in recent months, it is unlikely, and there has been no talk that they may be turning these into "suicidal drones."

If indeed a US drone executed the strike on al Masri, or at least on the amazingly intact car shown in the picture, maybe an inert 500lb GBU-12 laser-guided bomb could have been used against the target, but this would have required the bomb to strike the target dead-on. These "concrete" smart bombs have been used in the past to pretty much eliminate the possibility of collateral damage when prosecuting targets in urban areas. Maybe most famously, the Royal Air Force used them during Operation Telic to take out Iraqi combat vehicles hiding next to homes, schools and mosques in al Basra, Iraq. Later on, the French used them against targets in Libya.

The concept is simple—a Mk82 high-explosive bomb is swapped out for an inert, concrete-filled training version of the Mk82 and the same GBU-12 guidance kit is attached to it that is normally attached to its live counterpart. The speed and high angle of the weapon at impact can inflict considerable damage without any explosion. Against soft targets, this configuration is extremely deadly but once again, it must hit dead-on to be effective. As such, if the target is moving its chances for success drastically decreases. It is an interesting tactic but in this case, considering the target was supposedly al Qaeda's number two man who was already rolling around in a war zone, using such a weapon seems to inject needless risk into a very high-priority strike. Also, no components of such a weapon were shown in the pictures.

In the end we can't say for sure what exactly caused the highly localized and seemingly bizarre damage to the Kia in question, but whatever did so didn't even blow out the car's windshield. There could also be some other strange explanation for what happened that had nothing to do with a drone attack as being widely reported. But going on the limited information we have, we can pretty much ascertain that if this strike indeed came from a drone, that drone did not use an AGM-114 Hellfire missile or GBU-12 Paveway laser-guided bomb to execute its target below. With this in mind, this strike could be one of our first glimpses into the next technological phase of the drone war on terror.