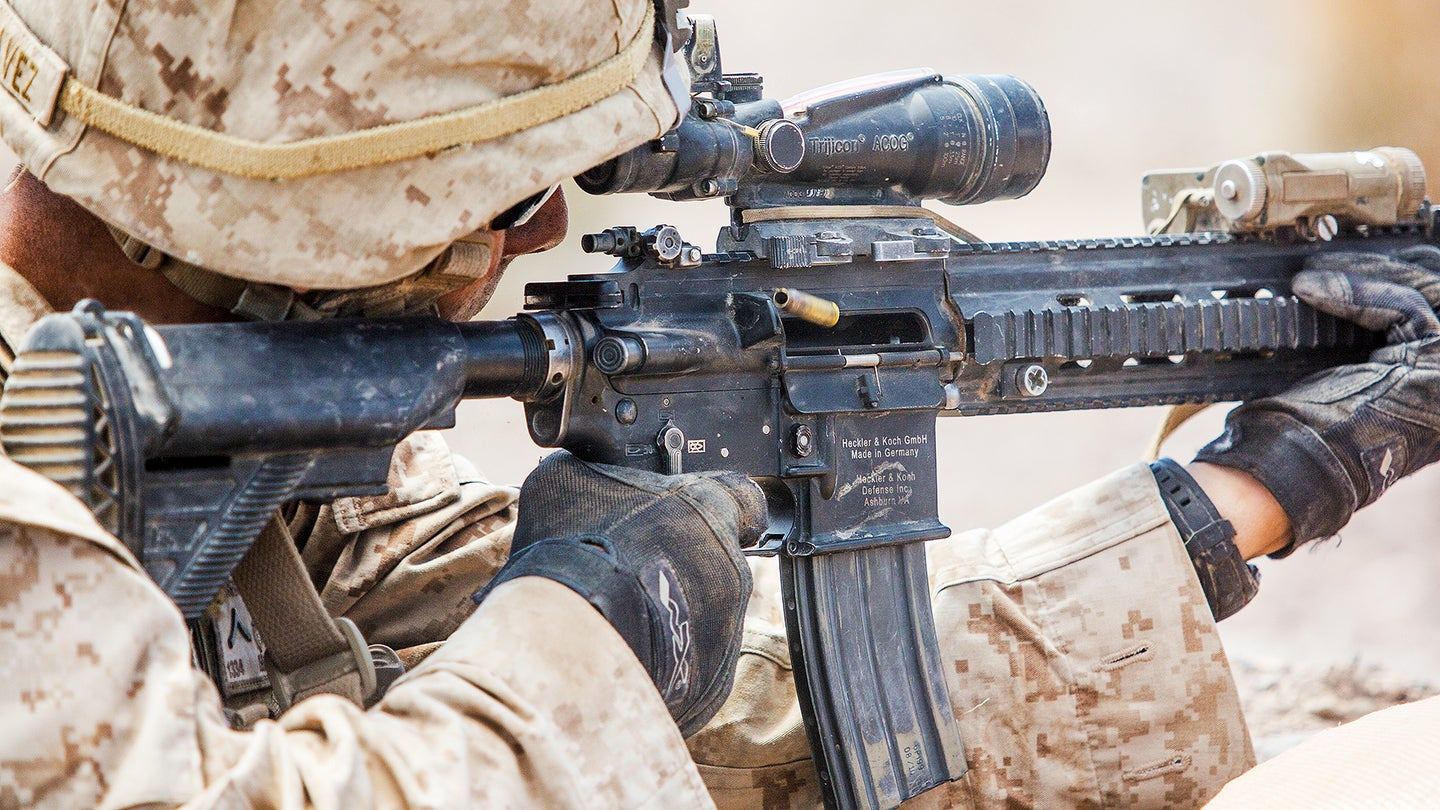 Operationally, its career in the US Military started out among the highest rungs of the special operations community, and was made famous by SEAL Team Six as the assault rifle that was used on the raid that killed terror mastermind Osama Bin Laden. Now, a half-decade later, the Army and the Marine Corps have selected versions of the rifle, but for wildly different uses. The Marines in particular have anted up with orders for thousands of units, and these weapons also represent an evolutionary change in tactics for the UMSC, one spurred by hard lessons learned over the past 15 years of perpetual warfare in the Middle East.

German small arms manufacturer Heckler & Koch is world renowned for making some of the finest, most durable firearms on the planet, and they aren’t afraid to go their own way when it comes to design. From being the first adopter of polymer for combat firearms to their super-accurate “lemon squeezer” P7 series of handguns to firearms designed to be used by combat divers underwater—as well as legendary and widely used weapons like the MP5 submachine, PSG sniper rifle, USP handgun, to the G3 battle rifle. The company's achievements go on and on. But outside the special operations community, where budgets aren’t so generous or flexible and procurement is a precarious bureaucratic maze, H&K has struggled to achieve big orders from the Pentagon. Price has a lot to do with it. The company’s firearms aren’t cheap to say the least, even when manufactured in large quantities. But this situation has slowly started to change with the advent of the HK416 assault rifle.

For a company that likes to go their own way design-wise, building yet another AR-15 derivative seems too pedestrian. But after being spurred by the Army's tier one counter-terrorism force, better known as the 1st Special Forces Operational Detachment-Delta or just "Delta Force," it wound up being a wildly good business decision. Built with the special operator in mind, the HK416 adopts the usual AR-15 format but gets rid of the direct impingement style gas system that Eugene Stoner came up with well over a half century ago. Instead, a gas piston and pushrod is used to cycle the weapon when it’s fired, similar to the famously indestructible AK-47 and similar to H&K’s G36 assault rifle.

Gas-piston AR-15s have been around for some time, and they have become increasingly popular, offering the same ergonomics and modularity of the AR-15, but with a cleaner and more reliable action. H&K also packaged their gas piston AR-15 derivative with a series of smaller additions, include a proprietary grip, butt-stock, recoil buffer system, iron sights, accessory quad rail and even a heavy-duty steel box magazine. But most importantly, the design included a medium contour match-grade barrel, with different lengths available, that had no chrome plating inside its bore to affect accuracy. All this added up to an incredibly usable, durable, adaptable and reliable design that felt familiar in operators’ hands. Most of all, it was incredibly accurate. The HK416 rifle was chambered in 5.56 NATO just like its AR-15 based cousins (M-16, M4 etc), and a 7.62 NATO/.308 Winchester variant was also developed similar to the AR10/LR308. This rifle was dubbed the HK417.

Although the first units were delivered to Special Operations Command for “testing” around the middle of decade, with Delta Force trying the weapon out originally, the HK416s were still pretty rare within SOCOM on May 2nd, 2011, when SEAL Team Six took down Bin Laden. The gun that did the job was the HK416. Once this leaked, interest in the HK416 exploded, but the writing was already on the wall for the rifle. Its reputation inside firearms and special operations circles was already on fire, and other special operations and law enforcement units from around the globe and at home begun to purchase it for their most elite operators. H&K also developed slightly downgraded, semi-automatic models for the civilian market—the MR556 and the MR308.

While SOCOM was playing with the HK416 back in the mid and late 2000s, the USMC was evaluating a variant of it as well as part of their decade-long Infantry Automatic Rifle (IAR) initiative. About a half dozen competitors put forward designs to fulfill the Marines’ needs. By 2009 H&K’s entrant was selected as the winner. It was quickly designated M27.

The IAR competition, and the resulting M27 that came out of it, aimed to replace the belt-fed M249 Squad Automatic Weapon (SAW) with a lighter more conventional automatic rifle that put an emphasis on accuracy and range over raw volume of fire. It is a large departure from a fairly well proven and established model, but it's just one example out of many regarding the changing ways in how USMC ground combat forces fight, and even how they are configured.

The M27 paired with a Trijicon 3.5X magnification ACOG sight and a bipod could reach out to 600 meters in a highly precise manner, and could perform area/suppressive fire out to 800 or so meters. Instead of carrying ammunition in 200 round box magazines or belts, the M27’s automatic rifleman would carry 20 30-round PMAGs that can also be used in M16s and M4s. The idea is that not only is the M27 less than half the weight of the SAW, but ammo could be more easily spread across a Fireteam. The M27s heavier contour 16.5 inch barrel and piston system could handle extended continuous fire, but it could also be extremely accurate, offering more maneuverability and overall flexibility.

The need for such a change came out of the lessons learned primarily in Afghanistan, where being able to hit a target at range was more useful than just spraying suppressive fire over closer ranges. The weight of the SAW, and it's less than favorable handling at extremely close range has also been a long-time drawback for the weapon.

After selecting the M27, the USMC spent the next few years deeply evaluating the weapon in multiple environments and combat-like situations. By 2011, four battalions that were deploying to Afghanistan were issued roughly 500 M27s as the exploration of the concept expanded into the operational realm. After glowing reviews from soldiers in the field, 6,500 M27 IARs were ordered, with all the rifles delivered by the end of 2013. Each Marine Fireteam has one automatic rifleman with an M27 or a M249 SAW, the SAW sticking around still for now as an option for certain missions where shear volume of fire is needed over the more balanced M27.

Then just this month, the USMC has put out an order for a whopping 11,000 M27s, which made some believe the Marines were looking to replace their assault rifles with the HK416 variant, or at least beginning to do so. There have been some signs that the Marine Corps may be interested in actually doing this. Just last November an entire battalion was equipped with M27s instead of M4s during an exercise as an experiment. Now it seems that the force wants to at least insert more M27s into arsenal, further increasing their Fireteams’ overall reach, accuracy, and if need be, volume of fire.

The M27s aren’t cheap, costing about four times that of the $750 M4, and the USMC moved to universally adopt the M4 for its rifleman over the M16 and longer barreled M16A4 just last year. As such it is unlikely the force will totally divest itself of M4s at this time, but it would seem that a slow, quiet transition could be afoot.

"I think the fundamental is the accuracy of the weapon, the idea that you're going to use it for suppressive fires. And at first contact you have the overwhelming superiority of fire from which all the tactics evolve… So it starts with the fire team and the squad, if you give them a better weapon with better fire superiority, you'll just put that vicious harmony of violence on the enemy.

As for what those more involved with the actual trigger-pulling think of the weapon, Chief Warrant Officer Christian Wade, the infantry weapons officer for the 2nd Marine Division, stated simply:

While the USMC falls deeper in love with H&K’s take on the AR-15, the US Army is doing the same for its bigger brother, a derivative of the .308/7.62 chambered AR-10/LR308, the HK417. A variant of the type won the Army’s Compact Semi-Automatic Sniper System contract last April which aimed to replace the Knight's Armament M110, which itself replaced the venerable M24 (Remington 700) bolt-action sniper rifle about a decade ago. Dubbed the G28, H&K’s semi-automatic sniper rifle is lighter (by about 3 pounds) and shorter (by about 3 inches) than the M110, but has familiar layout and does not sacrifice anything in terms of accuracy. About 75 percent of the parts used in the G28 are interchangeable with the standard HK417.

The Army’s contract for roughly 3,650 sniper rifles is slated to cost $44.5 million, which works out to roughly $12,200 per rifle, although the contract includes other items, like support and spare parts. Either way, the G28 isn’t cheap to say the least, but the best never is.

So what’s next for H&K’s AR-15 like rifle that has reached near mythical status? There has been some rumors that the Army may look at it as a replacement for their M4A1s, but this is unlikely, or at least it was unlikely under the past administration. The M4A1 supposedly takes the lessons learned from Afghanistan and Iraq and incorporates them into an overhauled version of the M4 carbine, which itself is really a shorter version of the M16A2 with some other small alterations. The M4A1 includes a heavier profile barrel for better durability during sustained firefights. The M4’s selector switch, which has semi-auto or three round burst, has also been replaced with one that allows for fully automatic fire. Ambidextrous controls have also been added.

The M4A1, the latest government reboot of Eugene Stoner’s direct impingement design that had its roots in the special operations community, has had generally good reviews from the field, but it not comparable to the HK416. And even the M4A1 was slated for another light upgrade under the M4A1+ program, which would add a quad-rail handguard and free-floating barrel design for enhanced customization and accuracy. Other smaller changes were also included like detachable iron sights, pre-camouflaged parts, flash suppressor and improved trigger group. Now that the Army is shelving these plans, there may be an opportunity to introduce the HK416, even if in a limited manner, although the basic M4A1 upgrade path still has years to go and will presumably continue until the end of the decade.

When it comes to “big Army” procurement, price is key. Doling out $3,000 rifles to infantry would mark a monumental increase in what the Army spends on each soldier’s weaponry. Also, the massive Army bureaucracy has an absolutely miserable—so funny if it weren’t true—track record when it comes to following through with long and meandering small arms replacement initiatives. But now that may be changing, as the service did just pick a new sidearmafter many years of trying, and a fairly unorthodox one at that. Also, change is clearly afoot in Washington when it comes to sequester and defense budgets. If the Trump Administration opens the floodgates on military spending, maybe the Army will trade in its Chevy Corvettes for Mercedes GTs—metaphorically speaking of course.

One thing is for certain, the HK416 and its many outgrowths is becoming the automatic rifle by which all others are judged. And considering it is packaged in a very American design concept, its penetration into the Pentagon’s small arms portfolio will only continue to deepen.

*Text updated to reflect Delta Force's involvement in the genesis of the HK416.