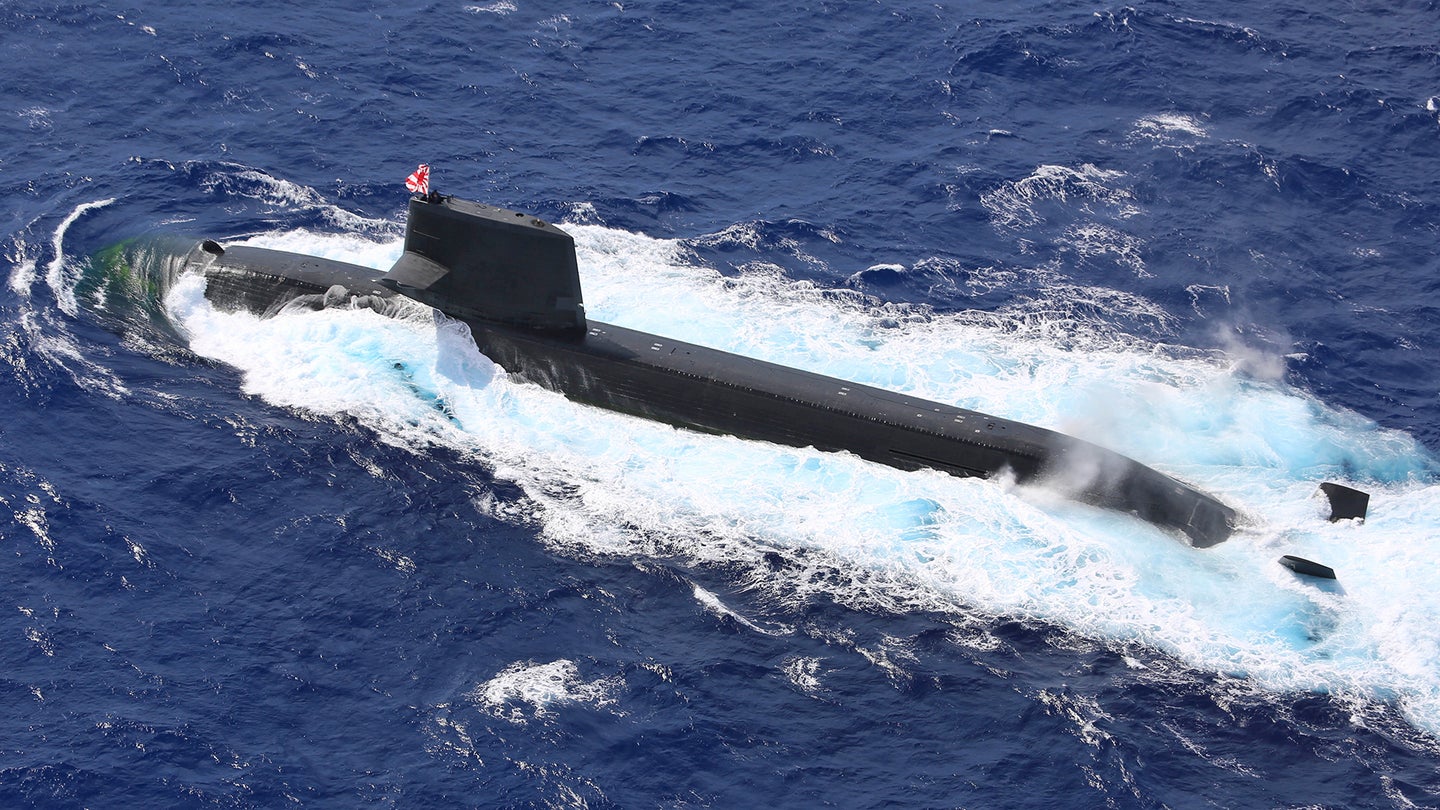 AIP technology describes an idea more than one strict submarine configuration. The same general concept can be achieved via multiple methods. The most modern versions range from using Stirling Engines, to the French MESMA (translated as autonomous submarine energy module) closed-cycle steam turbine system, to cutting-edge fuel cells to power the submarine while it is submerged for long periods of time. Each approach has its own advantages and disadvantages, with cost, complexity and technological risk being major factors beyond raw performance.

For instance, Sweden’s deadly but comparatively simple and proven Gotland class uses Stirling Engines for AIP, and although the technology is well proven and affordable, it also requires the boat to lug around liquid oxygen oxidizer, which can have its own dangers, as well as inert gas to mix with it. The Stirling engines and other infrastructure needed to make the system work, much of a relatively small submarine’s bulk gets taken up by the system. Additionally, Stirling Engine based AIP has many moving parts, which can make noise even when a high-degree of soundproofing is designed into the submarine.

Sweden leased a Gotland class submarine to the Navy in the mid 2000s to work as an aggressor boat. It proved to be a very dangerous enemy, with its AIP technology causing major concerns among US Navy tacticians. The impact of these prolonged war games are still being felt today (US Navy photo):

The French MESMA form of AIP, as used in Pakistan’s Agosta 90B class, is far more complex than the Stirling Engine AIP concept. It basically acts in a similar fashion as a nuclear reactor, although it uses ethanol and liquid oxygen combustion to generate steam, not a nuclear reaction, to spin a turbine and generate electricity. Once again, the boat has to lug around ethanol and volatile liquid oxygen as well as complex machinery—which produces noise—to make the system work, but it can produce a lot of power, which is good for high-speed operations. Cost is a major factor as MESMA is not a cheap technology to acquire or maintain.

Finally, fuel cell-based AIP, although very high-tech and not capable of quickly ramping-up its power output like say a MESMA configuration can, is very quiet as there are few moving parts in the system. It also is a very efficient system for long endurance missions. So if you don’t have to sprint very fast but have to stay silent and stealthy for long periods of time, the technology has huge benefits. It is thought that Australia’s upcoming Shortfin Barracuda submarines, of French origin, will use fuel cell AIP propulsion. These massive submarines will offer as close to nuclear propulsion capabilities as possible. Israel's latest Dolphin class boats also use fuel cell AIP, which makes sense as they work as Israel's second-strike nuclear deterrent.

All sensors and weapons being equal, a Navy has to justify what type of diesel electric submarine to choose based not just on cost but also on what type of tactics they aim to employ and what type of combat environment they are most likely to fight in. For instance, if long-range patrols and ambush tactics are common, along with the need for maximum stealth, fuel cell AIP technology may be best. If bursts of high-speed during attack and evasion maneuvers are needed often, along with high endurance, MESMA may be most appropriate. For shorter-range littoral combat operations, the Stirling Engine-based AIP technology may make the most sense. The thing is that with the large leaps in battery technology realized over the last couple of decades, AIP technology may soon face serious competition in the world of submarine warfare.

The first electric submarine was the Peral Submarine built for the Spanish in 1888:

High-tech diesel-electric submarines may begin to return to their simpler roots as Japan is pioneering a concept today that aims to eliminate AIP altogether. Their next generation Soryu class diesel-electric attack submarines will be equipped with lithium-ion batteries, and just like submarines dating back before World War I, they will run undersea on battery power alone.

The Soryu class is already a very modern submarine, having been introduced into service just over a decade ago. As an outgrowth of the previous Oyashio class, these are not tiny boats, displacing 4,200 tons submerged and measuring 275 feet long, They are the largest submarines Japan has constructed since the end of World War II. They also feature an “X” tailplane configuration for extreme maneuverability in tight littoral environments.

The profile of the Soryu class (Mike1979Russia/wikicommons):

Today seven boats are operational, all of which leverage Stirling Engine AIP technology licensed directly from Kockums—the same Swedish company that produces the Gotland class. Japan, an island nation with long and complex coastlines, uses its submarines to patrol its territorial holdings and to protect its shores. As such, the proven and affordable Stirling Engine-based AIP technology, paired with the class’s large size and ample fuel reservoirs, was a good, balanced fit for their needs. But now Japan wants to eliminate AIP technology altogether without losing its benefits, and in doing so free up room for other capabilities while also simplifying design, construction and sustainment of their future submarines. Above all else, this new configuration should result in quieter operation than most existing AIP capable submarines.

The idea is to install thousands of lithium-ion batteries along with powerful diesel engines and generators, as well as large exhaust and intakes stacks to accommodate them, into a tweaked Soryu design. A new power handling system that can deal with high power loads and optimize efficiency is also included in the concept. Basically, the configuration is similar to a standard diesel-electric submarine, that uses diesel engines and batteries alone for propulsion, but infused with new technology.

Lithium-ion batteries have a ton of advantages over their old-school lead-acid cousins. They keep up their output even when their charge runs low, they are lighter than lead-acid batteries, they can be charged exceptionally fast (hence the more powerful diesel engine and generators), and they can store much more energy. Compared to the AIP system they aim to replace, endurance should be similar, while the overall boat’s propulsion system design will be less complex and bulky. Not just that, but lithium-ion batteries can provide large output on demand, allowing the boat to dash mush faster while dived compared to one running on an AIP system.

The main downside to lithium-ion batteries is very well publicized: they are known to “runaway” and combust—exactly what you don’t want on a submarine. When they do so they produce very high heat, give off toxic fumes and expel conductive dust. They are also hard to extinguish using traditional means. But because weight is not as much of an issue on a large sea-going vessel, new methods of abatement can be put in place to lower the risk of a fire and its potentially catastrophic results.

Suppliers are working with Japan’s Maritime Self-Defense Force to overcome these concerns by building larger lithium-ion cell matrices with reinforced boundaries and enhanced chemistry that is less susceptible to these types of events. Extensive short-circuit, saltwater intrusion, drop and impact testing has also been done to certify the batteries for such critical use. Also, a specialized fire extinguishing system will be installed aboard advanced Soryu boats to neutralize a fire quickly and automatically in its battery compartments should one occur.

Lithium-ion batteries have had their problems in aircraft and in submersibles before, but Japan is investing billions into making the technology work, with the last three Soryu class boats being earmarked for lithium-ion propulsion. The seventh boat in the class, which is in the water now, may also use lithium-ion batteries, although it may be in combination with the four Stirling Engines found on earlier models. This boat could act as a “bridge” between the new all lithium-ion battery configuration and the older AIP configuration and could also serve as technology demonstrator for fielding the new batteries on a smaller scale aboard a submarine.

With this new Soryu class configuration, Japan has the potential to raise their profile as builders of an excellent class of attack submarine to the realm of world leader in new conventionally-powered submarine technology. This could mean serious exports if the type proves to be reliable and safe.

Down the road, the success of Japan’s lithium-ion battery powered subs could also mean a large cut in price for their AIP-like capabilities. Not just that, but other configurations, where existing AIP technologies are paired with lithium-ion batteries could also emerge, offering the best of both worlds for some users. The pairing of lithium-ion batteries and fuel cells for instance could result in highly capable and versatile submarines that feature extreme endurance, very quiet operation, fast acceleration and high dash speeds. In fact, there are rumors that China is working on pairing lithium-ion batteries with its own AIP submarines right now. But such a hybrid design would come at greater cost and complexity than what Japan or most navies require.

A diagram of the so called "Super Soryu" class of submarines that was intended to fulfill Australia's requirement for a new advanced attack submarine. It would have used lithium-ion batteries instead of AIP and many thought it was a favorite to win the tender. In the end DCNS won with their Shortfin Baraccuda concept that supposedly leverages fuel cell AIP technology. Considering the extreme range requirements that Australia puts on their submarines, it really is no surprise that even the enlarged "Super Soryu," which was designed for more territorial operations, was passed over:

The US Navy, which got out of the diesel-electric submarine business 27 years ago, has since experienced a submarine deficit, one that has no sign of abating. If Japan is successful in proving that higher-tech, yet simpler and possibly cheaper lithium-ion powered diesel-electric submarines can achieve similar or better performance as AIP equipped boats, all with less of equal acoustic signature as the best nuclear submarines, the US should move to adopt the technology.

The USS Blueback was the last diesel-electric submarine in the US Navy's fleet. For years it worked as aggressor boat, but by 1990 the Navy had moved on to an all nuclear submarine force. Blueback was featured in Hunt for the Red October and now resides at Oregon Museum of Science and Industry:

As we have discussed before, there is every reason for the US Navy to invest in diesel-electric submarines now that they have evolved so much over the last three decades. For so many missions, a nuclear submarine is not needed, and their massive infrastructure needs and security concerns makes forward basing them in foreign countries impossible. But now that AIP may not even be needed, the Navy could solve its attack submarine capacity woes by adopting Japan’s technology and building their own version of the advanced Soryu class under license. This would provide the highest-tech solution at the lowest possible cost. Roughly four Soryu class boats could be bought for the price of a single Virginia class SSN today. If a Soryu derivative were put into wider serial production, their price would drop event further. Sadly, the politics and special interests behind naval shipbuilding in the US, and especially submarine building, along with the Navy’s blind unwillingness to deviate from its nuclear only submarine strategy, makes such a logical proposition all but impossible to realize.

Regardless of the US Navy’s elitist obsession with keeping an all nuclear submarine force, it will be interesting to watch Japan as they move forward with fielding their first lithium-ion powered diesel-electric attack submarine. And don’t expect them to be shy about possessing such a capability. Once they have found the technology to be stable they will likely show it off in an attempt to offset their investment with export sales.