Check Out This Infographic Of Sea Shepherd’s Growing Naval Armada

Sea Shepherd’s fleet has ballooned in size and capability over the last decade. 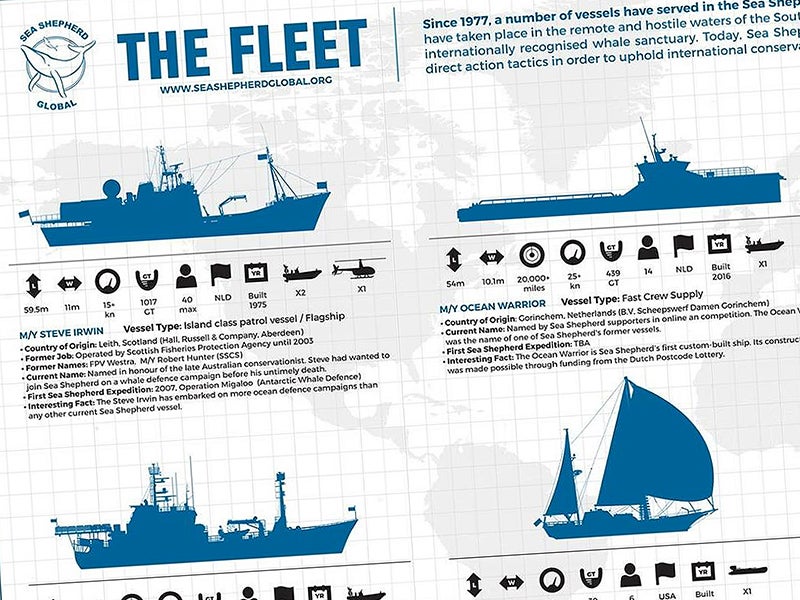 Some see them as heroic sentinels of the world’s oceans and other see them as ecoterrorists. However you feel about about the Sea Shepherd Conservation Society and its use of “direct action” tactics, you have to hand it to them—they built up a diverse and formidable fleet over the last decade.

Sea Shepherd, with its monk-like figurehead Captain Paul Watson, had been going about its business for decades alongside other eco-activist organizations like Green Peace, but once “Whale Wars” aired in 2008, their notoriety and public awareness exponentially increased, as did their coffers. The show took viewers aboard Sea Shepherd vessels for their most dramatic, complex and high-risk yearly operation. These months long campaigns aimed to stop, or at least greatly curtail, the Japanese whaling fleet’s harvesting of hundreds of whales in the Southern Ocean Whale Sanctuary near antarctica. By most accounts, the group has been successful at doing just that.

The show brought in viewers from both sides of the issue because it was just downright fascinating to watch. Maybe the most interesting aspect of the show was that it really depicted a less-than-lethal—hopefully—military game of cat-and-mouse between Sea Shepherd’s forces and those of the Japanese whaling fleet. High-speed harpoon boats were turned into clandestine reconnaissance and intervention vessels, helicopters and UAVs were put to work scanning for the elusive whaling fleet, small boats were sent swarming, and ships ventured where they really shouldn’t with massive storms, dangerous icefields, and a relatively green crew being as much a threat to the mission’s success as anything else.

The big payoff came some seasons when Watson’s fleet converged on the massive factory ship—a ominous vessel surrounded by harpoon ships where whales would disappear up its bloody stern ramp to be processed for “science” and packaged for future sale. Often times paint would be traded between vessels, and in some cases ships would even be sunk during bizarre maritime jousting. It was amazing television that had flavors of ancient naval warfare and science fiction all rolled into one, and for many fans, the cause was extremely just.

Eventually production of the show was curtailed due to a maze of legal issues, but by that time, with dozens of episodes under its belt and main characters fully established, Sea Shepherd became a household name. The international non-profit group was receiving big checks for new ships, high-tech equipment, and its never ending legal defense on multiple fronts. Now, after years of being out of the the cable TV spotlight, the controversial group has only grown their operation with major celebrity supporters on their donor and ambassador roster.

This awesome infographic Sea Shepherd put together shows the details of their fleet as it stands today: