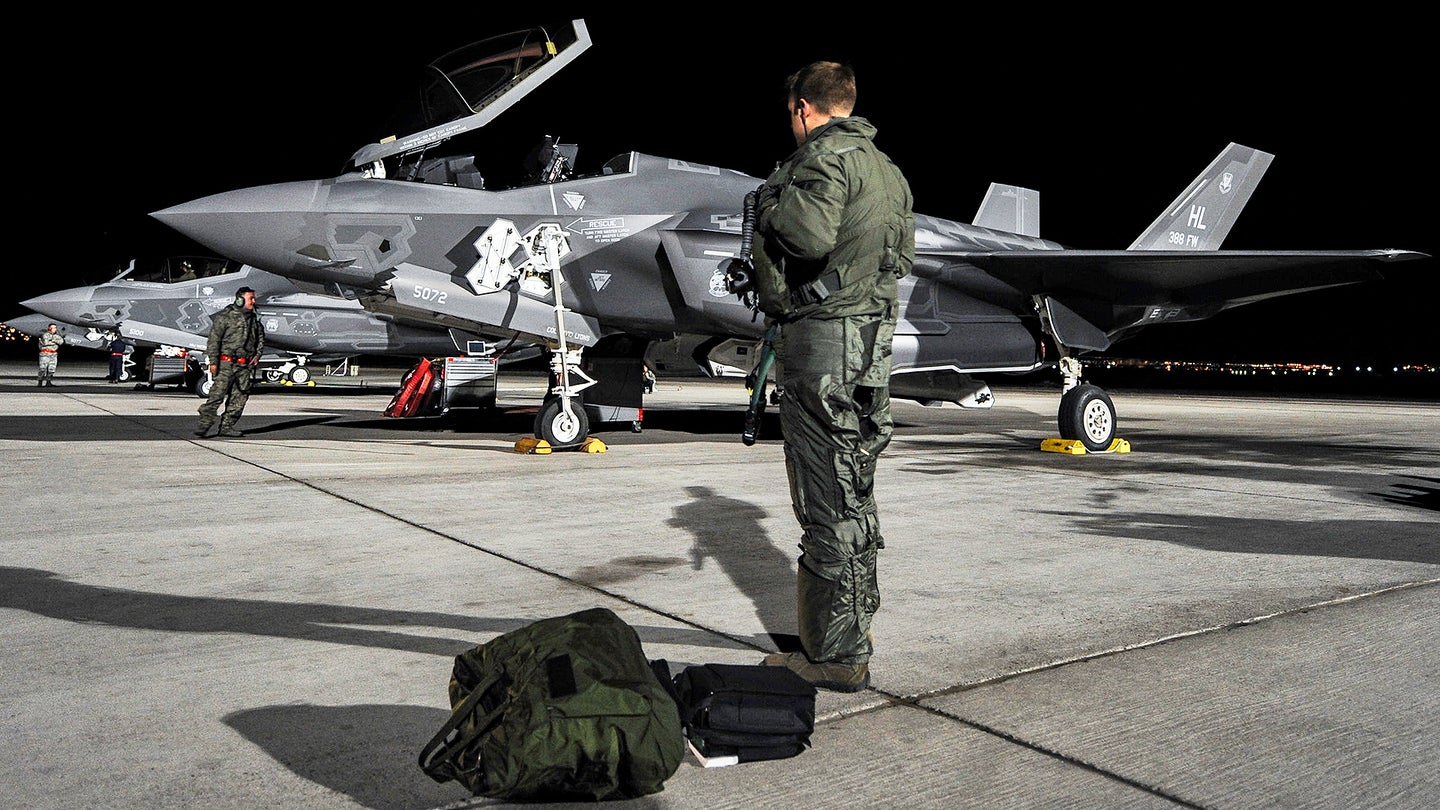 The media has run wild with reports that 13 F-35As from Hill AFB have made an impressive showing at the USAF’s largest air warfare exercise, Red Flag. Most notably, a kill ratio of 15:1 has been touted, which traditionally means the F-35 has suffered one loss for every 15 enemy aircraft it has killed.

This version of Red Flag, which only includes aircraft from the US, UK and Australia, has supposedly been tailored with more challenging surface-to-air missile and adversary aircraft threat profiles. Layered enemy air defense systems and a higher degree of electronic warfare are said to have been present. Reports state that F-35s have done well taking on these air defenses as part of a massive strike package that included many types of US and coalition aircraft, including F-22s.

The problem is that the limited amount of information we have from an air exercise that produces hoards of data really does not give an accurate picture of what the F-35 contributed, or how their performance compared to that of other platforms. The 15:1 kill ratio in particular is nebulous, because it seems this may be skewed in terms of what data it actually includes. Kill ratios attributed to a platform naturally make us think of direct engagements with enemy aircraft, but Red Flag is a highly integrated air battle, one that always uses the latest data-link fusing gateways and other force-multipliers. It remains unclear whether the stated kill ratio is strictly attributable to the F-35, or if it includes the actions of other coalition aircraft, particularly F-22s, while the F-35 is merely present.

In other words, did one F-35 die per 15 enemy aircraft killed strictly by the F-35’s own hand, or did those enemy aircraft die while the F-35 was merely involved in the battle? The F-22As from the 27th FS were integrated into this Red Flag, as were APG-63V3 AESA radar toting F-15Cs from the 159th FS. The UK brought their highly capable Typhoon FGR4 to the exercise as well, and these are just the high-end air superiority players; other fighters, including F-16s, were also present. That’s a lot of counter-air capability in the air at one time, all with various advantages and disadvantages, feeding their data into one common fused data-link picture. In addition, they were assisted by an armada of support aircraft, including the most capable jamming and information, surveillance, and reconnaissance platforms in the world.

Even if the kill ratio strictly depicts what F-16Cs of the 64th Aggressor Squadron were shot down by F-35As and a visa-versa (at this time we know of no other disclosed red air players), without more information as to the rules of engagement, what weapons were available, what threat profiles the adversary aircraft were flying, what missions were the F-35As partaking in when the kills occurred, and what third party support both sides had at the time of each kill, these kill ratios can only be seen as anecdotal. This is just the nature of a large combined forces exercise: nothing happens in a vacuum.

Also, the 64th AGRS flies Block 32 F-16Cs, the least capable in the USAF inventory. Some pack Israeli-built Elta ELL8222 self-escort jamming pods, which can play havoc on the opposition’s ability to target the host aircraft. But these F-16s have radars that are relatively old and they do not sport any sort of infra-red search and track system, which is the biggest air-to-air sensor threat to the F-35A, one that is often found on modern enemy aircraft. Not just that, but unless things have changed for this Red Flag, the aggressors rely entirely on Ground Control Interception (GCI) radar controllers to guide them to their targets. Meanwhile the “blue force” uses much more capable airborne early warning and control (AEW&C) platforms that often use radars that are more capable at detecting low-observable targets than their smaller X-band fighter-borne fire control radar counterparts.

How can we really judge F-35A’s supposed kill ratio without knowing those of other platforms used in the exercise, or even historical numbers from other exercises? For instance, what was the F-15C’s kill ratio? Or the F-22’s? What about the Royal Air Force’s Typhoons? How about red air’s corresponding kill ratio? 15:1 sounds great, but it really is about the same as what the US Navy experienced with their Topgun graduates in Vietnam, a time when F-4s were taking on MiG-17s and MiG-21s. In the end we have nothing to compare this number to, and “lesser” platforms could have gotten as high a ratio or even higher, we just don’t know.

None of this is really a mark against the F-35A. It could have performed even better than we know at this time. It certainly seemed by most accounts that it did well regardless of what kill ratio has been reported, but keep in mind that any major issues with the type that surfaced during Red Flag is very unlikely to get a public comment by those involved directly with the program. I have been to Red Flag multiple times, sat in the media briefs and aircrew panels, and asked some tough questions. But if you think a F-35 pilot is going to come out and say “well we did ok, but we kept having data-exchange issues between jets and the S-300 SAM guys were using some unorthodox tactics to detect us farther away than we would have liked” than I have an airworthy F-32 to sell you.

This is not the first time a small amount of unexplained air combat data was put forward as proof that a fighter aircraft was trouncing the competition, and especially for the F-35. Red Flag in particular has had its share of controversy surrounding the issue in the past. So sure, 15:1 kill ratios make for catchy headlines, I think this one is my favorite so far, but without more data to back and explain such claims, those headlines are naive at best and disingenuous at worst.

Statements like the this one from Lieutenant Colonel George Watkins, the commander of the 34th Fighter Squadron, offer a more credible view of how the F-35A performed in Red Flag as part of the total force:

“Before where we would have one advanced threat and we would put everything we had—F-16s, F-15s, F-18s, missiles, we would shoot everything we had at that one threat just to take it out—now we are seeing three or four of those threats at a time. Just between [the F-35] and the [F-22] Raptor we are able to geolocate them, precision-target them, and then we are able to bring the fourth-generation assets in behind us after those threats are neutralized. It’s a whole different world out there for us now...When you pair the F-22 and the F-35 like together with the fourth-generation strikers behind us, we’re really able to dominate the airspace over the Nellis test and training range.”

The F-35A also stayed around after their munitions were dropped to soak up electronic intelligence on the enemy, a role the aircraft is especially adept at.

The F-35 also had great availability, supposedly 92 percent, and did not miss a mission due to maintenance issues. But this metric can also be skewed as the parts supply chain is flooded and contractors are usually on hand to prop up these numbers during a modern combat aircraft’s operational debuts (see the MV-22).  This is just how the industry works with the DoD to make their systems look great during high-profile deployments among the first operational squadrons. Case in point, the F-22 had a 97 percent mission-effective rate during exercise Northern Edge in 2007, completing 102 of 105 assigned sorties. What is the F-22 fleet’s readiness rate today? Around 67 percent, give or take a few points. Also, 13 F-35As from the 34th Fighter Squadron were present at Red Flag—that’s a large amount of aircraft from a single unit, with most squadrons historically deploying six to eight jets for the exercise. This larger amount of available aircraft would have bolstered the unit’s mission completion rate.

So once again, this readiness figure should be taken anecdotally—as a good sign, but not as conclusive evidence that the jet will perform anywhere near that level during normal fleet operations.

Another issue when it comes to these reports on how the F-35 performed during Red Flag is that the exercise was just starting its second week when they were published. Over the course of Red Flag—which usually runs two weeks—things get tougher during not easier. So once again, the notion that these are the final results of the exercise is far from accurate.

So what we end up with here is grab bag of hyperbole mixed with some truth, and a whole lot of unknowns sprinkled on top. In the end, the F-35 seems to have done well for its second Red Flag showing, the Marines having made it to the last Red Flag with their F-35Bs. Considering that the aircraft has been in development for twenty years and has been flying for over a decade, this at the very least should be expected. Setting the bar so low as to tout that a 5th generation fighter that has cost monumental piles of cash to develop and still runs $100 million a copy, can trounce 30 year old 4th generation fighters, not even particularly advanced or highly equipped ones at that, is just foolish. Not just that, but the F-22 had proved that 4th generation fighters are no match for 5th generation ones over a decade ago, and has done so time and time again since.