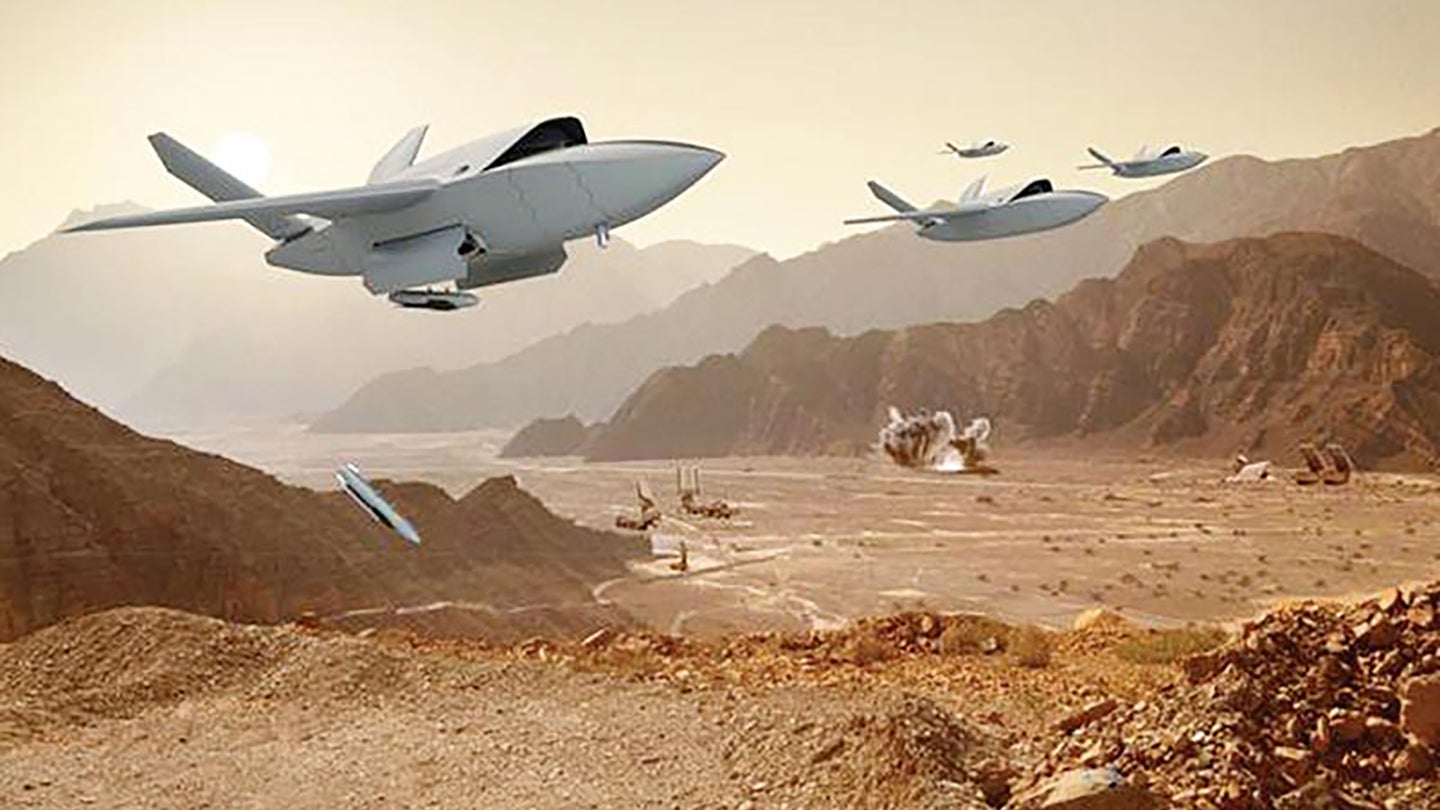 Last Summer we reported in detail about Kratos partially self-funded, semi-disposable unmanned air combat vehicle (UCAV). Now the company has released new details on their design, including its designation—XQ-222.

Kratos, who are world renowned for building target drones that simulate enemy aircraft and missiles, has designed the XQ-222 in concert with the Air Force Research Laboratory under the Low-Cost Attritable Strike Demonstration (LCASD) initiative. According to Aviation Week,  LCASD aims to be able to eventually field a optionally reusable, highly adaptable, low-end unmanned combat air vehicle for $3 million apiece for batches of up to 99 aircraft per year, or $2 million each for yearly orders of 100 or more. In essence, the LCASD concept is “high-volume” both in the strategy behind it and in terms of procuring it affordably.

The company, which could realize a whole new portfolio of business if their design makes it into production, has invested millions of its own dollars into the XQ-222—$40 million to be exact compared to just over $7 million in Pentagon funds. But they aren’t the only ones eyeing LCASD as an off ramp to a whole new emerging defense marketplace.

Originally it was thought that the XQ-222 would be a light rework of an existing Kratos drone design, but instead the company appears to have gone much further. It is described as a large unmanned aircraft with a relatively massive range. The design features a whopping 1,500 mile combat radius when being operated as a reusable drone, or it can fly a 3,000 mile one way trip when being used as in a disposable manner. This would allow it to strike anywhere in North Korea (and recover back in South Korea or Japan) from Guam, or it could travel nearly 1,000 miles inland from Chinese shores along the Taiwan Strait if launched from Guam. It could also fly from Okinawa to China’s man-made islands in the South China Sea and back.

Basically the XQ-222, and the LCASD initative as a whole, is really a melding of multiple existing air combat concepts. These include that of smaller optionally disposable "suicidal" drones that are becoming increasingly popular, mixed with that of a higher-end fighter-like UCAVs, as well as that of an enhanced cruise missile. Their job is not to be a "top end" asset—being the very best at any one role—but to be more flexible and employable than their less adaptable or far more expensive counterparts.

The XQ-222 will carry a 500-lb payload, which gives it at least a pair of Small Diameter Bombs at its disposal. Extra surveillance, jamming and other equipment could be fitted instead. Larger payloads could likely be carried with a reduction in fuel storage and, as a result, the XQ-222’s range.

The optionally disposable UCAV’s design has stealthy properties, including a trapezoidal fuselage with a chined edge, V-tails, and an S-shaped air intake set high above the aircraft’s fuselage. The wing is also similar to the one found on the stealthy Predator C/Avenger, as is its exhaust, which is optimized to decrease the drone's "viewable" infrared signature from the rear hemisphere. Like many other stealthy missiles and drones, the XQ-222’s low observable design philosophy and general configuration harkens back to Northrop’s Tacit Blue technology demonstrator of the early 1980s. It also has a strong resemblance to something between EADS’ experimental Barracuda UCAV and KAI's indigenous UCAV concept.

What also makes the XQ-222 exciting as a low-end UCAV is that it launches via rocket assisted takeoff from a stand and lands using a parachute. In other words, no airfield is needed to launch or recover this unmanned aircraft system. This means you can threaten an enemy at long distances from virtually anywhere. This form of distributive lethality is especially relevant in the vastness of the Pacific Theater, where in a peer state conflict, known US master airfield installations would be targeted by multiple types of standoff weaponry. The tiny logistical footprint of the XQ-222 means that it operate from pretty much anywhere a C-130, small logistics vessel, or group of trucks can access.

Transit times to cover the XQ-222 substantial range are helped by its high subsonic speed capabilities—up to .9 mach—which means these aircraft could also be used alongside manned combat aircraft one day. “Tethering” or the “Loyal Wingman” concept is already being played with in various domains. One of which is with another Kratos product—a version of the BQM-167A sub-scale aerial target drone that has been adapted for testing such a concept under the $50 million Unmanned Tactical Aerial Platform-22 (UTAP-22) initiative. The UTAP-22 can fly as high as 50,000 and can carry 350lbs of stores internally and 200lbs externally for three hours or nearly 1,500 miles.

A “wolf pack” of UTAP-22s have already flown alongside a Harrier during a series of tests at NAWS China Lake late last year. During these test sorties UTAP-22 drones were able to support the Harrier’s mission in a semi-autonomous or autonomous fashion.

Now U.S. Strategic Capabilities Office and Strategic Command are sponsoring a larger test of the UTAP-22 concept later this year at a yet to be identified major aerial warfare exercise (likely Northern Edge 2017). This exercise will see a number of UTAP-22s used in a cooperative swarm. In the end Kratos thinks they can field orders for a production version of the UTAP-22 for around $3 million each. That is a small price to pay for a reusable and versatile tactical drone that can do the dirtiest of air combat work.

Such a system can also breathe new life and value into older tactical platforms, like the F-16 and Harrier, by giving them a whole new set of capabilities for operating in or near contested airspace. By ordering UTAP-22s to jam, strike, or distract enemy air defenses, a manned and much more expensive fighter aircraft can access new areas of the battlespace with minimal external support. In essence, a whole new series of manned fighter tactics can be developed around tethering.

In the end, the UTAP-22 and the XQ-222’s target drone roots and relatively low cost mean that they can also play the role of decoy during the opening stages of a high-end air war. Along with Miniature Air-Launched Decoys, which are much more limited in terms of range,  these new optionally expandable, relatively cheap yet high-performance combat drones can play the role of an incoming attack force. They cannot only stimulate the enemy air defense network, but after doing so they can also deal it a series of blinding blows. If the have the range to do so, those who live can return home to be used another day.

These relatively inexpensive semi-autonomous unmanned combat drone concepts are part of the Pentagon’s “third offset strategy” for developing new capabilities suited to take on a high-end foe in the future. Although they are an exciting step in the right direction, the Pentagon still remains totally mum when it comes to even discussing the higher-end on the unmanned combat aircraft spectrum. It is as if advanced unmanned combat air vehicles, that could and should replace fighter aircraft at least partially, don’t even exist as a concept. We have discussed the implications of this strange reality in great detail, but projects like Unmanned Tactical Aerial Platform-22 and Low-Cost Attritable Strike Demonstration give us just a glimpse of how deeply revolutionary the UCAV can be if it were extrapolated to its logical end.