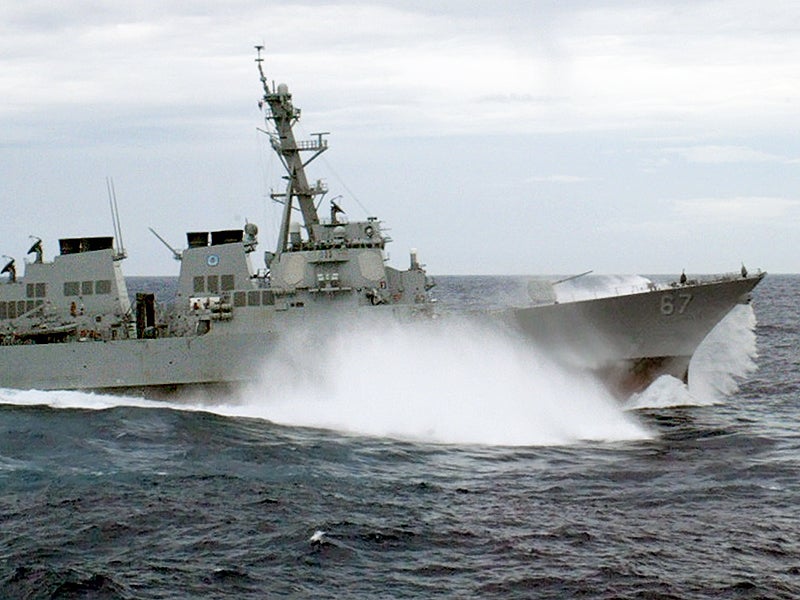 The same Arleigh Burke class destroyer that was tragically attacked by a boat-borne suicide bomber while anchored off Aden 17 years ago has been ordered to patrol Yemeni coastline following a recent successful suicide bomber attack on a Saudi frigate. Two other US Navy ships are also in the area, including the USS Makin Island and the USS Comstock, both of which are lumbering amphibious assault ships. But the Cole has been specifically assigned to put its high-end surface and anti-air warfare capabilities to work to respond to any incidents that occur in and around the vital Mandeb Strait.

The deadly attack on the Saudi frigate, which killed two sailors and injured three others, came after a spate of anti-ship missile attacks on UAE and US Navy ships last October. These attacks culminated in a counter-attack via Tomahawk cruise missiles that targeted Houthi controlled radar stations and launch positions along Yemen’s western coastline. It also occurred in succession with another Iranian ballistic missile test, a move that many claim was  in defiance of existing UN resolutions. The new Trump administration, which is loaded with hardliners when it comes to the Iranian issue, has reacted strongly to both events.

First off they view the attack on the Saudi frigate as one meant for a US surface combatant, although the evidence to justify such a conclusion remains questionable. Although Iran actively backs Houthi rebels who carried out the attack, aside from some cameraman yelling death to America and death to Israel while filming the attack, no other evidence is known to exist that points to the perpetrators specifically targeting a US ship instead of an Iranian one—or any other ship that would have presented itself for that matter.

Secondly both Trump and his National Security Advisor, ousted intel general Michael Flynn, have made it clear that Iran is now “on notice” (whatever that means) and have announced new sanctions against Tehran. Interestingly these sanctions have been designed carefully not to affect the P5+1 nuclear deal Donald Trump heavily maligned during his campaign.

Now with tensions dramatically increasing between Tehran and Washington, and with the Cole off the Yemeni coast—both a symbol of American resilience to terrorism and the country’s spotted history in Yemen—as well as representing a major military challenge to Houthi rebels—we will have to wait and see what happens next. If the Cole is attacked, and there is a good chance it will be based on the events of the last few months, it could lead to a wider conflict not just in Red Sea or Gulf of Aden, but also in the simmering waters of the Persian Gulf.

Also worth noting, Fox News reports that Houthi rebels have begun mining the Mandeb Strait. If this is true, it would represent a dramatic shift in tactics by the group and a threat to the region and the global economy. I have found no information supporting this claim, but I’ll keep an eye on it. Mining of the strait—or the ability to do so on short notice—fits in with my original analysis of Tehran’s long play is in region.