The “equal opportunity” air wars of the last 16 years, where F-16s fought men with rusty Ak-47s living in mud huts, have left America's fast jet fleets broken and their communities overtaxed. There's a better way, and the USAF may be finally realizing that. 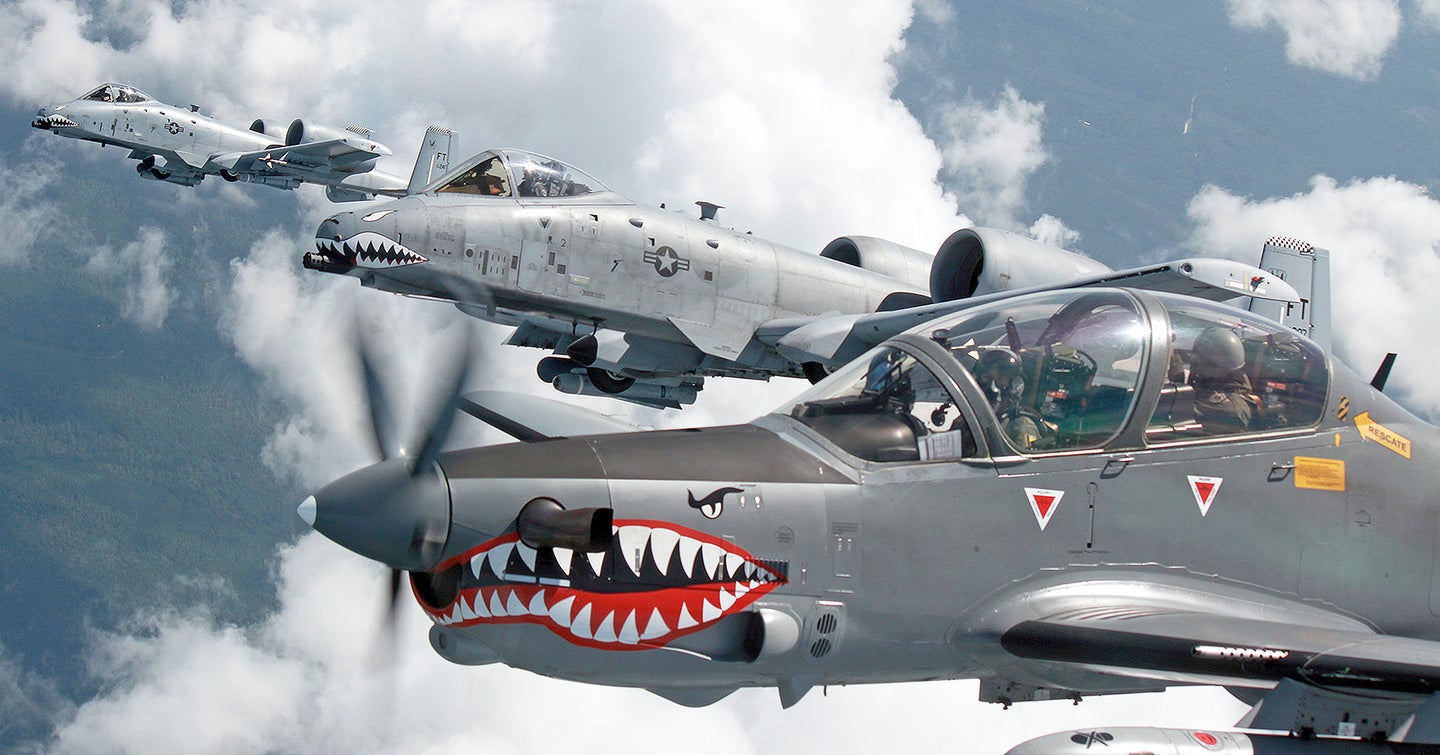 After literally flying the wings off its tactical fighter fleet over the last decade and a half of counter-insurgency operations in the Middle East, the USAF maybe finally coming to its senses about the need for a fleet of relatively inexpensive light attack and surveillance aircraft.

This has been one of my most passionate issues over my career (read about it on my first site, my second creation and here at thewarzone.com). Spending years watching the USAF fight men in mud huts brandishing rusty AK-47s and roaming around in Toyota Hilux pickups with high-performance multi-role fighters and heavy bombers was just about as absurd and wasteful as it gets.

The “equal opportunity” air wars over Iraq and Afghanistan, along with delays in the F-35 program and the shrinking of the overall tactical fighter force size, largely created the massive logistical crisis and crippling “fighter gaps” of today. And all of this was blatantly foreseeable, but the lack of imagination within the USAF and the powerful special interests that fear any competition for dollars for banner established programs, like the F-35, kept the procurement of a light attack and surveillance platform in relevant numbers a nebulous goal at best. Throughout the 2000s, light air support initiatives, both to arm our allies and ourselves, came and went, with next to nothing to show for them.

Not just that but Washington kept setting deadlines for withdrawal from Iraq and Afghanistan without providing Iraqi and Afghani forces with large numbers of platforms that can provide the same game-changing capability that was crucial to keeping the Taliban at bay and drastically weakening the insurgency in Iraq–that being precision air support and persistent aerial surveillance.

Even the Islamic State’s blitzkrieg across Iraq could have been detected sooner, and at least slowed, with such a capability in hand. Instead, Iraq waited and waited for watered-down F-16s, and only had a hodgepodge of attack helicopters and a small handful of Hellfire missile slinging Cessna Caravans at their disposal.

In 2015 a pair of surplus Vietnam-era OV-10 Broncos, upgraded with a capable sensor turret, a bevy of radios and data-links, night vision compatible cockpits, defensive suite, and the ability to sling laser-guided rockets went to war against ISIS over Iraq. They proved once again that in many ways a light attack and surveillance aircraft is far better than a fuel thirsty, fast flying F-16 or even a MQ-9 Reaper drone, with its soda-straw view of the battlefield, when it comes to fighting Islamic militants. Not just that but it can do the job with minimal basing right up near the front lines for around a couple thousand dollars and hour, not $22,000 (F-16), or even double that (F-15E).

In recent years the Air Force has pushed for studies on a low-end close air support alternative to fast jets. Most recently this has come in the form of the semi-official OA-X initiative, but the Air Force always seem to find a way to inject as much cost and technology into what is clearly a relatively simple requirement. Now, after so many years where the need has been dire, and the solution readily available in multiple forms, the USAF, under General David Goldfein, is actually embracing the idea.

Recently a white paper produced by Senator John McCain, in which he pushes for procurement of 300 low-end tactical aircraft to make out the bottom of a high-low tactical aircraft mix strategy, brought the issue back to the forefront. McCain’s paper states:

“The Air Force should embrace a 'high/low mix' of fighter aircraft. Very expensive fifth-generation technology is not needed in every scenario...These aircraft could conduct counterterrorism operations, perform close air support and other missions in permissive environments, and help to season pilots to mitigate the Air Force’s fighter pilot shortfall.”

The USAF Chief now wants to execute a fly-off of different off-the-shelf solutions for a light attack and surveillance aircraft to deem which one gives the best return for the USAF. Although this competition has not been funded as of yet, it seems as if the General wants it to be fast tracked as the cost would be quite low. Not just that, but he may be looking to bring foreign partners onboard. Wealthy middle eastern countries and NATO members in particular could save their precious fast-jet airframe hours for other threats, and use a light air support aircraft for fighting ISIS in a coalition environment.

All this sounds good, but here’s the hard truth: The USAF has been kicking this can down the road for well over a decade. The mission of fighting low-intensity conflicts in permissible airspace is not going to evaporate. The A-29 Super Tucano has already been selected, funded, fielded and is flying in small numbers within the USAF. This aircraft should be purchased immediately, 100 seems like a good number to start with, and sent to work in the fight against ISIS.

If the USAF wants it can buy two hundred more A-29s, or the fly-off Goldfein wants can be executed and higher-end alternatives can be evaluated—specifically Textron’s Scorpion. Then again, the USAF is going to experiment with the Scorpion anyway so what is the point of a fly-off? Additionally, the jet-powered Scorpion does represent capability creep for what should be the simplest and most cost effective solution, and a single turboprop aircraft, like the already in-inventory A-29 Super Tucano, will supply just that.

In the meantime, our tactical fighters, that are on life extensions already, continue to fly mission after mission against an enemy with no Air Force, all the while sipping tanker gas at $30 a gallon. Getting roughly 100 forward-based Super Tucanos into the fight ASAP will help alleviate the pressure on these airframes and their overworked communities. Doing so would also free up some of the Predator and Reaper communities for other missions as a small force of Tucanos can provide even higher quality persistent overwatch and armed reconnaissance than their unmanned cousins, also at lower cost.

Aggressively procuring and deploying a low-end light air support aircraft should not be just another backdoor way to justify retiring the A-10, it should be supplement to it. The two aircraft would be able to work together in synergistic ways and it is possible that the two communities could be blended as one. Additionally, the A-10 can fight in medium threat environments where say a Super Tucano could not. Considering that the USAF is already blowing money on ways to retain close air support knowledge base if or when the A-10 is retired, actually keeping the community intact via the A-29 represents a far smarter move with a better return on investment.

Eventually, it would be nice to see missions like the fight against ISIS being handled primarily by the light air support, remotely piloted aircraft (RPA), and A-10 communities. This would free up high-performance tactical aircraft, and even heavy bombers to some degree, for higher-end combat scenarios and training.

If the Air Force ever really ends up putting something like an A-29A into the field in relevant numbers, the realization and resulting shock will quickly settle in as to how poorly managed and mismatched the air power applied to over a decade and a half of counter-insurgency and close air support operations in the middle east has been. The amount of money wasted on fuel and airframe life alone for just a small portion of missions flown by existing platforms over Iraq and Afghanistan would have paid for a large fleet of light attack and surveillance aircraft many, many times over.