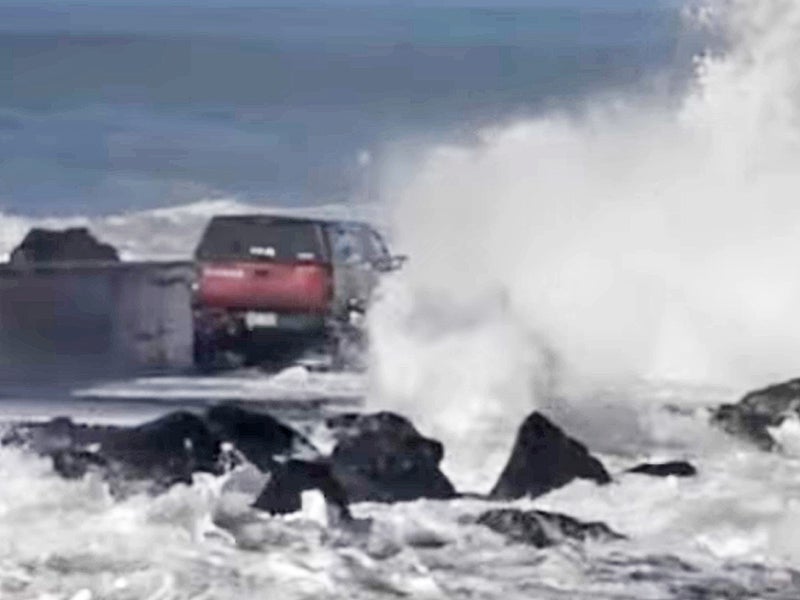 The fearless US Coast Guard gets some pretty strange calls, and saving people from hideously bad decisions make up a good portion of them. A great example of this came about last week when it was forecast that some monster swells would be pounding the northern California coastline, in particular the shores of picturesque Humboldt County.

Here was the USCG’s warning from January 26th:

"Overnight, the high swell has been traveling towards NW California coast. At around 11 pm Wednesday, Buoy 46015 saw wave height rise to 19 feet with a wave period of 19 seconds. This indicates a surf height of 27 feet. A High Surf Advisory is in effect for west and northwest facing beaches along NW California coast through 4 pm this afternoon. After that, sneaker wave threat will persist through Friday afternoon."

These monster swells always attract onlookers and photographers, but obviously getting anywhere near them is a horrible and possibly life ending idea. Apparently, a man in a Nissan pickup truck with Arkansas plates thought otherwise. At around 11AM last Thursday, he actually decided to drive out onto Humboldt Bay’s North Jetty directly in the crashing waves’ path. During his short voyage his truck was battered with waves from multiple directions, dropped into a ditch as was disabled. What happened next is depicted below in the video filmed by a much more safely conscious observer, Tyler Whiteside:

After onlookers saw the man making the drive out onto the jetty and immediately get stuck, they called 911. The Coast Guard was on site within minutes with a 47 foot lifeboat and a MH-65C Dolphin helicopter from nearby USCAS Humboldt Bay. A land or water rescue was deemed impossible, so the MH-65 was the only viable option.

The Dolphin crew seemed to pick the perfect time to winch down the rescue swimmer to pluck the man to safety. The danger involved in such a rescue operation could not be anywhere more clear. The rescue swimmer is tied to a winch-line attached to a helicopter hovering in the wind above, surrounded by unforgiving concrete and a vehicle weighing thousands of pounds that can be thrown around like pool toy under the power of the crashing waves.

Amazing work once again by the heroes of the USCG. It is just awesome what these people do on a daily basis.