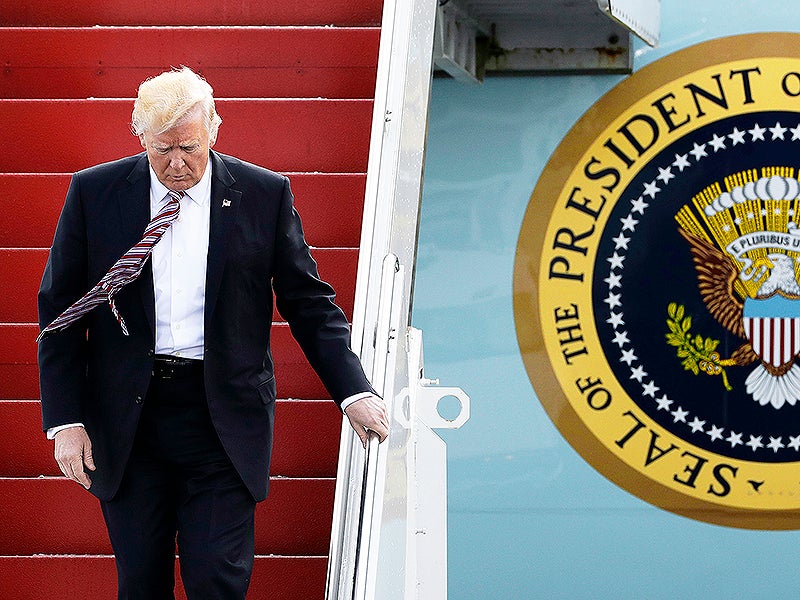 Although Trump forgot the signature “turn and wave” before entering Air Force’s One’s forward cabin door, he did seem to settle right in on the aircraft. He quickly took up shop in the President’s office, his large leather chair draped in a new custom-tailored Commander In Chief Air Force One jacket.

Aboard the Trump invited pool reporters and photographers into his office for a photo op, where he commented “Beautiful… Great plane… Really beautiful” about his new flying office. When asked how it compared to his personal 757, he said “Well that’s a good one too, but this is a very special plane, for a lot of reasons outside of just being a plane.” Trump seemed more excited about his new jacket than anything else stating “They just gave me that, pretty cool jacket right?” He then turned tables on the reporters asking how flying conditions were on the famous jet and asking “do you like this better than your other plane? I think so, right? You hit the big time right?”

Trump has a long history with large lavish jets and helicopters and probably knows more about the subject than any President before him. He has also very publicly questioned the cost of the USAF’s Air Force One replacement program, taking Boeing to task on the price. We’ll still have to see how that all pans out, but for now he seems more than happy with the aircraft he has inherited from Barack Obama and it is yet to be known how much he plans to travel as the 45th President of the United States. If history tells us anything, each President has taken to the air more than their predecessor. It’s pretty unlikely that will change under the Trump administration.

Barack Obama’s Last Flight As President Aboard Air Force One

Saying goodbye to the White House is tough, but doing the same to Air Force One is likely much harder.