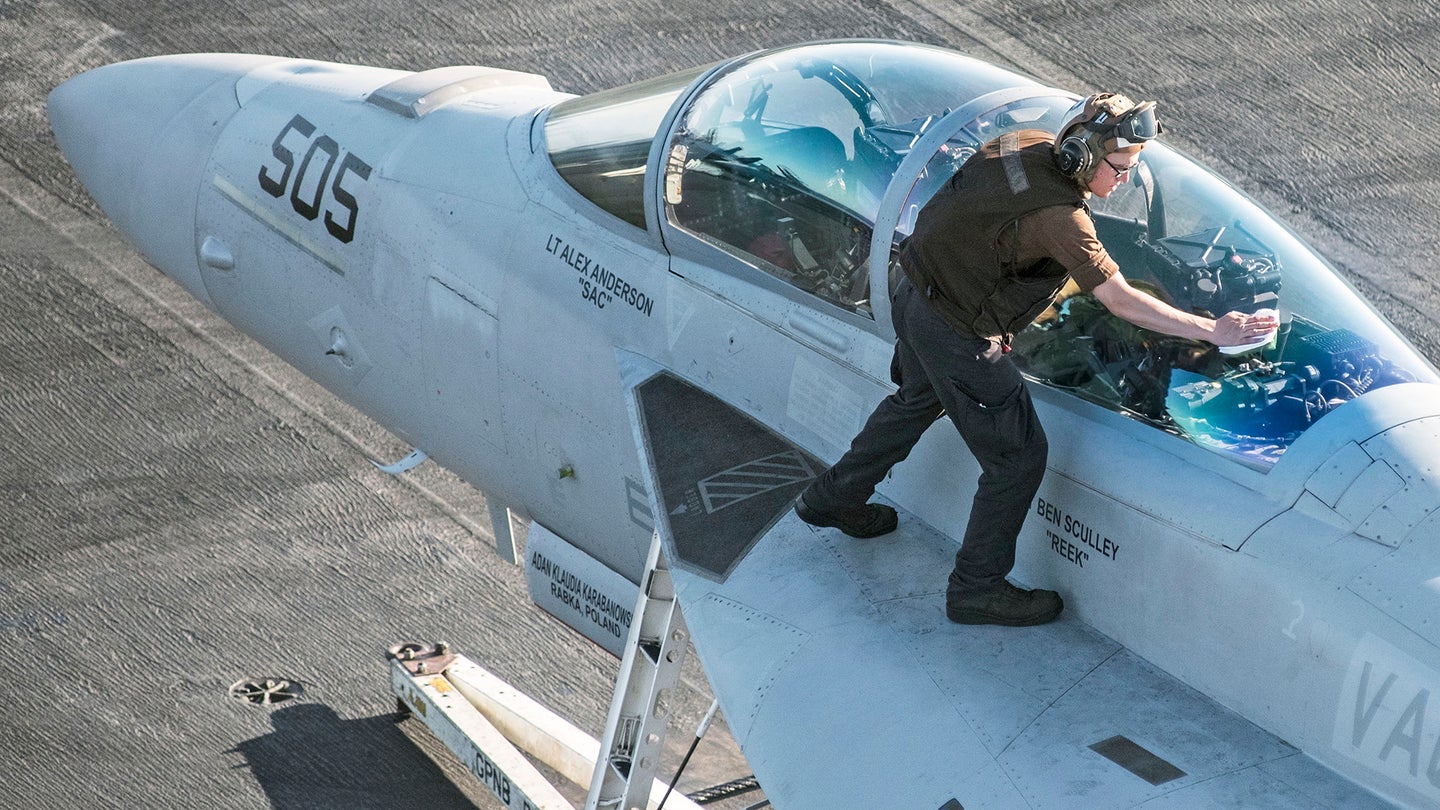 On Friday a pair of EA-18G Growlers belonging to VAQ-132 “Scorpions” flew down to Portland International Airport on a special mission—to say thank you to two 304th Rescue Squadron airmen for rushing to help their squadron mates right when they needed it most.

Details continue to emerge surrounding a bizarre and nearly deadly mishap that happened on a frigid morning at Naval Air Station Whidbey Island last December. The incident occurred as three Growlers were preparing for a mission, when upon startup one of the aircraft began to over-pressurize. The pilot and electronic warfare officer, trapped inside the jet’s clear canopy, were subject to some of the worst conditions a human can survive. The pressure built so quickly and violently that the jet's plexiglass canopy exploded, sending shards flying.

VAQ-132’s Commander Crawford gave a simple yet telling description of just how bad the effects of the incident were on the crew, telling a KGW reporter that “The scene was unlike anything I’ve ever witnessed. Some of the stuff...yeah...a little horrific.”

As emergency crews reacted to the incident, two pararescuemen—Staff Sergeant John Mellancamp and Staff Sergeant Ryan Penne—both from Portland’s elite 304th Rescue Squadron—were on the base and quickly put their unique set of skills to work to save the Growler crew’s lives.

Pararescuemen, known more popularly as “PJs,” are masters at recovering personnel deep inside enemy territory and providing emergency lifesaving care in the most inhospitable of environments, namely in combat. Gunshot wounds, traumatic brain injuries, losses of limbs, concussive trauma, severe burns and many other horrors of the battlefield are what they specialize in treating on the fly. They generally act as well-armed conveyors of life that do anything possible to keep their patients living until they can make it to a surgical center, hopefully within the “golden hour” where their chances of survival are highest. In the last decade and a half of perpetual warfare, PJs have exercised their skill set tirelessly, being some of the most valued assets on the modern battlefield.

As you can probably tell by the description above, they were the right people there at the right time to help the stricken Growler crew.

Once the aircrew were in the ambulance, the men knew their condition was critical. One had a traumatic injury to the head and the other had major damage to their lungs and was suffocating.

“As soon as I got in the ambulance with John, we knew this was extremely serious… When someone is having pressure in their chest you decompress it by putting a needle through the chest to release air so the lung can re-inflate.” said Staff Sergeant Mellencamp. The men went to work quickly along with other first responders, and once on the helicopter inbound to Seattle’s Harborview Medical Center they continued the chestal decompression procedure over and over again, keeping their patient alive, barely. Due to their actions and those of everyone involved that day, the Growler crew lived. One was just released from the hospital while the other will hopefully be released in the coming weeks.

In a choking tribute to the two PJs, Crawford stated that “Not only did you do your job in an exemplary manner that day, but you saved their lives. You touched more people’s lives than you know. I know for a fact that having Ryan and John there that day was definitely part of that chain that enabled my buddy to be discharged from the hospital yesterday.” The Scorpions CO handed the two men engraved bottles of scotch as a thank you from his squadron.

As for what caused such a heinous incident that resulted in a three-day long temporary stand-down of the entire Growler and Super Hornet communities, that remains under investigation, but at least one possible culprit has been identified. The cold weather combined with the spraying down of the aircraft before the mission has been identified by engineers as possibly having at least a partial hand in the overpressurization and the explosion of the canopy that followed. Mitigation measures have since been put into place so that these combined factors won’t present themselves again, and thus invite another mishap. New procedures have also been initiated for ground crews so that they can quickly identify and correct the issue if it occurs again.

It is also reported that the aircrew were troubleshooting environmental control system issues at the time the event occurred, which is unsurprising considering the outcome, and some sources have mentioned a valve system that is meant to relieve pressure under such circumstances had failed, although this is not official at this time.

The Hornet fleet, Growler included, has been plagued with issues surrounding its environmental systems. The Super Hornet’s issues are supposedly related to its onboard oxygen generation system (OBOGS) that supplies air to the aircraft’s crew. The legacy Hornet’s issues, which have been less severe, are thought to be due to the jet’s cabin pressure system as it does not have an OBOGS and uses liquid oxygen instead.

Between May 2010 and October 2015 there had been 297 documented physiological incidents of all types on Hornets, but most have to do with hypoxia (the lack of oxygen to the brain and its debilitating effects) or a total and sudden loss of airflow to the aircrew. None of the incidents involved a death or a crash of any sort, but still the problem is well known within the Hornet community. Although the Navy has been trying to fix the problems for years, and has put all types of measures in place to lessen its effects, its direct cause, or causes, remains a mystery. A report on the issue is due from the Navy on December 1st on this year.

At this time there is no known evidence that ties the incident at Whidbey Island last month to past Hornet and Super Hornet’s environmental control system woes. Additionally, no similar occurrences have been noted in over 15 years of operational flying of Super Hornets and Growlers, and over 35 years of legacy Hornet operations. Still, even if there was a direct tie, it is very doubtful the Navy could keep the jets from flying as a solution was figured out they make up the entirety of the service's tactical fighter capabilities. Even the prolonged grounding of just the Super Hornet and Growler communities would be catosphic as far as the Navy's combat punch is concerned.