Barack Obama’s Last Flight As President Aboard Air Force One

Saying goodbye to the White House is tough, but doing the same to Air Force One is likely much harder.

Among the best perks of being the leader of the free world are having the Presidential Motorcade, Marine One, and Air Force One at your disposal. Going from flying commercial to traveling in a 4,000 square foot flying White House that is as much an icon as it is a mode of transportation—one that is all dedicated to you—is an abrupt change of lifestyle few have experienced. In reality, Air Force One is any USAF aircraft POTUS is flying on, but the vast majority of the time that aircraft is one of two identical, highly modified 747-200s—designated VC-25As by the Air Force. The President also flies on USAF C-32As—modified Boeing 757s—which are often used by the Vice President and thus referred to loosely as Air Force Two. Regardless, with his last trip aboard the jet—a roundtrip from Washington DC to Chicago for his farewell address—the President has spent a whopping 2,799 hours and six minutes flying aboard an aircraft with the vaunted Air Force One callsign.

Those flight hours, equal up to just over 116 days, were made up of 445 missions and included destinations in 56 countries and 49 states. Some of those trips were routine, some were historic and some even ended comedic. Behind the scenes, vastly more hours were flown by the pair of VC-25As and cadre of C-32As for training, pre-positioning and repositioning flights, as well as acting as backups and spares while the President flew around the globe.

Like many of the Presidents before him, Obama has made numerous comments about his affinity for Air Force One, which started after his very first flight aboard back in early 2009. After which he stated with a big smile “It’s pretty nice!”

President Obama seen on his first flight aboard Air Force One as Commander In Chief back in early 2009:

Just last October, as Obama’s second term was drawing to a close, the President said the following when discussing new rules to protect airline flyers: "I’m going to be honest with you—one of the best parts of being president is having your own plane. And I’m going to miss it a lot... Because up until I ran for this office, I was mostly flying coach. So I know what a pain the whole process can be – from searching for the best prices to that feeling you get when the baggage carousel stops and yours still hasn’t come out."

The Obama’s have one more opportunity to fly on a VC-25A, although it won’t be flying as Air Force One. Instead it will be using the Special Air Mission “SAM” callsign that the aircraft of the 89th Airlift Wing, based out of Andrews AFB, use when flying around without POTUS or VPOTUS onboard.

President Obama celebrating the 20th anniversary of the VC-25A with its crew:

Following the inauguration of Donald Trump as the 45th President of the United States, a VC-25A or C-32A is made available to the outgoing President to fly the ex-First Family home. In this case, seeing as the Obama’s are going to be living in Washington DC for the foreseeable future, they will probably take the jet on a family vacation, and return home on a civilian registered aircraft. If the Obama’s are in the sky as President-elect Trump is sworn in, the jet’s pilots will actually request a callsign change in flight.

Unlike the Obamas, the incoming President has a long history of owning airliners that have been converted into lavish VIP transports, as well as personal helicopters. He also has strong feelings about the replacement program for the current pair of aging VC-25As. With this in mind, it will be interesting to see how Donald Trump perceives his access to Air Force One. In some ways it's a step down, luxury-wise, compared to his own personal 757—but no aircraft is as instantly recognizable or a diplomatically impressive as a Blue, White and Gold Air Force One. 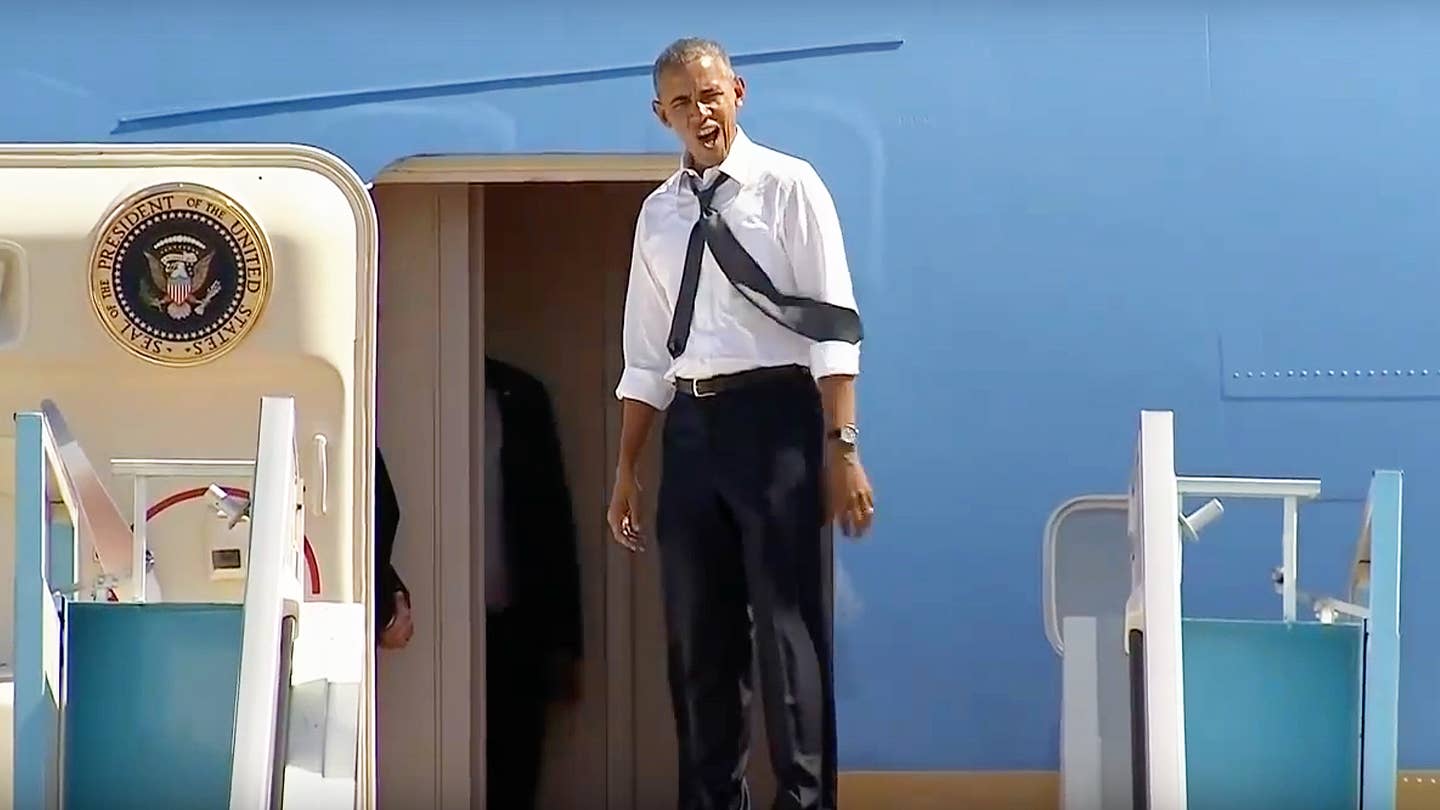 President Obama Wants Bill Clinton To Stop Lollygagging And Get His Butt On Air Force One!

Sometimes you just want to get the hell on the road, or in the air as it may be.