It looks very "Battle of Hoth" covered in snow doesn't it? 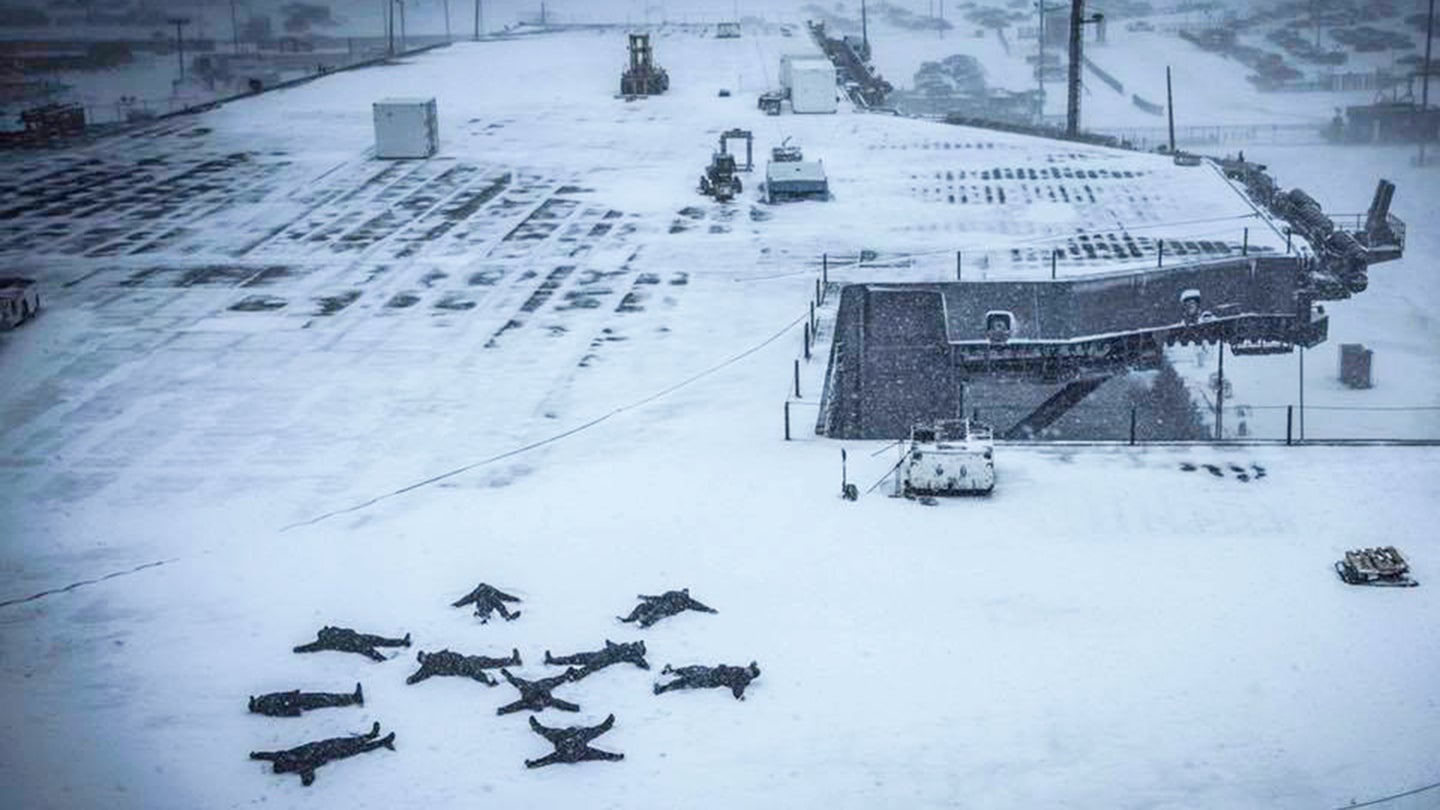 It’s not everyday you see the world’s largest and most complex weapons of war looking like they were docked at the North Pole. This weekend a harsh winter storm swept across much of the US, and Naval Station Norfolk was not left out. The Nimitz class nuclear-powered supercarrier USS Dwight D. Eisenhower (CVN-69), and its pier-mate, the USS George H.W. Bush (CVN-77), both got a nice coating of powder during the winter weather.

The creative public affairs folks aboard the “Ike” took advantage of the situation and snapped some shots of their ship awash in white. They even caught a group of sailors making snow angels on her flight deck—quite the magical moment indeed.

It’s not like America's carriers don’t ever venture into frigid climates, heck some of them are based in Washington State, which also gets hit with snow from time to time. Sailing through snow and sub-freezing temps just goes along with traversing the high seas, but seeing as ships can move around the worst of the weather in front of them—at least in many cases—large accumulations of snow on a supercarrier's deck isn't photographed all that regularly.

The picture below—passed around quite a bit over the years—is one of the few depicting a modern super carrier executing air operations with snow covering its flight deck. Maybe Russia is onto something with their novel jet engine carrier deck blower system—at least for these types of conditions.

In the past, especially before modern weather and navigation aids were available to mariners, carriers ran into and operated in some pretty frosty conditions. This was especially true during the Korean War. Winters off the Korean peninsula's coastline could be especially frigid and stormy, blanketing carriers and their aircraft with snow.

These fun photos come at a time when the US is experiencing a highly publicized “carrier gap” in which no US carriers were deployed anywhere in the world for the first week of the new year. This has not happened since World War II.

It sounds a little more sudden and severe an issue than it really is. High operational tempos and the retirement of the USS Enterprise (CVN-65) long before the troubled USS Gerald R. Ford (CVN-78) would be ready for operations was expected to cause availability problems and outright disruptions in the usually constant US supercarrier presence around the globe. The fact that the USS George H.W. Bush (CVN-77)—the Navy’s newest operational carrier—has blown through its intended six month maintenance window, taking 13 months instead, only aggravated the situation.

The Navy has said that the Bush’s prolonged maintenance period was due to the extension of its last deployment causing more wear and tear on the relatively new vessel than originally planned—though there has also been some finger-pointing at the shipyard. If it had kept to its original schedule, the Regan would have been available to relieve the Ike and the carrier gap would have never occurred.

The Navy announced last week that the USS Carl Vinson (CVN-70) would leave San Diego to execute joint training exercises in Asia, ending the short vacancy of America’s supercarriers from the world’s oceans. But still, there will not be a carrier in the middle east for months to come, and that is infuriating some in Washington. The reality is that, although a carrier strike group’s presence in the region may have a psychological impact on potential foes, there are dozens of major airfields available to the US throughout the region to launch strikes from. As such, the loss of carrier is not a big tactical issue, it may just set a poor strategic precedent in some people’s minds.

The carrier gap problem is not going to get better soon, considering the Ford’s operational date remains a total question mark. With this in mind, now would be a perfect time for the Navy to step away from its extremely rigid all-supercarrier force structure strategy, but that’s an entirely different story altogether.