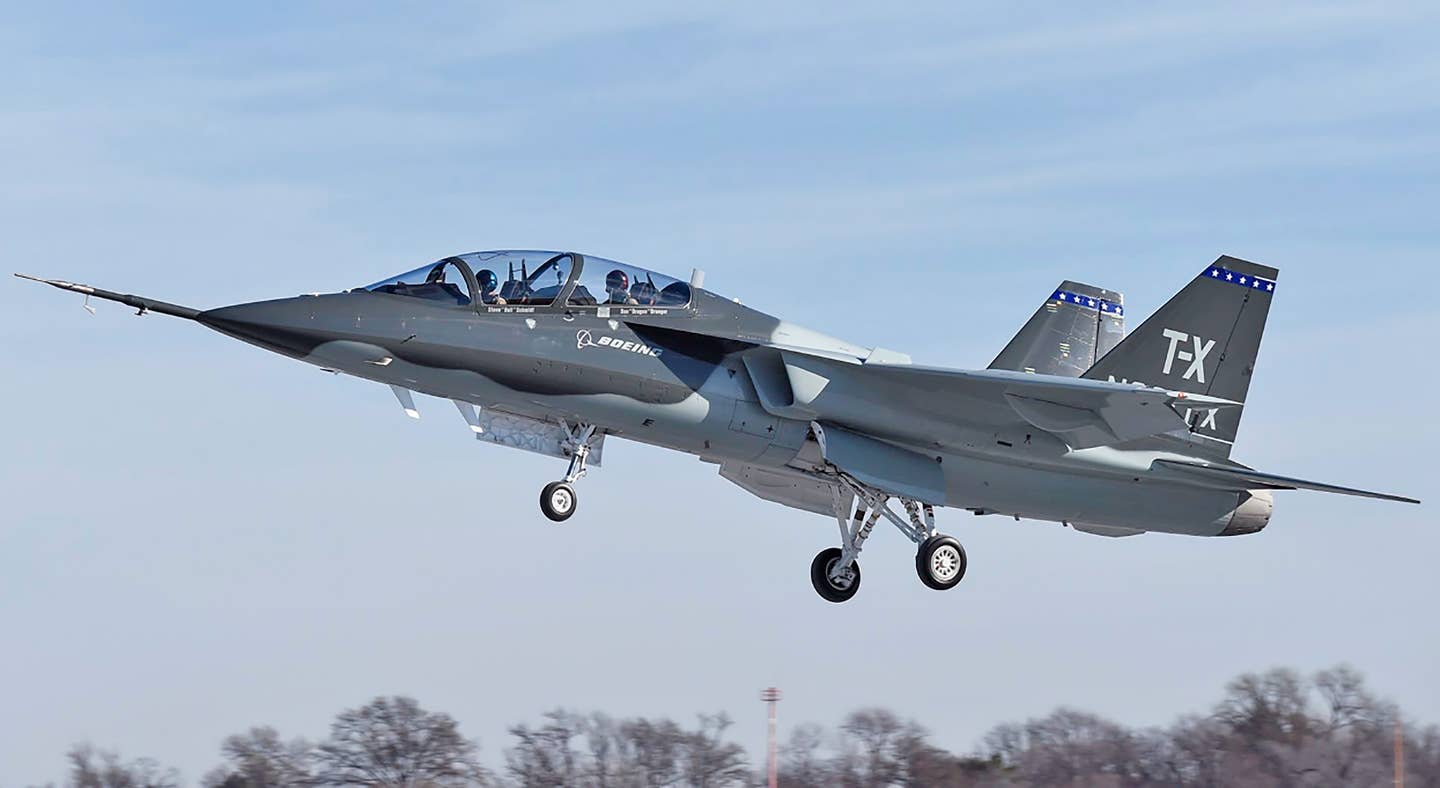 Just three months after theBoeing-Saab consortium unveiled their candidate for the USAF’s T-X program, the clean-sheet design has taken to the skies for the first time. The sleek GE-F404 powered jet took to the skies over St. Louis on a 55 minute test flight with veteran test pilot Steve 'Bull' Schmidt at its controls. Boeing says the flight went as planned and “validated key aspects of the single-engine jet and demonstrated the performance of the low-risk design.”

This inaugural sortie came just days after it was discovered that Northrop Grumman had quietly been flying their Model 400 T-X contender over Mojave Spaceport. The type still has not been officially rolled out, appearing only in a few spotter images snapped late last summer.

It also comes just days afterSierra Nevada Corporation and Turkish Aerospace Industries announced that they would be throwing their collective hat into the T-X ring by offering a fuel efficient and likely low-cost clean sheet design of their own. The aircraft will feature fly-by-wire controls and use two commercial FJ44 turbofan engines often found on small business jets instead of a more powerful fighter jet engine.The rendering of the aircraft—supposedly already being built—looks like a lower performance, subsonic version of Boeing-Saab’s T-X design.

Although we do not have the official T-X RFP from the USAF yet, it was thought that high-performance, maneuverability and expandability would be weighted heavily in the competition. This makes Sierra Nevada and TAI’s concept puzzling at first, but the consortium—which calls itself Freedom Aircraft Ventures—says they will still be able to accomplish the minimum G and AoA requirements by creating a lighter design. Not only that, but the aircraft will supposedly use about half the fuel for normal flights and cost significantly less, both in purchase price and sustainment costs.

If the USAF decides to rationalize its T-X purchase against other pressing procurement requirements, Freedom Aircraft could be onto something. This is especially relevant as so much of future tactical pilot training will be dependent on what goes on within the brains of the aircraft, not on its raw performance. Additionally, future fighters are likely to be less maneuverable than today's jets.

Investing heavily into hundreds of trainers slated to serve for many decades is probably a stupid move, as unmanned systems will (or at least should) increasingly erode tactical pilot training requirements in the decades to come. This is especially valid considering the unsustainable force structure that the USAFcurrently is planning toward, and the lack of pilots that the force is already dealing with.

Once the T-X RFP is out it will take about a year to decide the winner of the contract. From there, development will begin in 2018, with low-rate production starting in 2022. Initial operating capability is slated for 2024. With five contenders now vying for a prize that could determine the future of tactical aircraft manufacturing in America, it is going to be one serious furball of a dogfight.