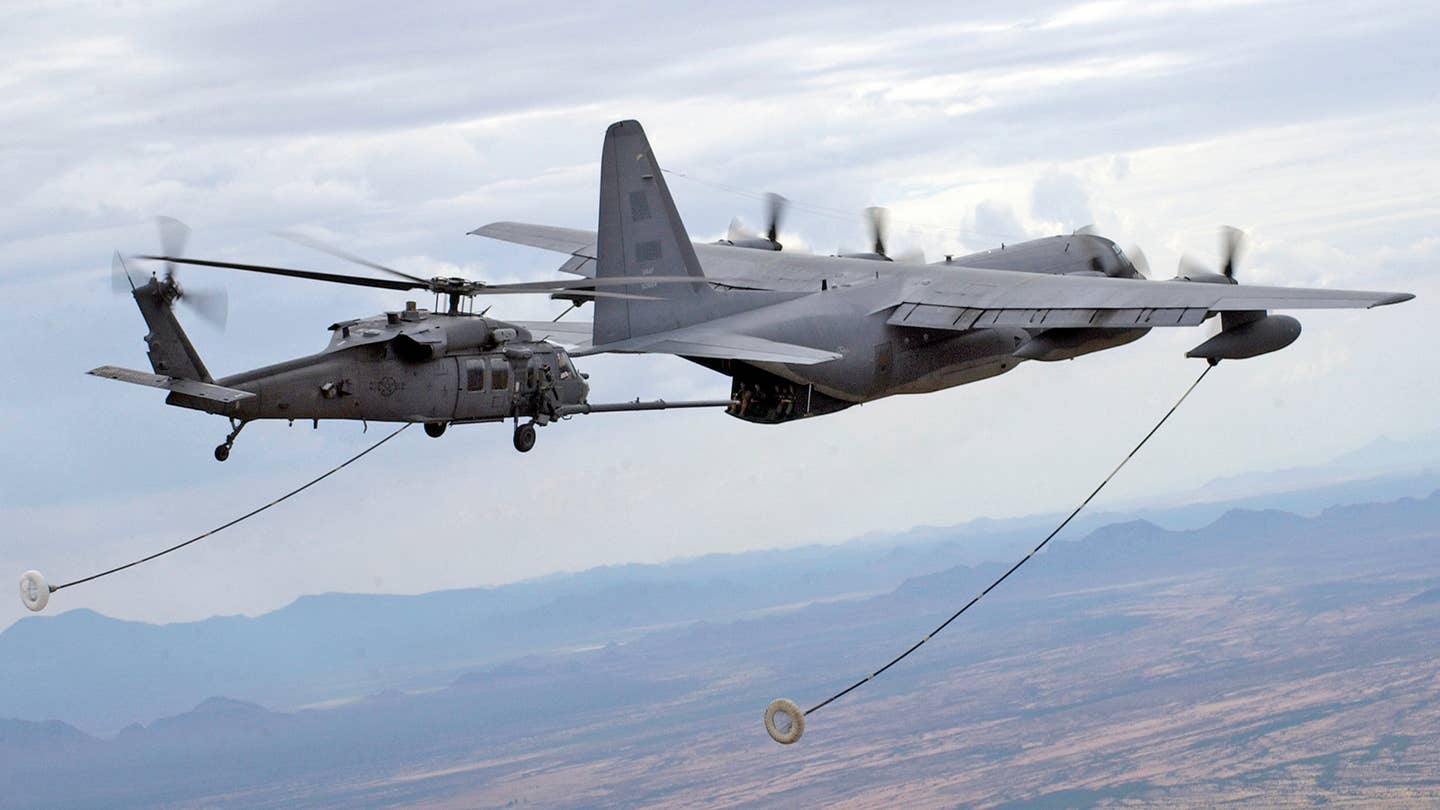 New Yorkers saw an interesting visitor in the tightly controlled skies over Manhattan on Tuesday. Contacts of mine who work in the area, many of which are journos, started tweeting about a C-130 making rounds over Midtown at fairly low level. I quickly ID’d the aircraft and where it came—an HC-130 from the 106th Rescue Wing—from by the pictures I was seeing and by its telltale call sign identifier, “King 22.”

The King callsign is used pretty much exclusively by the combat search and rescue (CSAR) Hercules community. The moniker has deep roots dating back to Vietnam, and aligns with the name of CSAR Hercules crews’ mounts—the HC-130P/N Combat King or the newer HC-130J Combat King II.

These aircraft are capable of a host of missions—long-range transport into austere fields, making airdrops, acting as refueling points on the ground, aerial tanking, and serving as medevac and disaster relief platforms, just to name a few. Yet their core mission is low-level, nighttime interdictions into enemy territory to support combat search and rescue operations. Often times, this means refueling HH-60G Pave Hawks helicopters filled with PJs along the way.

The HC-130, with its special communications and surveillance suite THAT includes a FLIR and satellite links, can also act as an airborne command post and provide communications relay and overwatch functions for search and rescue and special operations missions.

The Combat Kings, and the Pave Hawks that often work alongside them as a team, are all about getting pararescuemen—often heavily armed—onto the scene, even under high-threat combat conditions, and plucking downed pilots and other key individuals out of harm's way before the enemy can snatch them. They can also provide life-saving medical treatment to their “customers” while in the air and on the ground. Think of it as the world’s ultimate emergency evacuation service.

And this is where we come back to that strange display over Midtown on Tuesday. First off, the airspace over New York has been tightly controlled following 9/11. Larger aircraft buzzing the skies over the city, even on official business, is something that is normally avoided. (Case in point: the public outcry that followed a photo shoot of Air Force One flying over the city in 2009.)

There is even a ban on helicopters landing on helipads atop buildings, leaving the city with only the heliports at Wall Street, East 30th Street, and West 30th Street. The visual flight corridors that do exist over the Hudson have become more restrictive in recent years, There is even a weekend ban on helicopter operations in and out of the city—one that Mayor Bloomberg got caught breaking.

Airplanes can fly over Manhattan, but at higher altitudes (above 7,000 feet)—or in some cases, 1,000 feet above the tallest object beneath the aircraft, but only with air traffic control permission and with flight following. But even this has been restricted recently, with the FAA imposing a 3,000-foot-high, two-mile wide, temporary flight restriction (TFR) over and around Trump Tower. This locks down the low-altitude airspace over the heart of Manhattan above the Hudson River on both sides on the city.

So with all this in mind, it’s not as if C-130s and Pave Hawk helicopters just routinely fly low-level patterns over this most sensitive of airspace on a regular basis, and especially not on a random Tuesday afternoon. What’s more, they don’t do this specifically over the airspace that has been closed following Trump being elected President.

The track of the HC-130’s flightpath over the city is telling to say the least. in that it stays perfectly within this locked-down portion of airspace—and is almost centered directly on Trump Tower.

So what were these aircraft doing? Well we can’t be certain, but we can take an educated guess. They belong to the 106th Rescue Wing based out of the Francis S. Gabreski Air National Guard Base, which is co-located at Westhampton Municipal Airport, just 65 miles east of Manhattan. This means they would be one of the first assets on the scene during an emergency or disaster in New York. And considering their mission, there are few better outfits around to have swoop in and extract key people from America’s most dense concrete jungle should the need arise.

For better or worse, Trump Tower will remain not just a target but a seat of power for the First Family for years to come. Securing the building, at least as much as it can be secured, is costing the city massive amounts of money each day. In the event President Trump and his family need to be evacuated from Manhattan, the PJs and the 106th Rescue Wing have almost certainly been tapped to be the go-to ones to assist the Secret Service in making that happen.

As such, they need to become intimately familiar with challenges presented by the pinpointed landing zones and airspace directly over the center of city. They also need to train at working together as a team in this environment, with the HC-130 working as overwatch and command and control, and the HH-60Gs swooping in to grab their targets.

So what New Yorkers likely saw on Tuesday was just that: unique training to prepare the 106th’s aviators for a very demanding and high-priority task. And this type of mission is nothing new for the military. Around Washington D.C., a massive fleet of military helicopters from multiple units all train to extract key power players, and in some cases their families, from the Capitol in the event of an emergency. (You can read all about these units, their gear, and their mission in this past feature of mine.) Even Washington D.C., with its extremely tight airspace restrictions, opens up its skies to this training occasionally.

When Donald Trump became the 45th president-elect of the United States, he and his family became a monumental security risk. The fact that they live and work in the heart of midtown Manhattan, with their residence and workplace being a prominent building (with their name emblazoned on it, no less) vastly complicates the situation. There is no doubt that the highly-trained Secret Service, the U.S. military, and the NYPD, along with other agencies, have began working together to mitigate this risk. These aircraft were just another piece of that intricate and expanding puzzle.