Pilot Killed In Yet Another Marine F/A-18 Hornet Crash

The USMC has been shedding Hornets from its tired fleet at an alarming rate. 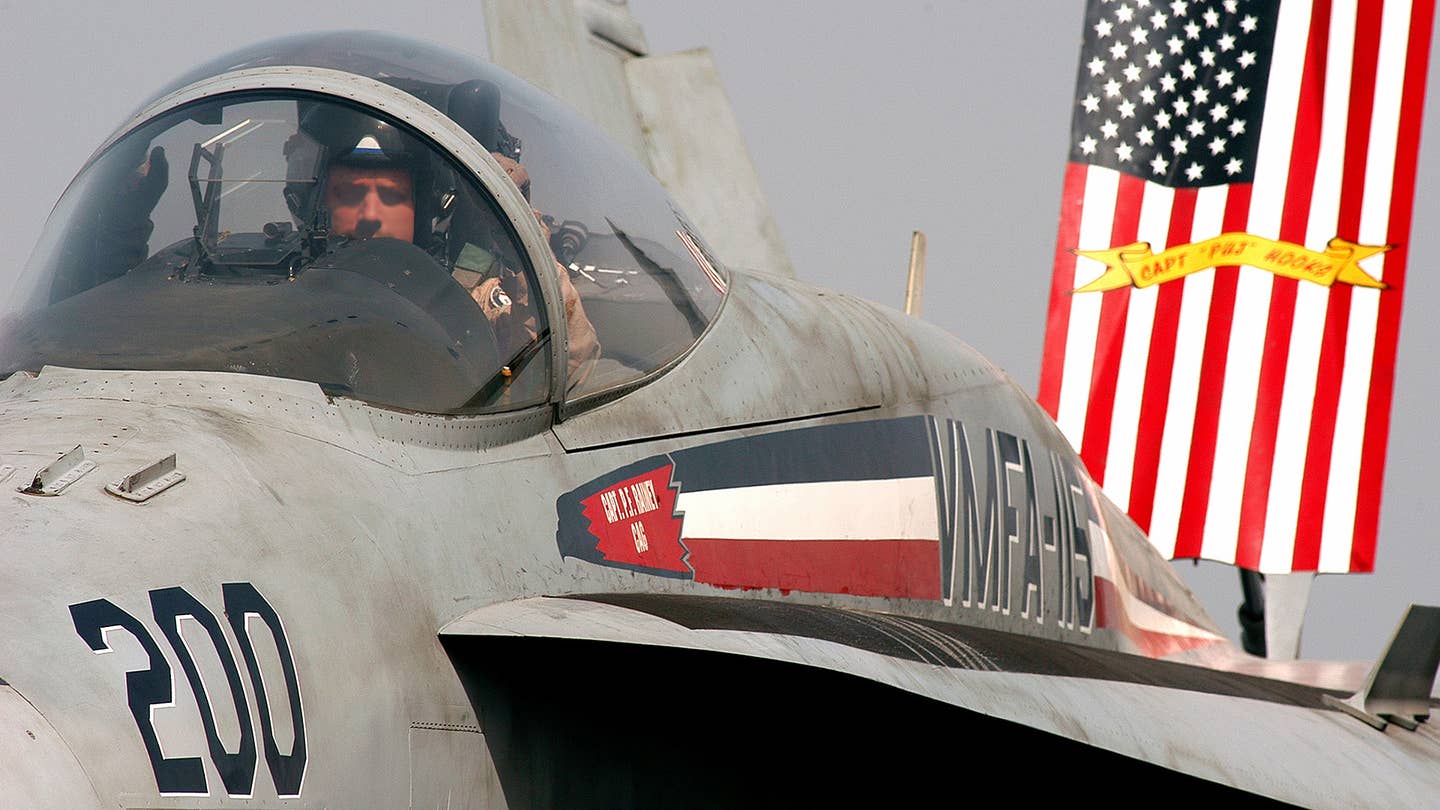 A Marine Hornet forward deployed to Japan crashed last evening a 6:40pm local time while on a routine training mission. The wingman of the stricken Hornet pilot stayed overhead the crash site until they had to return to base due to a low fuel state.  A search was quickly launched for the pilot—who was thought to have ejected—in an area roughly 120 miles southeast of MCAS Iwakuni, Japan. Both US and Japanese assets were said to be taking part in the rescue mission. Now, according to Military.com, that search has ended, with the body of the pilot being found by a Japanese vessel. The pilot has been identified as 32 year old Capt. Jake Frederick. The F/A-18C Hornet supposedly belonged to VMFA-115 Silver Eagles.

The Marine Corps has been shedding Hornets at an alarming rate, and with those losses some of the USMC’s best aviators have lost their lives. In just the last six months, the USMC has lost six F/A-18s. Two crashed in separate incidents at MCCS 29 Palms, one crashed while deployed to NAS Fallon, two collided while flying out of MCAS Miramar. In addition, the Blue Angels lost a Legacy Hornet last June, and in September of 2015 a Miramar-based Hornet crashed while flying home from Middle East. International Hornet users have also lost Legacy F/A-18s as of late, with a deadly Canadian Hornet crash occurring just days ago, and a Swiss Hornet crashing late last August.

Although every crash is different, and we don't know what transpired last evening over the waters near Japan, the USMC has been negligent in keeping their crews trained and their aircraft in flyable condition—two key components that go hand-in-hand. This is no secret, and the service is now attempting to deal with the problem through recapitalization efforts, including pulling 30 worn-out Hornets from the boneyard, regenerating and upgrading them, and returning them to the fleet—all at great cost. Similar efforts are occurring with other run-down Marine aviation communities.

The loss of two CH-53E Super Stallions off the coast of Hawaii last winter is the most glaring example of how bad things have become. The after-action findings are so damning and so absurdly sad that it will make you outright enraged that things were allowed to get so bad—especially considering the USMC has been investing many billions into new high-end capabilities while the force it already had rapidly degraded.

Even with 30 reworked Hornets coming online, these constant losses will only broaden the fighter gap being experienced by NAVAIR. The Navy has continued to buy more Super Hornets, which are readily available from Boeing, to help bridge this gap that has been exacerbated by massive delays in the F-35 program and a high operations tempo. The USMC on the other hand deferred purchasing the Super Hornet, instead betting everything on the F-35. This decision has dogged the service as there is no tactical fighter in its inventory still in production to purchase as a stopgap measure until the F-35B/C has finally matured.

With a new administration arriving in Washington on January 20th, there is an opportunity for change. Trump and the Republican dominated congress have said that they aim to immediately quell the specter of sequester. This will help, but more money alone is not the answer.

Systemic change in the way the USMC prioritizes its funds will be needed in order to keep history from repeating itself. With ex-Marine General Mattis likely taking the reigns of the Pentagon, a leader that seems to place core capabilities at least on par with whiz-bang new technology, hopefully Marine Aviation will get back on its feet in the not so distant future.

Will will keep this page updated throughout the day as more information on the crash comes available.

One of the USMC’s most storied fighter squadrons has had an incredibly tragic year.