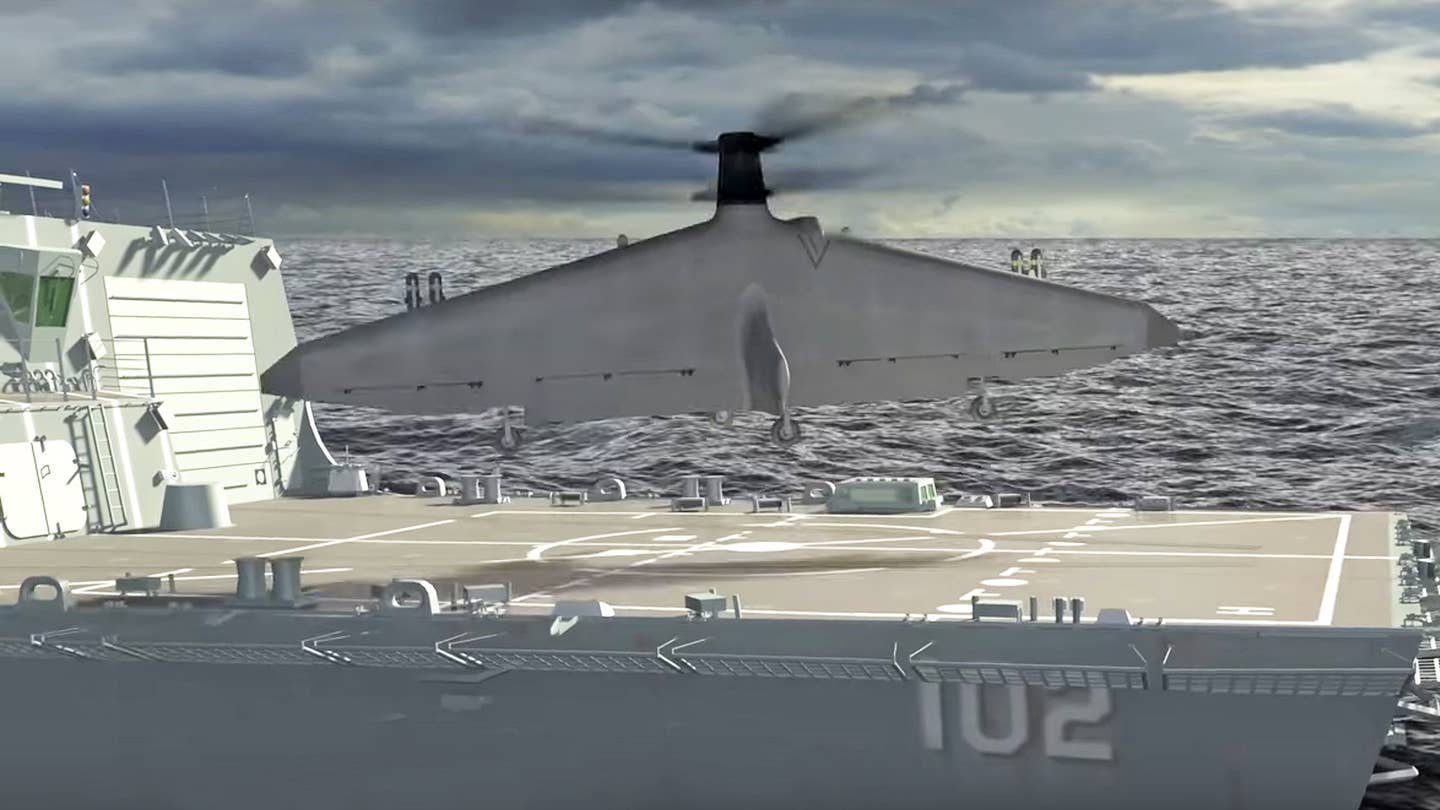 The Defense Advanced Research Projects Agency and the Office of Naval Research are literally doubling down on the Tactically Exploited Reconnaissance Node concept—better known as Tern—ordering two full-scale technology demonstrators instead of just one.

The news came as multiple design reviews surrounding critical Tern components were successful, allowing the Northrop Grumman and Aerovironment team that was selected to build Tern to continue to move forward with program. On top of all this positive news, Northrop Grumman has released a pretty sweet new conceptual video showing what Tern will look like in action.

Tern has the potential to totally change the way US Navy’s surface combatants operate and fight. Providing a fixed-wing, medium-altitude, medium-endurance (MAME) unmanned capability to small-deck warships that have historically been relegated to operate shorter ranged, slower and lower flying helicopters would be a game changer. The project aims to give everything from a Littoral Combat Ship to a “gator navy” amphibious assault ship an unmanned aircraft capability analogous to something between the USAF’s MQ-1 Predator and a MQ-9 Reaper. But unlike those unmanned systems, Tern will require no runway at all.

Fielding Tern operationally would give these ships the ability to survey massive amounts of the earth’s surface and sky far from the ship’s location—up to about 900 miles away according to the Pentagon—using many types of sensors. These could include radars, electronic intelligence collecting systems or exotic electro-optical payloads, as well as communications relay and data fusion equipment. But surveillance and communications support is not the aircraft’s only mission, it will also have teeth.

Tern is being created to carry around a 600 pound payload, that can include missiles and guided bombs. It could use this capability to not only attack ships at sea, but also to support special operations or Marines on the ground. In fact, a single Tern should eventually be able to provide armed overwatch and communications relay duties at once.

Make sure to read all about Tern, its potential applications, including those beyond the naval warfare space, and about its throw-back design in this past feature.

As the Tern program enters its third phase the prototypes are under construction. Once finished they'll enter a graduated testing program. If initially successful, Tern could go to sea for testing on a platform the same size as those found on the flight deck of destroyers, cruisers and Littoral Combat Ships. A significant part of the flight testing side of the program will be proving that the craft can land of the pitching and rolling decks during rough seas, something that tests the skills of the best helicopter pilots around. Not only that, but the big “tail sitting” flying wing craft will also have to prove that it can be easily wheeled around a flight deck and stored in a typical destroyer’s hangar bay.

Who knows, if the Tern demonstrators are as successful as the Navy’s other recent unmanned technology demonstrator program—the X-47B UCAVs—they could go on to pave the way for an entirely new class of air combat vehicle. And that's precisely what DARPA and ONR seems to have in mind.