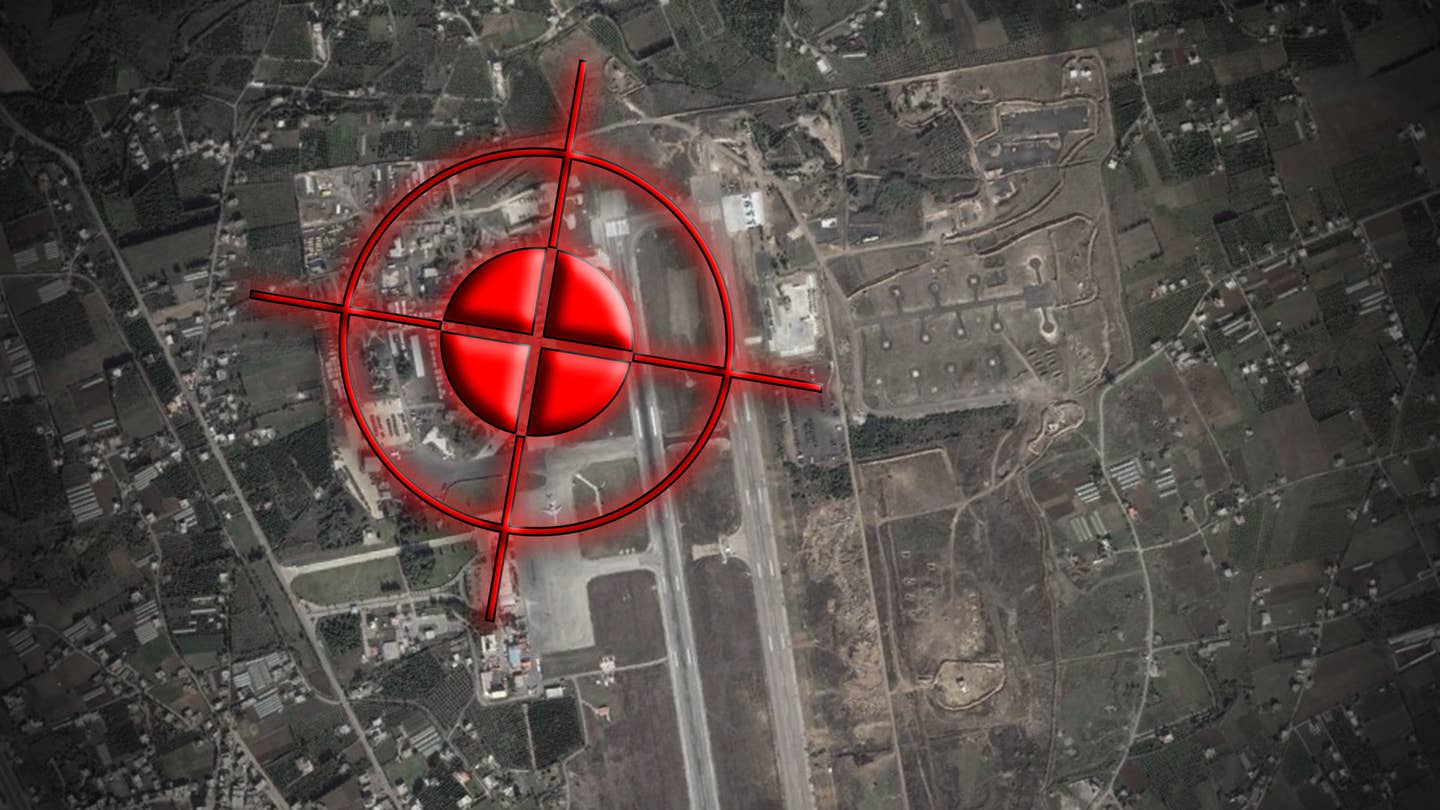 According to new satellite imagery, Admiral Kuznetsov, the Russian aircraft carrier sailing off the coast of Syria, has dispatched nearly its entire fighter jet inventory (eight Su-33s and one MiG-29KR) to Moscow-controlled Hmeimim Air Base in Syria. The move comes after the loss of a new MiG-29KR — one of Russia’s most advanced fighter aircraft — as it was waiting to recover aboard the carrier following a mission over Syrian territory. The Admiral Kuznetsov had just been on station for just a few days before the loss occurred.

The Admiral Kuznetstov’s fighters could be using the base as a forward-arming and refueling point (FARP) to increase their bombing sortie rates. By utilizing the base’s runway, these aircraft can carry far more weaponry and fuel on each sortie than they can when using the Kuznetsov’s ski jump. Despite that advantage, sending most of the ship’s fast-jet inventory to a Syrian airbase as a temporary stop-off point before returning to the ship seems highly unlikely. Especially since large strike packages have not really been used by Russia for the fairly rudimentary duties their fast jets have been called upon to execute during the conflict.

Safely operating fixed-wing aircraft from a carrier isn't easy or cheap — and doing it in a sustained manner over multiple months presents a whole other set of challenges, risks and costs. The Kuznetsov’s presence in the Eastern Mediterranean has never held much tactical importance when it came to the conflict in Syria. Russia has bases in-country, and carrier operations remain a transient military capability for the Kremlin, so sending a carrier to the region makes little sense. What the deployment lacks in tactical relevance it makes up for (at least superficially) in larger strategic significance — especially when it comes to “optics” surrounding such a deployment; both for international and domestic consumption.

By dispatching the Kuznetsov — along with the largest flotilla Russia has assembled since the end of the Cold War to the waters off Syria — and executing highly publicized operations before sending naval fighters ashore, Russia gets a big propaganda win leveraging the most out of the fighters it has in the region, even if carrier operations are limited. By continuing to release snippets of video showing different types of operations aboard the carrier, the public in Russia and abroad will assume that the ship continues participating in large-scale air strikes — and that it's effective at its intended mission — even though the truth may tell otherwise. Hence this video of a KA-52K flying around the carrier that has just popped-up online:

It is possible that a bit of both scenarios are occurring, with limited operations continuing on the Kuznetsov, but with the vast majority of the air wing’s strikes emanating from Russia’s master jet base in Syria. Then again, this near-total evacuation of combat punch from the Kuznetsov could have a different and more momentary purpose altogether. We will just have to wait for more satellite imagery to find out. Either way, it's another reminder of how things rarely are as they appear when it comes to Russian military operations.

Meanwhile, as expected, the campaign to break Aleppo has hit new levels of depravity, with bombs striking eastern Aleppo at a rate never seen before. Now, two large districts in northeastern part of the city has been seized from rebel control via a ground assault by Assad’s Iranian, Russian and Shiite militia-backed forces. The thrust into the area looks to be a dividing maneuver, used in an attempt to cut the rebel’s communications, supply lines and combat punch in half.

Roughly one third of the rebel-held territory in Aleppo has been seized by Assad’s forces and their allies since this latest offensive kicked off. In the process the humanitarian situation has turned from bleak to downright doomed. Some estimates state that at least 250,000 innocent people remain trapped in the metropolis, nearly half of whom are children. Food, water and medical supplies are becoming dwindling, and medical facilities are no longer operating anywhere in the city.

Russia denies that its aircraft are active over Aleppo since resuming air strikes nearly two weeks ago. Regardless, US officials are not decoupling Russia from responsibility for the horrors occurring in the besieged city. The US Ambassador to the UN, Samantha Power, stated the following just last week:

Power went on to chide Russia for not condemning any of these attacks, and made it clear that top officials will be held accountable in a similar manner to war criminals in the past, stating:

"Attacks on civilians fuel terrorism; they don’t defeat terrorism. The perpetrators must also know that, like their ignominious predecessors through history, they will face judgment for their crimes."

Russian media has continuously painted a very different picture of events in Aleppo and has constantly touted “humanitarian corridors” as a great success in keeping innocents out of the fighting and indiscriminate bombing. Yet other reports state that these corridors are widely untrusted and unreliable, with both sides being accused of firing on innocents trying to leave the city.

Last week's UN-backed humanitarian aid deal for Aleppo, supposedly agreed to by the rebels, seems to be in limbo waiting for a formal Syrian government and Russian response. Days after the plan had supposedly been put forward, Russian officials acted as if they had no solid information on it and were quick to go back to the same rhetoric concerning the ‘terrorists’ they and their Syrian allies are fighting. Russian Ministry of Defense spokesman Igor Konashenkov stated:

“The Russian Defense Ministry is ready to support any initiatives on delivering humanitarian aid to civilians in Syria not only from UN, but also from other international organizations and countries, regarding both eastern Aleppo and other parts of Syria… Thousands of tonnes of humanitarian aid from Russia were already delivered by the Russian Center on Reconciliation in Syria to the provinces of Aleppo, Hama, Homs, Damascus, Latakia, Palmyra, Deir ez-Zor and other cities… Talking about statements made by Mr Egeland (Special Advisor to the UN Special Envoy for Syria) on Aleppo, the Russian Defense Ministry does not have reliable information on alleged agreement of the ‘armed opposition’ to delivery of humanitarian aid. There are no names, evidence or documents, apart from Mr Egeland’s words… If the ‘opposition’ in Aleppo agrees to humanitarian aid and evacuation of civilians, who has mined and shells all humanitarian corridors then? Who opens fire from mortars and self-made rocket launchers at residential areas of western Aleppo?... Do terrorists know about his (Egeland’s) agreements with ‘opposition forces’? Or are the ‘opposition forces’ terrorists themselves that kill Aleppo residents at night and hold talks with UN representative Egeland during the day?"

Supposedly going on quietly beneath all this rhetoric is a last-ditch effort by John Kerry’s State Department to come up with some sort of lasting ceasefire in Aleppo. This obviously entails a race against time in regards to the military situation on the ground in the war-torn city as well as in regards to changing political realities in the US. The Trump Administration is less than two months out from taking over America’s diplomatic reins, and massive changes in regards to America’s policy vis-a-vis Russia and Syria will come with it.

It is also important to note an incident that happened involving Turkish ground forces and Syrian aircraft last Thursday. Details remain sketchy, but the attack supposedly happened near the city of Al-Bab, located just 20 miles east of Aleppo and 18 miles from the Turkish-Syrian border. At around 3AM local time, bombs struck an area where Turkish special forces were located, killing three operatives and wounding ten more. Syria denied the airstrike, but Ankara seems to be sticking to its claim that Syrian aircraft were to blame, not ISIS artillery.

It was the first time Turkish forces have been attacked by Syrian government forces since Ankara dove deeper into the conflict with a ground offensive late last summer. The incident also occurred on the one year anniversary of Turkey shooting down a Russian Su-24 Fencer based in Syria that had very briefly entered Turkish airspace.

After many months of estrangement following the shoot-down, Russia and Turkey have become close once again. The coup attempt on Turkish President Erdogan largely catalyzed this change in diplomacy. Still, Turkish-Syrian relations remain very poor, with the Assad regime seeing Turkey’s backing of anti-Assad rebel forces as a move to overthrow the regime.

Turkish soldiers’ presence near Al Bab is part of what is becoming a race among multiple factions to see who can sack the city first. Turkish-backed rebels, Kurdish fighters and Assad’s forces are all advancing on the ISIS stronghold. These factions oppose one another and are already in a shooting war to at least some degree with at least one other player in the trio. With this in mind, it is unclear how these forces will interact with one another as they converge on the city, although even the thought of them holding off fighting among themselves until they can liberate the city is likely very wishful thinking.

All this prompts questions as to what happens if, or when ISIS is no longer a centralized threat within Syria’s borders. The likelihood of an even bloodier and more fractured mutation of the Syrian civil war looms bright, as this scenario becomes a tangible possibility. Forces that oppose Assad currently focused on defeating ISIS may well turn their internationally furnished weapons and training against the regime once ISIS no longer holds major territory in the country. Assad’s forces will likely do the same, re-tasking Shiite-militias and Russian-backed forces in an attempt to crush anyone who opposes the regime, without the distractions of ISIS or Aleppo to get in their way.

Iraq too could also quickly fall into its own civil war once ISIS is no longer a common threat within the country. Such a situation would result in unprecedented political and military turmoil ranging from the Mediterranean to the Persian Gulf. That both conflicts, Syria and Iraq, have more deeply invested international stakeholders than ever before makes them much more volatile — especially considering the great geopolitical shifts of the last few years. If both countries were to become embroiled in deep sectarian and politically-driven fighting, without a common enemy to justify the violence, a much larger potential for a wider globalized conflict would develop than what currently exists today.

It is impossible to deny that at this point all the building blocks for such a conflict are quickly falling into place. As such, it will take great diplomatic maneuvering to see that this does not come to pass. This will be a huge challenge for the new Trump administration to tackle as it settles into the White House in January.

Finally, the sad news hit late last week that for the first time an American soldier has died in Syria. 42 year old Senior Chief Petty Officer Scott Dayton, a highly decorated sailor, was reported to have been killed by an improvised explosive device in the town of Ayn Issa, Syria.

Dayton was assigned to an EOD team that is part of the 300-ish strong special operations contingent deployed to the region to train and assist factions fighting ISIS. Although injuries to soldiers operating in Syria have been downplayed by the powers that be in Washington, the Senior Chief’s death is a sobering reminder that America does indeed have “boots on the ground” in Syria, and those soldiers face big risks operating with such a light footprint in a very hostile and unpredictable place.