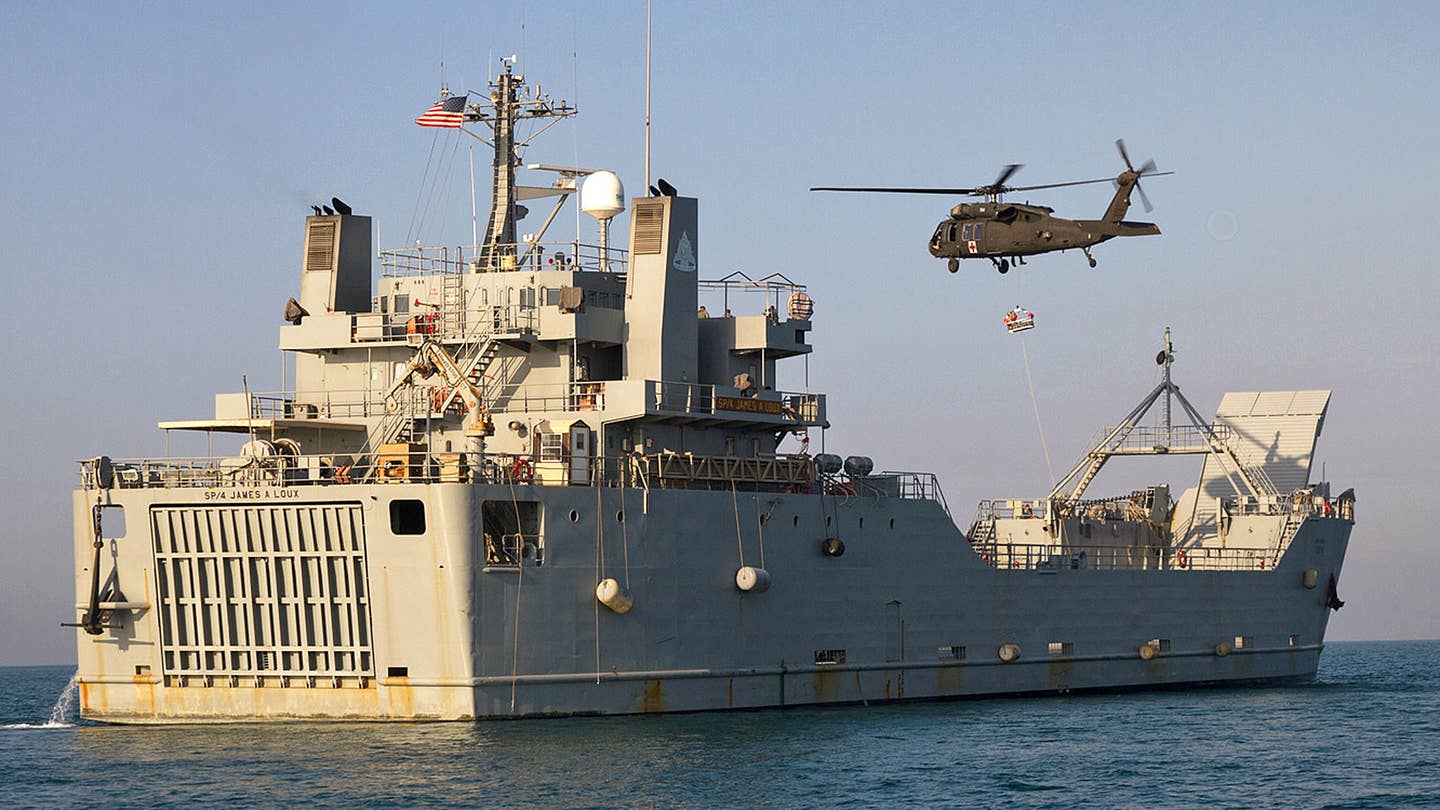 When you think of the US Army, large seagoing vessels don’t come to mind. Maybe they should; the service has its own expansive fleet of boats and ships, and the USAV SSGT Robert T. Kuroda and its sister ship the USAV Major General Robert Smalls are the biggest of them all.

While the Marines have their own specialized high-end armada of Navy ships, sometimes referred to as the “Gator Navy,” to support their amphibious operations, the Army has no such luxury. But what the Army does have is a far more understated beach landing and logistics naval force that relies on a simpler sea-bound logistics concept.

At the heart of this concept are the Army’s largest class of ships, the Logistic Support Vessels (LSVs) of the General Frank S. Besson class. Eight of these ships are in service with Army, six of which were built between 1987 and 1994. Following the retirement of theNewport class Landing Ship Tank (LST), they are now the largest of their kind within the Pentagon's inventory and are reminiscentof Russia's massive amphibious landing ships.

These first six ships are 273 feet long, 60 feet wide, and displace 4,200 tons. They were designed to convey cargo and vehicles, and can be loaded and unloaded by crane right onto their decks, or by ramps on the stern and on the bow of each vessel. The bow ramp in particular is designed for direct beach/shoreline access, with ships pulling right into the surf for loading and offloading.

These ships are capable of carrying any of the Army’s land vehicles, including the massive M1 Abrams main battle tank. In fact, it can haul up to 15 of the Abrams at a time. It can also carry a maximum of 82 double-stacked 20-foot long ISO containers, a big tugboat—even a Boeing C-17 fuselage.

The maximum load for the early Besson class is 2,000 short tons spread over the vessel’s 10,500 square-feet of deck area. It's an extraordinary accomplishment for a ship with a draft of just 13 feet. Drawing so little water helps for expeditionary operations when docks are not available.

In the early 2000s a subclass of the type was launched consisting of two ships, USAV SSGT Robert T. Kuroda (LSV-7) and its sister ship USAV Major General Robert Smalls (LSV-8). These are the largest ships in the Army’s inventory, with 42 feet added to the earlier General Frank S. Besson class design.

This increased length is largely due to a modification of the ship’s bow. Instead of having the flat, shovel-like front dictated by the ship’s forward ramp, a “visor” is fitted that can lift up and down. When in the lowered position, this fairing makes the ship much more hydrodynamic, and capable of handling rougher seas than their predecessors.

This modification, along with the ability to generate large quantities of fresh water, double the horsepower, and expanded internal volume for creature comforts, gives the subclass the ability to take on global missions better than its six forebeares. With a range of nearly 6,500 miles, these ships can reliably self-deploy to hotspots on short notice. These modifications come with the penalty of increased mass. The two $26 million ships displace an extra 1,800 tons each compared with the other ships in their class.

The General Frank S. Besson class of ships, like other US Army vessels, are crewed by a little-known cadre of soldier-sailors (they prefer the name Army Mariner). Each of these ships has roughly eight Warrant Officers, and between 14 and 24 enlisted crew. Unlike most other parts of the service,Army vessels don’t run on rank structure necessarily, instead they run on a license-type hierarchy.

In general, it seems that morale aboard these ships and crew retention is exceptionally high, and let’s face it, saying that you are assigned to a ship in the Army is a great conversation starter—so that’s one big perk. Also, these crews work as small, close-knit units, and many get to see exotic ports around the globe—some of which big Navy ships don’t even get to call on.

A further two variants of the same class were built for the Philippine Navy in the early 1990s, and are configured as multi-role patrol ships. Dubbed the Bacolod City class, these vessels are adaptable to different mission sets and are very inconspicuous. A helicopter pad is fitted to the rear of the variant’s superstructure, and small boats can deploy from the ship’s rear ramp area. These vessels can also still be used in a material transport role when needed and are up-gunned with 20mm cannons and enhanced sensors.

The multi-role light helicopter carrier configuration—which the Bacolod City class is a version of—was one of a handful of alternative uses for the General Frank S. Besson class design. Semi-submersible and troop carrier variants were also put forward, but never fully developed.

The US Army’s small fleet of General Frank S. Besson class logistics vessels are gaining a whole new level of prominence as the Pentagon attempts to pivot away from sandy land warfare in the Middle East and towards the watery and remote challenges of Pacific.

While the Navy, Air Force, and Marines have a front row seat at the table when it comes to fighting in a combined manner over the vast distances in the Pacific Theatre, the Army has struggled to find its place in this new strategic order. These LSVs, especially the more deployable two latter ships in the class, could be just the bridge the service needs to make itself more relevant.

The Navy is spending big bucks oncreating huge mobile sea bases, and even Special Operations Command is getting in on the action by creating their own afloat mobile staging base. It would only seem logical for the Army’s LSVs to play a strong role in this growing sea basing and Pacific theatre expeditionary fighting strategy. If anything else, they represent an affordable bridge between small and rudimentary landing craft with localized reach and theJoint High Speed Vessels that are growing in number within the Pentagon’s war-fighting portfolio.

With all this in mind, expect these little-known but capable and proud ships to become a much more “visible” Army capability,—and don’t be too surprised if the service decides to order more of them in the future.