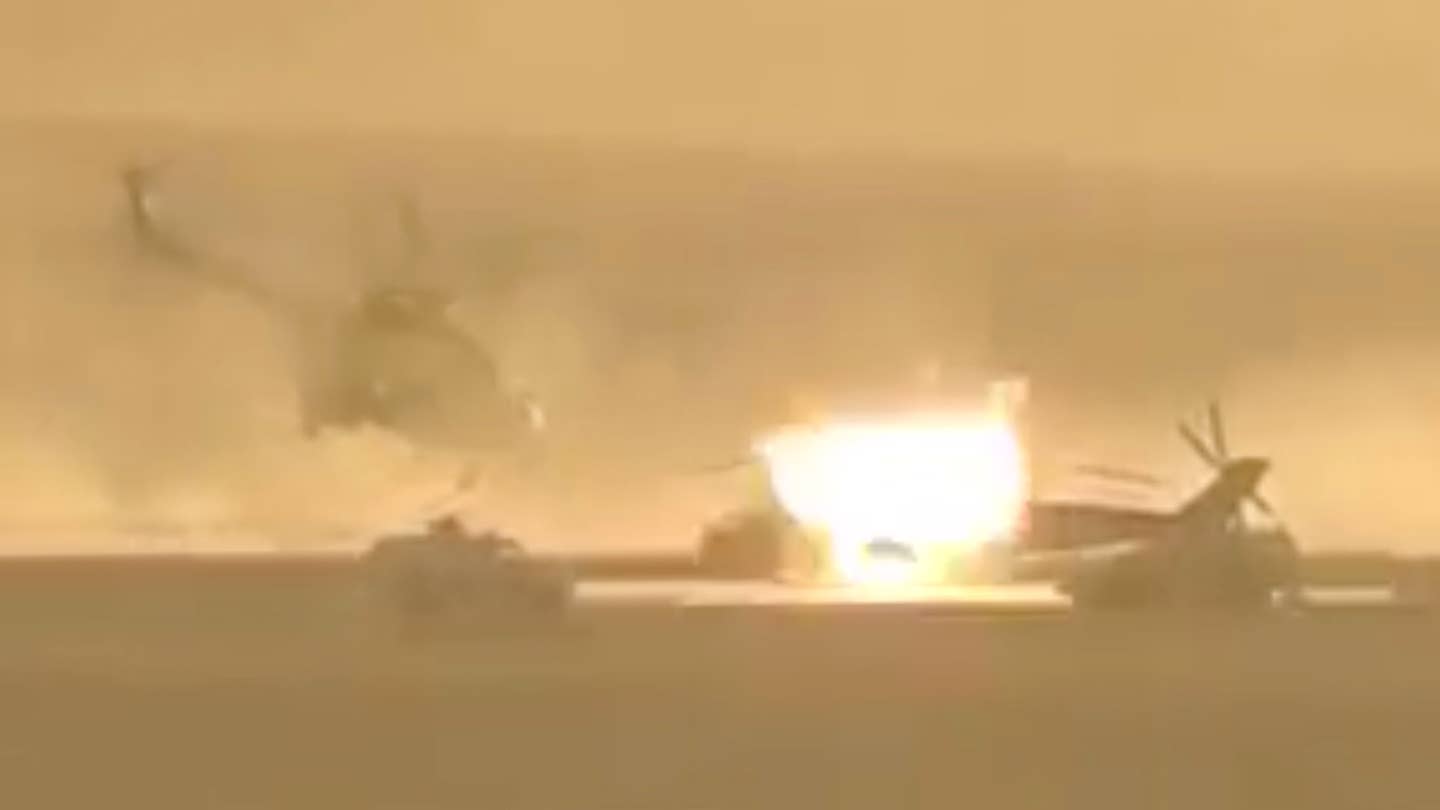 Syria is not a good place to make an emergency landing in a helicopter—or to fly around in one, for that matter. The majority of country’s territory remains hostile to the Assad government, and much of it is equally as hostile to Russian forces fighting alongside the Syrian regime. For example, a Russian Mi-8 that was hunting for the pilots of a Su-24 downed by a Turkish F-16 was filmed getting obliterated by a TOW missile after making an emergency landing. Another video shot last July shows an Mi-24 derivative (likely a Mi-24P) being blasted out of the sky. These are just a couple examples of how hostile the area is to rotary-wing aircraft. Now another video has surfaced which appears to show another Russian Mi-24 Hind variant getting blown up after making an emergency landing.

According to Radio Free Europe, Russia claims that the helicopter had made an emergency landing after coming under fire about 25 miles northwest of the ancient city of Palmyra, in Homs Province. After the helicopter landed, friendly ground forces surrounded it and an Mi-8 swooped in to extract the Hind’s crew. Just as that helicopter was taking off the nearby Hind exploded. A video showing the incident has been released, and as you can see, the rescue helicopter looks like it barely made it out intact. Russia says the Hind crew and the rescue helicopter crew all made it back safely to its master airbase south of Latakia.

It is not clear exactly how the Hind was destroyed. A blast can be heard just before the helicopter explodes, denoting the firing of some sort of weapon, although no missile can be seen striking the helicopter. A large caliber rifle or a recoilless rifle may have been used, or even lucky mortar. On the other hand the Hind could have exploded from damage it already sustained, or even a demolition charge placed on the aircraft to destroy it may have detonated sooner than expected. Also of note is that as the Mi-8 rescue helicopter comes around after the Hind explodes it starts popping flares while seemingly still on or very near the ground.

Regardless of how the helicopter was destroyed, ISIS has claimed that they did it, although their shoot-down claims cannot exactly be trusted.

Although Syrian helicopters have become notorious for dropping “barrel bombs” since the civil war began, Russian attack helicopters became prominent in the conflict after the Kremlin temporarily pulled the vast majority of its fixed-wing tactical aircraft out of the country last March. Although Hind and Hip variants were operating in Syria as early as the late fall of 2015, after the sudden draw-down, Russia inserted some of its most advanced helicopters into the conflict.

Russian attack helicopters remain a potent part of Russia's aerial arsenal deployed to Syria and the Admiral Kuznetsov, Russia only aircraft carrier that has just arrived in the eastern Mediterranean, carries one of the most advanced attack helicopters Russia has ever put into service, the KA-52K. These helicopters will likely see action during a major offensive in war-torn Aleppo that could begin at any time.