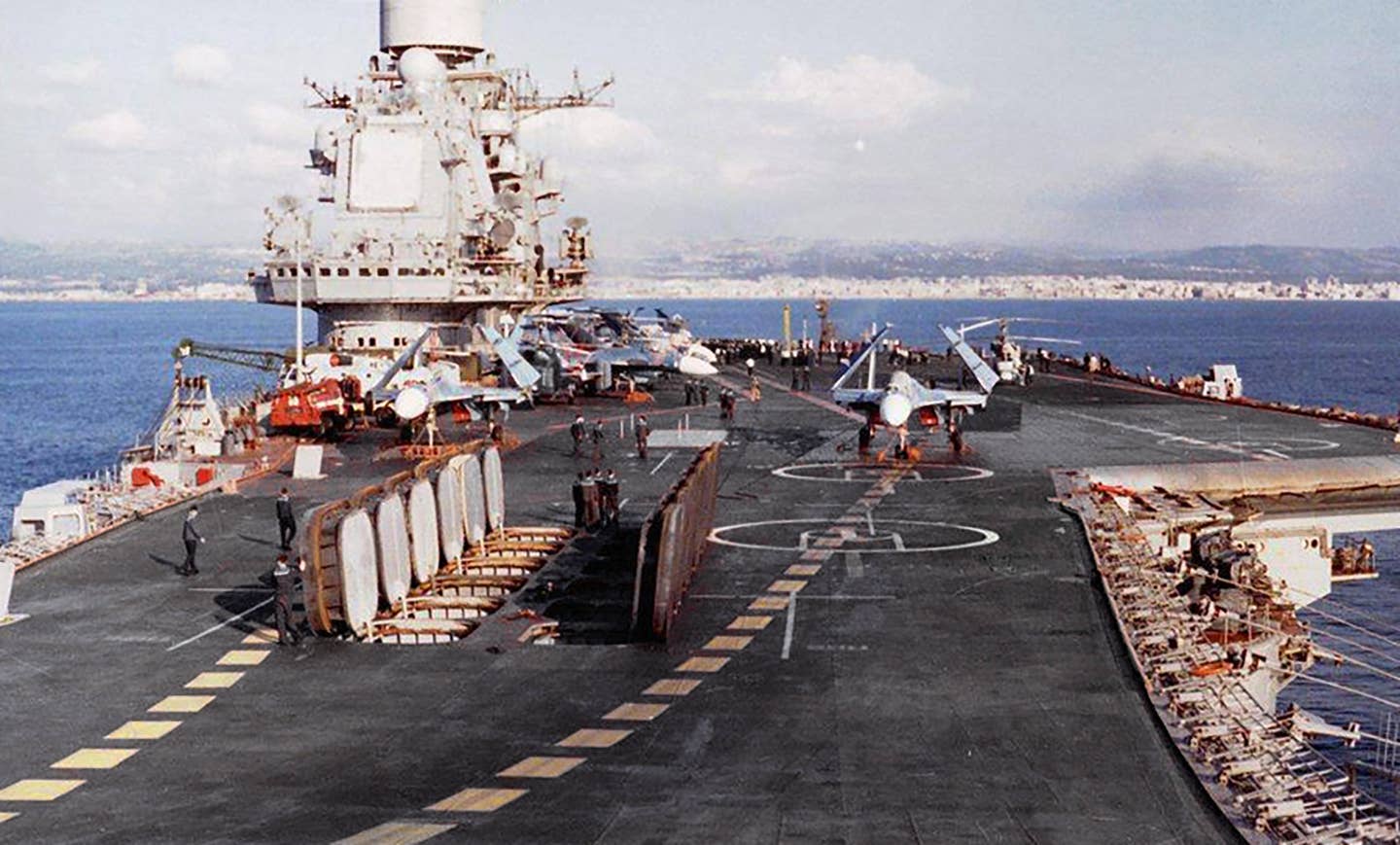 During the Cold War, Russia’s navy prioritized moving huge numbers of cruise missiles around the globe, threatening the power-projection capabilities of American Carrier Battle Groups. In the 1950s and 1960s, aircraft carriers were seen by Soviet military elites as imperialist tools of aggression, and any initiative by the USSR to build one of their own was shot down by the powers that be. Eventually this began to change, but only gradually.

The Kiev class that was launched in the 1970s was a puzzling cross-breed compromise between a heavy missile cruiser and a helicopter and VTOL (Yak-38) tactical jet carrier. Eventually Russian ship designers were allowed to develop the Soviet Union’s first dedicated fixed-wing aircraft carrier out of the Kiev class design, but it couldn’t stray too far from its predecessor’s missile carrying philosophy. The ship that resulted was something unlike anything contrived in the west–a fixed-wing aircraft carrier that also packed a massive punch of its own, regardless of whether its air wing was deployed on its deck or not. This would ship would eventually be known as the Kuznetsov class, with the first example being launched in the early 1980s.

People always seem to be a little confused by Admiral Kuznetsov’s unique designation as a “heavy aircraft-carrying missile cruiser” instead of as a conventional aircraft carrier. At first glance, the ship does seem to pack a lot more missile punch than an American supercarrier, and way more than an American Midway class carrier of the 1980s, which is of similar size and displacement.

The Admiral Kuznetsov is equipped with no less than 24 rotary-style vertical launch systems, with eight missile cells each. These fire the SA-N-9 "Gauntlet" point air defense missile, and a whopping 192 of these missiles are carried in all. In addition, the ship bristles with a virtual wall off close-in weapon systems (CIWS), includingsix AK-630 cannons and no less than eight (notoriously formidable) Kashtan missile/cannon CIWS systems. The ship even sports its own anti-submarine defenses with a pair of UDAV-1 anti-submarine/anti-torpedo rocket systems. Although the UDAV-1 system is a less complex concept, American carriers are just beginning to field a capable defense against torpedoes today.

All this armament is impressive, but it is defensive in nature. Admiral Kuznetsov’s real offensive punch comes from 12 massiveSS-N-19 “Shipwreck”/P-700 “Granit”supersonic anti-ship missiles. Each of these beasts weighs in at 15,500 pounds – about the same as a combat configured F-5E Tiger II fighter. They can be armed with a 1,600-lb conventional warhead, a fuel-air explosive warhead or a nuclear warhead.

These missiles were designed in the late 1970s, and intended to allow Russia’s future capital ships to be able to reliably strike American carrier battle groups from outside the range of their surface-based weapon systems. In combat, the missiles would be launched in large salvos, then scream toward their targets as fast as mach 2.5 at altitude, or about mach 1.5 while low over the water.

If the pop-up missile were destroyed another one would automatically take its place. The missiles could also accept updates from third party sources as well and supposedly had connectivity to the now defunct Soviet-era EORSAT satellite network. Once in the terminal attack phase of their flight, each surviving missile would acquire its own target, and prosecute that target, blazing over the horizon at supersonic speeds and giving (presumably) American close-in weapon systems little time to react.

There is no doubt, the P-700 was born to be a high-end carrier killer. Their speed and numbers would overwhelm a Carrier Battle Group’s defenses, and their individual warheads were large enough to register a kill even on America’s largest surface combatants. The Soviet Navy’s aspirations were clear, with dozen of missiles available on Kirov class battlecruisers, Oscar class nuclear guided missile submarines, and the carriers that would eventually be known as the Kuznetsov class, Soviet surface action groups could have filled the air with these deadly missiles.

Even today, with only one Kirov class (soon to be two) battlecruiser, five Oscar class submarines and one Kuznetsov class carrier in service, when paired together or even operating alone, they represent a formidable threat. Thankfully American CIWS capabilities, the AEGIS combat system deployed aboard US Navy cruisers and destroyers, and the electronic warfare capabilities on all of these ships, as well as the passage of time time, has likely blunted the danger posed by these missiles to some degree.

The thing that is most confusing about the Kuznetsov’s hard-hitting anti-ship missile arsenal is that it seems to be non-existent when you examine the ship. These are big missiles – their launch tubes take up a large portion of the massivenuclear-powered Kirov class battlecruiser’s bow. No such structures are apparent on the Kuznetsov, which looks like, well, just an aircraft carrier.

But look closer and you’ll see signs that the ship’s 12 P-700s are sitting right below the surface of the forward flight deck. Two parallel rows of eight vertical launch tubes are flush mounted, and covered with the same non-skid surfaces as the rest of the ship’s flight deck. The launch cells “disappear” as soon as their hatches are closed.

It seems like an “interesting” design choice to have 30 ton fighters, armed and full of fuel, thundering their way over some of the most powerful anti-ship missiles ever devised, but Soviet designers had their goals to achieve, and they made it work. It is hard not imagine the vigorous “debate” over shoehorning these missiles into the USSR’s only true fixed-wing carrier design, as the space could have been used for aviation related needs. But one way or another the Kuznetsov ended up with this funky feature, one which it has lugged around long after the Soviet Union was no more.

Over the last decade there has been talk about having P-700 Granit missile capability stripped from Admiral Kuznetsov. The area below deck where the missile farm is located would be opened up for more hangar space, a feature the ship has always been short on. This was supposed to happen during a major refit that would see the ship redeployed sometime in the 2017-2018 timeframe. It seems the overhaul never happened, and instead a light refit was executed, as the ship was prepared to sail for the Syrian coast once again in late 2016. This time it would be packing new and upgraded aircraft that would actually fly combat missions over the embattled country.

Whether the P-700 missile tubes are still active and filled with live rounds is unknown. It’s possible, as the ship is slated to go through a much deeper refit when it returns from its Syrian deployment. On its return home, this capability will most likely be removed, once and for all, with new hangar space making room for theKuznetsov’s modernized air wing that will increasingly be made up of MiG-29KR strike fighters and KA-52K attack helicopters.

Other improvements slated for the ship during its deep refit are rumored to include new gas turbines,  replacing the dated boiler system that has plagued the ship’s reliability for years. New missile defense systems, including medium-range surface-to-air missiles and a navalized version of the Pantsir point defense system would be added. New communications systems and sensors would also replace long-obsolete ones.

Russia’s lone carrier has had a colorful past to say the least. It has had three names, Riga, Leonid Brezhnev and Tbilisi before becoming the Admiral Kuznetsov. Kuznetsov’s sister ship, the Varyag, is nowChina’s first carrier, the Liaoning. How it got to China is a whole saga unto itself.

Admiral Kuznetsov sat for years before being reactivated, and the way the Russians supposedly moved her from the Black Sea to the Severomorsk following the fall of the Soviet Union is interesting to say the least. One Russian wesbite recounts a legend that may be more fiction than fact, but it is entertaining nonetheless:

Following the collapse of the USSR, the Admiral Kuznetsov could have been inherited by Ukraine, which claimed ownership of it. In 1991, the ship, then assigned to the Northern Fleet, underwent tests with the Black Sea Fleet in Feodosia, leaving it in Ukrainian territory. However, the first deputy commander of the Northern Fleet flew to Ukraine at once and stepped in. The vice admiral gave the order to raise the anchor immediately and head for Severodvinsk. With its navigation lights off, the ship left its harbor and spent more than three weeks sailing to its permanent base without any aircraft and without two thirds of its crew, who were off-duty at the time. Having saved the aircraft carrier, the vice admiral rightly judged that the sailors would “catch us by train,” and that the aircraft remaining at the onshore airbase would “get there by themselves.”

Sadly, in recent years the ship has been more associated with tragedy than triumph, especially in the western press. Its drags around a thick black smoke trail that makes the ship seem like an antique propaganda tool more than a fighting ship. On previous deployments the carrier has suffered chronic mechanical failures, and deadly mishaps. An ocean-going tug follows the ship around as a precaution – not exactly the sign of a first rate naval vessel. Its fixed-wing fighter aircraft,the Su-33, is visually impressive, but not exactly cutting edge even when it entered service decades ago. Up until a recent light upgrade, its combat capabilities were largely discounted.

But things seem to be looking up for Russia’s lonely carrier. New aircraft and investments in the ship appear to be materializing, albeit slowly. Russia plans on keeping Admiral Kuznetsov in service for at least another decade, but it will likely soldier on far past then. In the meantime, the world will be watching the ship and its upgraded contingent of aircraft, and what they will be doing off the shores of Syria.

Currently, a multi-national carrier group, with the French nuclear-powered carrier Charles De Gaulle at it center,is also prowling the eastern Mediterranean. Once the Kuznetsov and the largest Russian surface action group assembled since the end of the Cold War arrive on station, the eastern Med will become a crowded patch of sea and sky. That much traffic could make things ‘interesting’ to say the least.

As of publishing this piece, Admiral Kuznetsov and its escorts are steaming past Portugal and approaching the Strait of Gibraltar. We will keep you updated as the deployment unfolds.