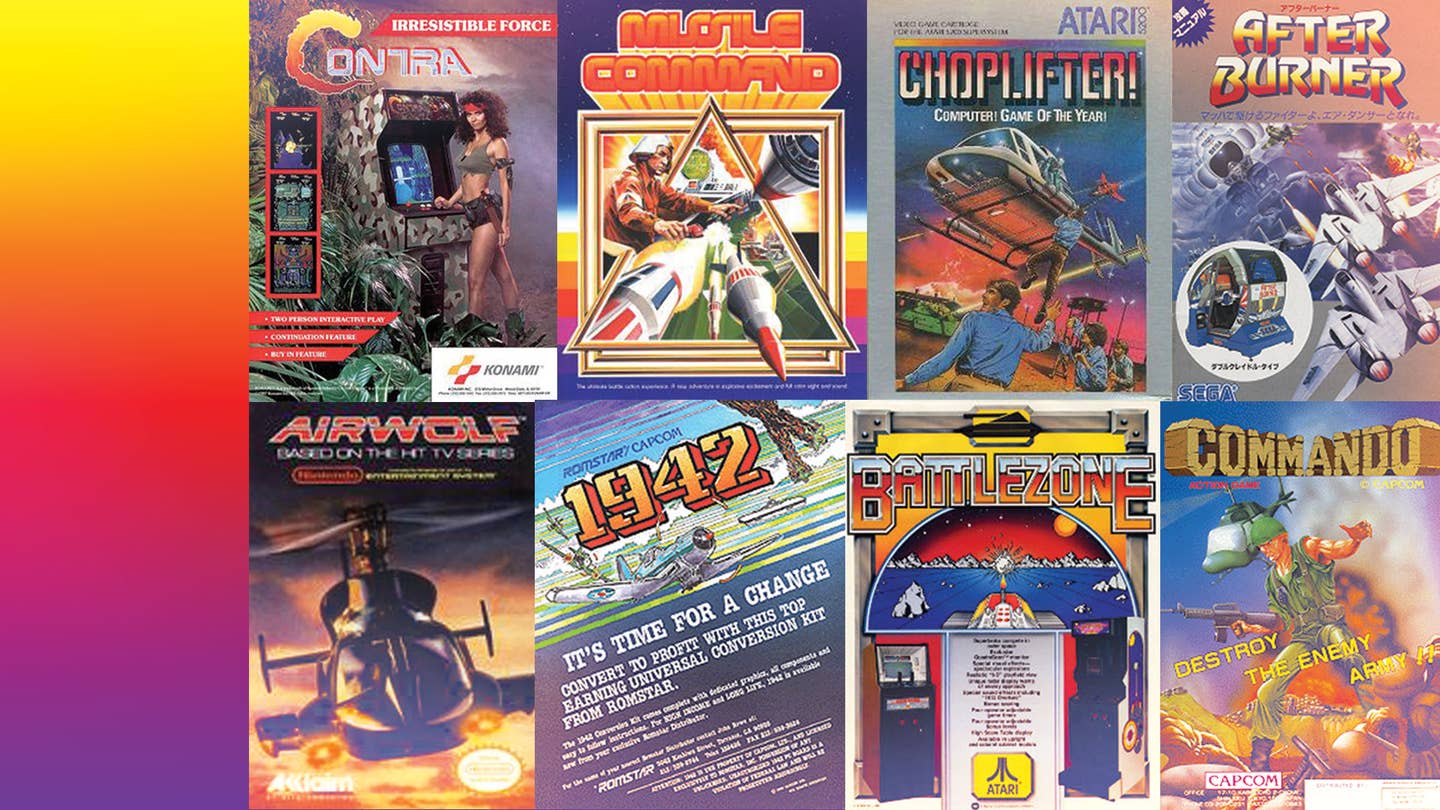 The graphics and the soundtracks of 1980s arcade games were crude. The storylines? Spartan. Yet, duking it out in the 1980s was just brilliant: Somehow even more stressful than the very best of our modern shooters. It was a wonderful time.

For this list, only military games make the cut. That rules out space games like "Asteroids," "Defender," "Galaga" and "Star Wars," and favorites like "Major Havoc" and "Moon Patrol." Even Spyhunter, a classic with lots of weapons and dodging and shooting has to sit this one out. But no sweat. The arcades of the 1980s had almost an almost boundless number of fantastic military games. And the best of them, the games that hold up all these years later? They’re right here:

Known almost as much for its awesome mistranslation as for its scrolling gameplay, Seta’s 1988 helicopter attack game was both a graphics juggernaut and bit of a gameplay jumble—especially in two-player mode, where the second player’s virtually identical chopper can easily be mistaken for yours. Which inevitably leads to augering in because, while the warbird in Twin Eagle can dish a ton of damage, it’s a fragile little thing and can only take one hit before it’s finished.

It never had the popularity of its contemporaries from 1980, Missile Command and Battlezone, but Armor Attack was a brilliant arcade game. A monitor overlay added depth to the bitmap graphics, and ever-increasing game speed kept things challenging. The best Armor Attack cabinets were of the flat, table-like, PacMan variety; great for straining your neck and even better for holding a drink and a slice of pizza.

Dropped off in the tropics by a helicopter, Super Joe battles his way through palm trees and enemy soldiers, attacking ever upward on "Commando"’s scrolling screen. An eight-way controller means Super Joe had to unleash a somewhat unscientific barrage of gunfire and grenades to get it done. The bullets? Those were unlimited, but the grenade supply had a knack for running thin real quick. Combined, it was a test of hand-eye coordination for sure, but "Commando" was good fun, and more than enough to land the number eight spot.

Who knew something so simple could be so infuriatingly challenging? Or so ominous. The player defended cities from the rain of nuclear missiles with an ever-dwindling supply of surface to air missiles. They started slow of course, and turned into an interminable rain of MIRVs. Or, you know, tiny pixelated streaks across the screen that would reduce your tiny pixelated cities to tiny pixelated rubble.

An unusual port from console to the arcade makes "Choplifter" a bit of a curiosity. And the funky controls? Well, those made "Choplifter" a sonofabitch. But the game was as addictive as they come. Fighting through tanks and jets was all well and good, but "Choplifter" was all about a daring rescue mission. That’s what made the game so delightful–dancing along that precarious edge between shooting up the baddies, and hard maneuvering just above the ground that might make for a better rescue attempt.

It was a match made in heaven: The very best of 1980s television mixed with the very best of side-scrolling 1980’s helicopter-based gameplay. Elements of "Choplifter," "1942," and "Twin Eagle," all came together with "Airwolf"’s badass theme song. It’s very nearly a perfect blend. One that would, if not for the cruel hand of history, have landed "Airwolf" much higher up the list.

Capcom’s first saw an American aviator flying a twin-tailed P-38 through the fearsome air forces of the Japanese Imperial Navy. Mastering machine guns and the vertical loop, fearless flyers would battle through swarm after swarm of swooping and attacking Zero and Hein fighters, then duke it out with a big boss Nakajima bomber, all the way to Tokyo. "1942" was the first in a series of vertically scrolling shooters from Capcom. While sequels upped the ante for graphics and weapons payloads, the original gets the nod here for its originality and quality of game play.

Like "Missile Command," "Battlezone"’s simplistic wireframe graphics didn’t boast much detail. But it didn’t matter, the depth and action that Atari was able to create within those pencil-thin lines is brilliant to this day. While the occasional alien saucer means "Battlezone" treads a thin line with the space game rule, the tank-on-tank and guided-missile dueling is enough to secure it a place on our list; and the delightfully frustrating first-person gameplay boosts it even higher. But most compelling? It’s "Battlezone"’s hard-earned legitimacy. Slightly modified, stripped of its UFO’s and equipped with a yoke from the tank itself, the game was adapted to train American Bradley Fighting Vehicle crews. The shooting action clearly carries with it some nostalgia as well, as "Battlezone" has recently been rebooted for virtual reality and the PlayStation 4.

Lance and Bill strafe their way across the screen, somersaulting their way through the jungles of the future. "Contra" set the standard for run-and-gun gameplay. Its graphics were bold, and perhaps the best of the era. But the best part of "Contra"? The teamwork: fighting, heads-up, against a busy and challenging enemy with a capable partner only improves an already fantastic game.

A classic third-person air-to-air shooter framed around the legendary F-14 Tomcat. From takeoff to your inevitable fiery demise, "After Burner"’s action was bright and colorful and just relentless. Every version of "After Burner" had kickass fighter-style controls, and would-be pilots fired its weapons from the joystick, just like the real deal. The best of the arcade versions had moving cockpits with stereo sound, and even the plain-Jane iterations of the game were good enough to totally ruin your quarter supply come laundry day.