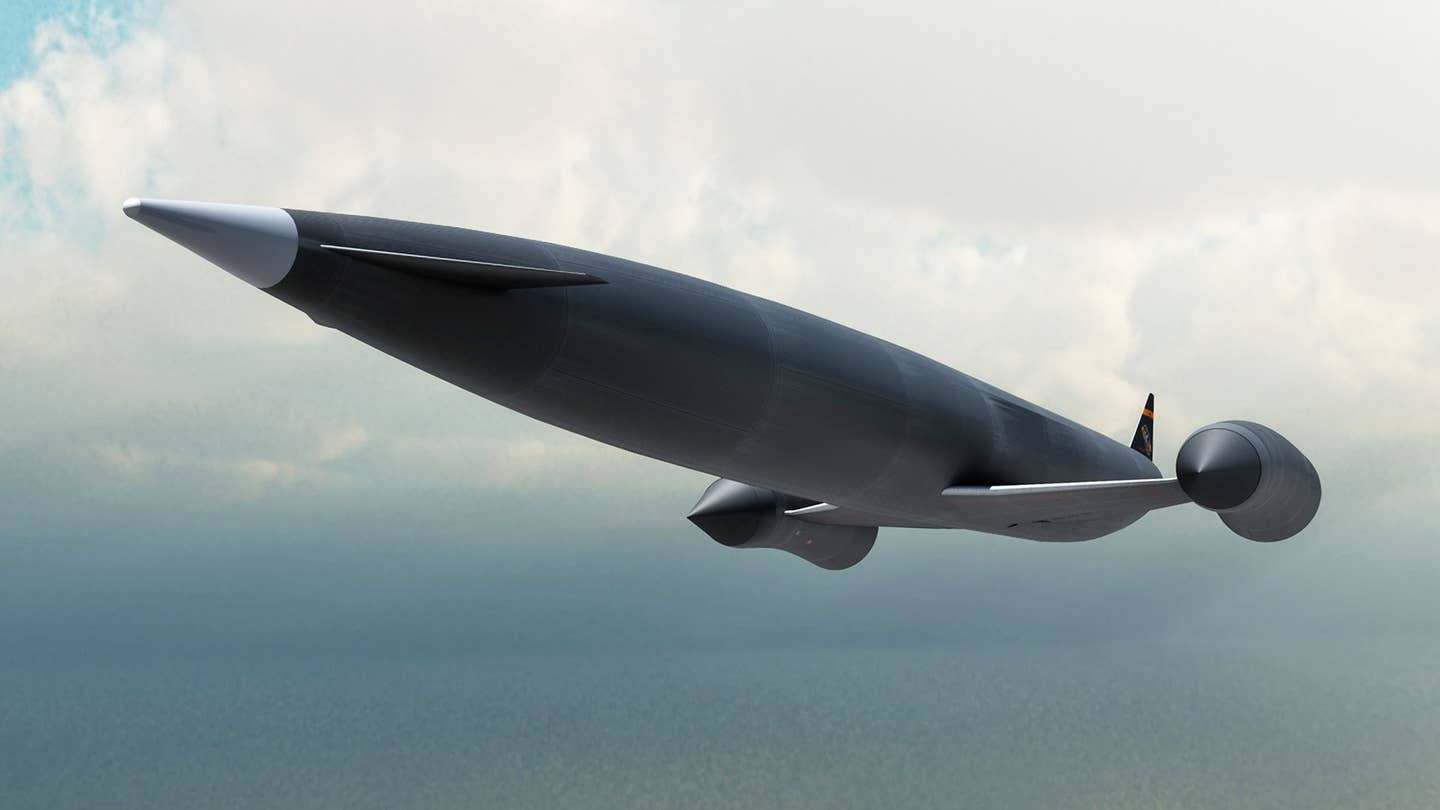 There's no doubt that the USAF is interested, once again, in very high-speed aircraft, and the service’s drive to use new technologies to cheaply (and even clandestinely) access space has only increased in recent years. Now, the Air Force Research Laboratory (AFRL) is looking at Reaction Engines Ltd’s Synergetic Air Breathing Rocket Engine (SABRE) as a potential solution for these exotic mission requirements.

According to Aviation Week, the UK-based company’s SABRE powerplant works as such:

“AFRL’s studies of the Synergetic Air-Breathing Rocket Engine (SABRE) cycle, which uses atmospheric oxygen and liquid hydrogen from a standing start to above Mach 5 when it switches to onboard liquid oxygen, have shown the concept is thermodynamically feasible. The engine and innovative precooler at the heart of the cycle are ultimately aimed by Reaction at a single-stage-to-orbit (SSTO) launch vehicle dubbed Skylon.”

The company’s hydrogen powered Skylon spaceplane concept has been around for some time now. Versions of it even include a hypersonic cruise-capable airliner that uses the company’s proprietary lightweight heat exchangers to cool inlet air temperatures, and a tweaked version of the SABRE engine design called Scimitar. Like SABRE, this engine could theoretically also run at subsonic speeds, allowing the aircraft to operate more seamlessly within existing air travel infrastructure and with a larger margin for error at lower velocities. It would also allow the aircraft to slow to subsonic speeds for travel over populated areas.

Although single-stage-to-orbit has long been the holy grail of orbital spaceflight, the USAF is eyeing the SABRE engine for the slightly less ambitious role of hypersonic flight, especially for delivering payloads into orbit using a two-stage-to-orbit method.

Under such a concept, a SABRE-powered mothership booster would lift a smaller rocket or space plane to the upper reaches of the atmosphere, and to very high speeds, before sending the second stage and its payload on their way. Like the more ambitious single-stage-to-orbit Skylon concept, this concept would see the SABRE-powered mothership takeoff and land horizontally on a runway, just like any other airplane.

Also interesting is that this two-stage-to-orbit concept, which AFRL is collaborating with SpaceWorks Enterprises to develop, leverages two distinct aircraft payload configurations—one partially reusable and one totally reusable.

The simplest configuration features a rocket launched from an internal ventral bay of a 150-foot-long, twin SABRE-powered mothership/booster aircraft. The aircraft would accelerate to near mach five during its climb before changing from air-breathing to internal liquid oxygen-guzzling mode. While still accelerating, the airplane booster will climb to a whopping 260,000 feet, hitting mach eight before releasing its second stage booster from its belly. At this point, the SABRE-powered booster would turn back and descend, and could even use its engines in air-breathing mode for a powered recovery. Meanwhile, the expandable second-stage rocket booster would insert its payload into orbit.

This semi-reusable configuration would theoretically be capable of putting 5,000 lbs in a 100 nautical-mile-high orbit with a 28.5-degree inclination from Cape Canaveral Air Force Station. It would also make loading that second stage booster easier and less infrastructure-dependent when compared with mounting it on the aircraft’s spine.

The other, more ambitious configuration sees a scaled-up SABRE-powered first-stage booster/mothership vehicle about 190 feet long paired with a smaller sub-orbital space plane mounted on the aircraft’s spine. This configuration is similar to other parasite concepts, like the M21/D21 concept.

This totally reusable design would see both boosters return to earth via a horizontal runway landing, the second stage sub-orbital booster slinging around the earth to do so. This configuration would allow for 20,000 pounds to be put into orbit, although it would require more infrastructure on the ground to do so, including a large gantry crane to lower the plane-like second stage booster onto the first stage’s spine. The combined launch system’s gross takeoff weight would tip the scales at a massive 1.3 million pounds—slightly heavier than a fully loaded Airbus A380.

Although development costs would be massive, there is an obvious potential for big cost savings and increased space access synergies with such a system, and there are other possible ancillary tactical applications for it as well.

For instance, being able to insert something into orbit without launching it on a predictable and detectable rocket is an enticing proposition for the USAF. Also, there's the possibility that this system could be used to satisfy the prompt global strike mission set requirement.

Under such a concept, instead of launching a payload into orbit, the SABRE-powered mothership could send a weaponized rocket onto a suborbital path toward a high-value, time-sensitive target. If one of these aircraft and its second-stage booster with a weaponized payload were kept on quick reaction alert, being able to launch in minutes instead of hours, a time-sensitive target could be struck unexpectedly and reliably, in short order, nearly anywhere in the world.

Another question is, what type of cross-range performance could such a craft possess? An aircraft that hits mach eight and 260,000 feet, and has a payload bay, could potentially be a used as a reconnaissance and attack aircraft in a similar fashion as Lockheed’s SR-72 concept.

The AFRL is now focusing on getting funding to further develop and test Reaction Engines Ltd’s innovative precooler technology (which is essential to the SABRE engine design) at simulated speeds up to mach five, and with all the heat accumulation that goes along with that extreme flight environment.

Yet it seems likely that other USAF initiatives are are moving to develop similar two-stage-to-orbit concepts, as the commercial marketplace surely is. In fact, these concepts have long been at the top of the DoD’s “bleeding-edge” wishlist. Yet just because other programs—classified or otherwise—may be attempting to accomplish the same mission set, they could be aiming to do so in significantly different ways, and investing in multiple approaches to the same goal lowers risk. Or, in some cases, two separate programs may be aiming to achieve the exact same goal in the same way, as the USAF’s metaphorical right hand doesn’t always know what its black glove-clad left hand is doing. And it's just this type of program, and this size and type of vehicle, that would seem right at home in Area 51’s massive new hangar.

It will be interesting to see where the USAF’s involvement in SABRE leads. If it seems to disappear without explanation, that's as good a sign as any that it has real merits.