This Nuclear-Capable 1950s Missile Once Delivered the U.S. Mail

One of America’s first cruise missiles was tapped to deliver 3,000 letters—and a message to Russia. 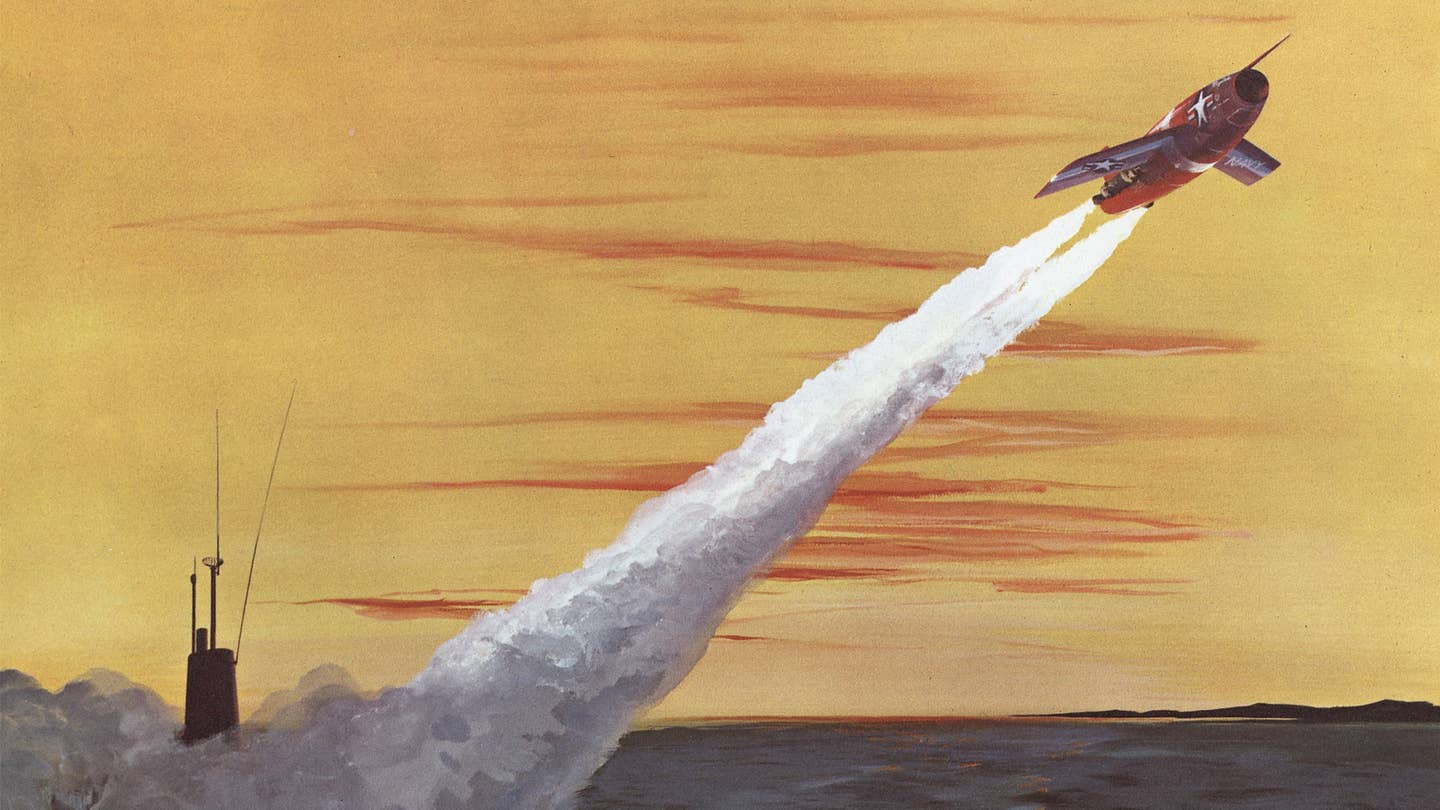 A Regulus I missile had pretty lines. In profile they were cigar-shaped, with the purposeful, flat intake nose of early 1950s fighter planes like the F-86 Sabre that widened amidships over an Allison turbojet engine, then tapered again at the exhaust. A rakish mid-mounted wing provided the lift needed to soar gracefully over the ocean, then over Russian beaches, cities, airfields, or factories, where its 3,000-pound thermonuclear payload would detonate, incinerating whatever lay beneath.

And as a nuclear strike weapon, the United States Navy’s Regulus I was an appropriately terrifying thing. It had its conceptual roots in the Nazi V1 buzz bomb, but instead of launching from solid ground, the Regulus was flown from the deck of ships, or submarines. In an era before ballistic missiles, it was the Navy’s first nuclear deterrent—514 of them were made, and for the better part of a decade, submarines with hangars for the Regulus built onto their decks quietly cruised the seas.

Pretty though it may have been, the Regulus I was a purposeful bird. It was cumbersome to launch, requiring its host to point it toward its distant target, and it required the combined guidance systems from two different vessels to guide it there. And while a modern cruise missile is so accurate that the distance between target and impact is measured in feet, at its extreme range, the Navy measured a Regulus I's accuracy in miles. But, armed with a 1- or 2-kiloton W27 warhead, that was good enough.

So the Regulus I was an odd choice to play postman on a balmy Florida morning in 1959. But, with the blessing and encouragement of the Postmaster General, that’s exactly what it did.

The flight would have looked like any other missile test. Aimed at Naval Station Mayport, near Jacksonville, Florida, the bright orange Regulus I was fired from the deck of the submarine USS Barbero. It was a 100-mile shot—a range within which the missile was good and accurate—and instead of a 3,000-pound nuclear payload, the landing gear-equipped training missile was loaded with 3,000 letters addressed to senators and dignitaries, even the president.

Examples of the missile's unusual cargo, and even the boxes fitted into the payload compartment, have been preserved by the National Postal Museum. While the letters inside were jocular and enthusiastic about the accomplishment, the underlying message was about as subtle as the typical payload of the Regulus: If the Navy can deliver the mail, the Navy can deliver the bomb.

Postmaster General Arthur Summerfield was on hand for the unloading of the precious payload. It would be the first—and last—U.S. Mail to be delivered by missile. Before taking the reins of the Postal Service, Summerfield was a politician, and a General Motors dealer in Michigan. He had a vision for a modern postal service, all conveyor belts and machine sorting, and as visionaries are wont to do, he had a few words to say at the successful delivery of the mail by the Regulus:

“This peacetime employment of a guided missile for the important and practical purpose of carrying mail, is the first known official use of missiles by any Post Office Department of any nation. Before man reaches the moon, mail will be delivered within hours from New York to California, to Britain, to India or Australia by guided missiles.”

In hindsight, his enthusiastic endorsement of the weapons system’s use for a peaceful purpose would be as incorrect as the idea was short-lived. And the Regulus itself didn’t fare much better. It was swiftly replaced by the Polaris, the latest in a new generation of ICBMs. Left jobless, the big, handsome missiles were assigned to duties as target drones. Even the USS Barbero, survivor of the Second World War and stalwart patroller of the deep, wouldn’t last: Just five years after participating in the first mail delivery by missile, she was outdated in the eyes of the Navy, then used as a target and sunk by another submarine off Pearl Harbor.

Sixty years later, the Regulus is considered the predecessor of today’s Tomahawk cruise missile, and the world's navies still patrols the depths with fleets of nuclear-armed submarines. But the idea of mail delivery by missile? That one never quite took off.