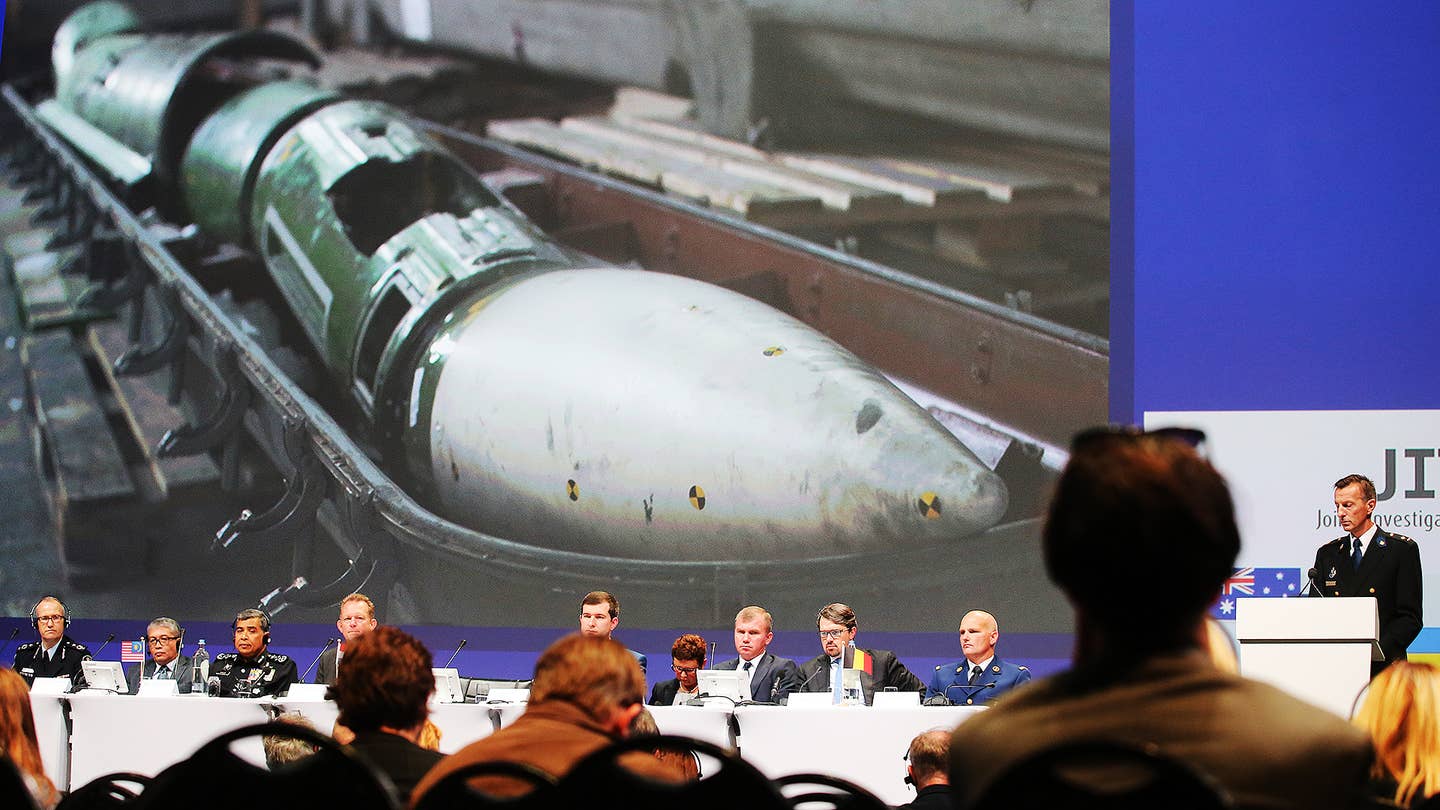 The Dutch-led Joint Investigation Team tasked with figuring out exactly what happened to Malaysian Airlines Flight 17 (MH17) on July 17th, 2014 has released their preliminary findings. The team made up of investigators from Australia, Belgium, Malaysia, the Netherlands and Ukraine has concluded that indeed a SA-11 Buk surface-to-air missile system downed the hapless airliner, and that weapon was sent into Ukraine from Russia and removed shortly after the engagement.

"Based on the criminal investigation, we have concluded that flight MH17 was downed by a Buk missile of the series 9M83 that came from the territory of the Russian Federation," chief Dutch investigator Wilbert Paulissen said during today’s presentation on the group’s findings.

He went on to say that the missile moved from Russian territory and into Russian-backed rebel-controlled territory in eastern Ukraine on the morning of the 17th, the same day MH17 was shot down.

The investigation has also largely defined the surface-to-air missile system’s route and other details surrounding its transport. The official report states:

“The system was transported from Russian territory into eastern Ukraine and was later transported on a white Volvo truck with a low-boy trailer. The truck was escorted by several other vehicles and by armed men in uniform.”

The site where the missile was fired has also been officially pinpointed as just outside the village of of Pervomaiskyi, which was held by pro-Russian forces at the time. After the shootdown, in which all 298 lives aboard MH17 were lost, the Buk system was quickly moved back into Russian territory the next day. The report reads:

“After the BUK missile had been fired, the BUK-TELAR initially drove off under its own power. A short time later it was reloaded onto the Volvo truck and transported back to the Russian border. During the night, the convoy crossed the border into the territory of the Russian Federation.”

This timeline was corroborated using many first-hand accounts, photos, videos and intercepted phone and radio communications (see video below).

These conclusions come as no surprise but the incredible amount of information used by the Joint Investigation Team used to back them up does. Meanwhile, Russia has done seemingly anything and everything to skew public perceptions surrounding the shootdown, and possibly to mask their involvement in it.

The investigation will now move to focusing on the roughly 100 individuals that have been identified as having been directly involved with the shootdown and facilitation of the missile system’s movement and operation. The report makes it clear that the most pressing issue now is to figure out who was within the chain of command that decided to fire the missile. Whether that was a decision made among the missile operators themselves or via a larger command and control network is where the investigation will focus its efforts going forward. One set of conversations among still unidentified individuals is of particular interest to investigators, you can hear that conversation, and read an English transcript of it here.

The investigation’s mandate has been extended through January of 2018. And although identifying those directly responsible for shootdown may be possible, apprehending them and bringing them to justice may be a far more challenging affair and who knows how high up the trail of guilt leads. Additionally, Russia has already used its veto power on the UN Security Council to stop the creation of a tribunal that would have brought those responsible to justice.

Russia has long tried to blame the shootdown on Kiev, and Ukraine’s inclusion in the investigation has infuriated Moscow. As to the JIT announced findings, Maria Zakharova, spokesperson for Russia’s Foreign Ministry, said "Russia is upset that the situation around the MH17 crash inquiry is not changing. The results of the Dutch prosecutors confirm that the inquiry is biased and politically motivated,” and that “arbitrarily assigning blame and dreaming up the desired results has become the norm for our Western colleagues.”