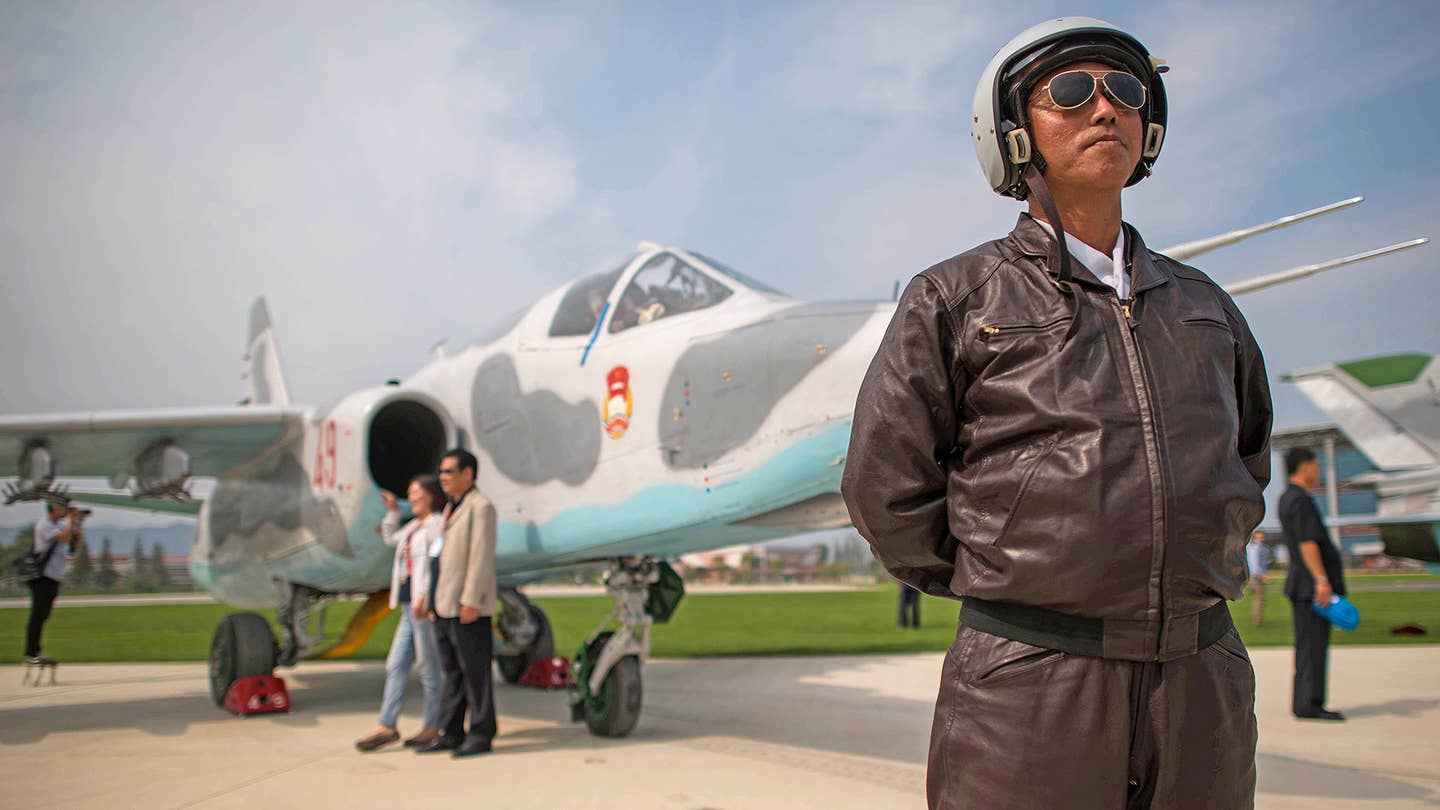 As the USAF was putting on its own intimidating air show just south of the demilitarized zone, North Korea was doing the same—although in a much more traditional manner. Last year it was announced that the Hermit Kingdom would be doing the unthinkable: opening its doors to international travelers and press for an air show displaying its remarkably antiquated air combat and commercial aviation capabilities. The whole thing seemed so absurd that some speculated if it was some sort of bluff, or worse. Traveling to North Korea has its dangers; it's a place where making a poor choice can result in decades of hard labor in one of the most brutal penal systems on the planet.

The show was slated to take place in the eastern port city of Wonsan, at Kalma International Airport, which is one of North Korea’s airports that underwent renovations in recent years. Although the idea that these locales receive enough air traffic to actually justify such improvements remains highly questionable. Press who wanted to attend the show would supposedly have a full itinerary of aviation-related and cultural events in store for them—not mention that just flying into North Korea can be an adventure in its own right.

State-owned and operated Air Koryo is known to be the worst airline in the world, having an awesome one-star rating. They fly an eclectic fleet of aircraft largely comprised of tired old Soviet-era airliners and transports. It’s an aviation aficionado’s dream.

I've known aviation photographers who have gone to North Korea on packaged tours, but this was a whole different animal. When you also consider the devolving geopolitical situation between North Korea and South Korea over the last year, it seemed like a trip that definitely had its risks. Still, the hardcores signed up and took the gamble, and it apparently paid off. From most accounts, it seems like it was a pretty awesome—although extremely bizarre—adventure.

Now that the show has concluded, photos of the event are starting to emerge. They depict a fairly lively set of performances by most everything flyable in North Korea. A MiG-29s Fulcrum, the type that's typically used to guard Pyongyang, and Su-25 Frogfoot tactical jets all put on solo performances, and there was even multi-ship demonstrations put on by the North Korean’s MiG-21, Su-25, and MD500 squadrons.

The oddest part of the whole affair seems to have been the appearance of a large-scale, radio-controlled model of an F-16—in USAF Thunderbirds livery, no less. The aircraft was one of multiple radio-controlled aircraft that were displayed before a few hundred visitors and members of the international press, and the roughly 10,000 to 15,000 North Koreans who attended. As for the backstory behind the little F-16, the North Koreans were not keen on giving up any details.

Also of note is that the Chinese-built versions of the MiG-15, MiG-17, and MiG-19 that continue to fill out the ranks of the struggling North Korean air arm made no appearance at the show. This is really no surprise, as Pyongyang wants to show its air force in the best light possible to the world, and these aircraft are not exactly relevant beyond training purposes when it comes to modern air combat. There was also the absence of the MiG-23, although serviceability and attrition rates for the type are historically atrocious, causing them to disappear rapidly from air arms’ inventories over the last decade and a half.

The whole idea of an impressively open air show in North Korea goes against the longstanding secretive nature of its military, especially considering that their geriatric Air Force is known to have extremely low readiness and aircraft availability rates. It is also absolutely bizarre that, among missile and nuclear tests and the flinging of threats between the North and the South about wiping out each other’s capitals, there was this seemingly positive event that included visitors from the same nations that have placed increasingly damning sanctions on North Korea and the Kim regime in particular.

Yet we do know that Kim Jong Un loves aviation. It has been an obsession of his since he was a child, and he even fancies himself a pilot. So maybe, just maybe, this love for aviation is one tiny inroad that can be exploited in the future when it comes to opening North Korea more to the outside world, and the ideas that come along with it.

Check out the full image gallery of the show below: