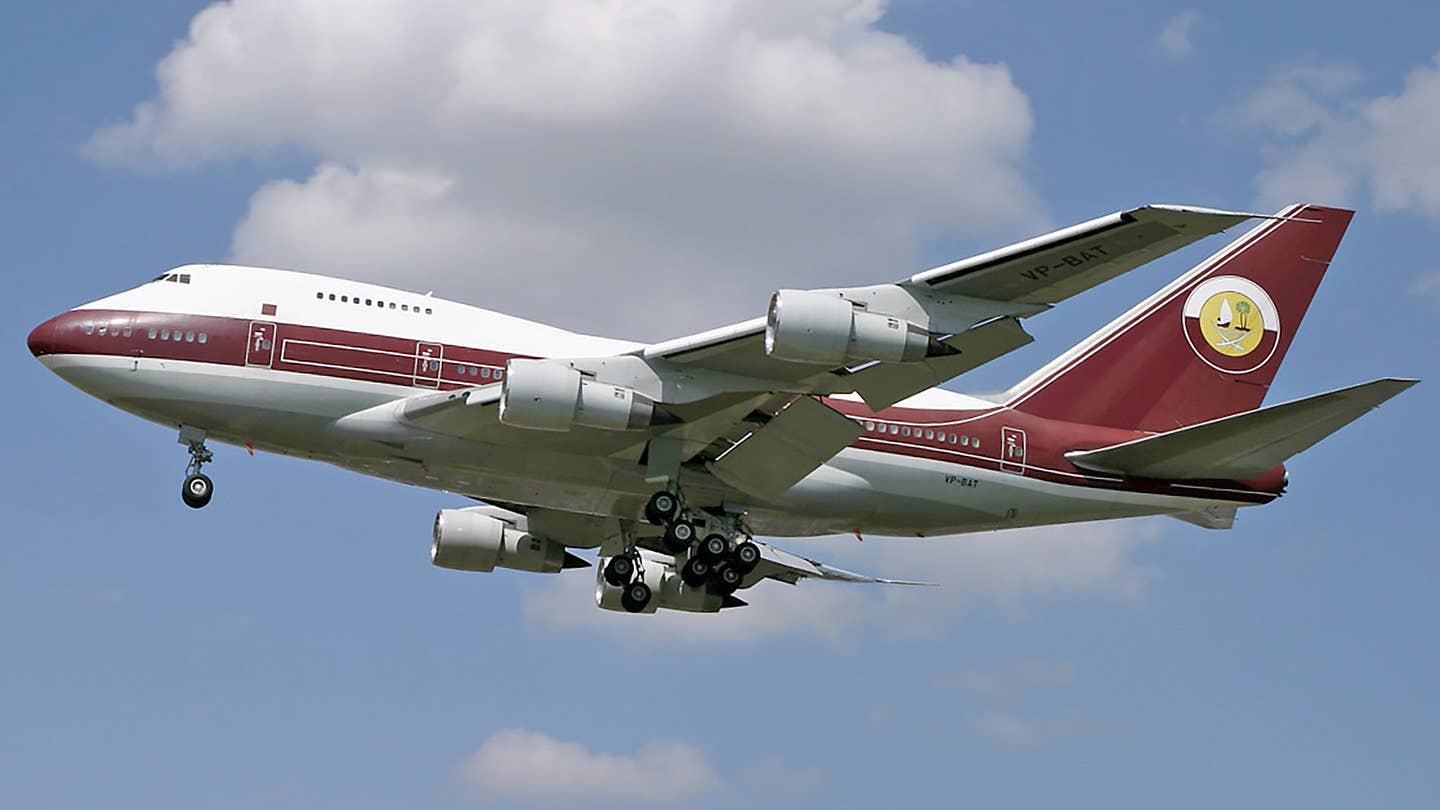 An incredibly clean example of one of the most beloved aircraft in the airliner world, the 747SP, is up for sale. And this shorty ‘fo-seven, registered VP-BAT, is not just any 40-year-old human hauler. It served for two decades as the centerpiece of the Qatari Royal Flight, and its interior reflects this unique and extravagant legacy.

The aircraft’s inside is a setting for a king—literally: It was used by Qatar’s reigning emirs, most notably Sheikh Khalifa Bin Hamad Al Thani. The plane’s interior is clad in blue leather, the finest wood and, of course gold, lots and lots of gold! In all, the pint-sized 747 is equipped to fly 89 passengers in its various state rooms, dining salons, offices, meeting spaces, and, yeah, that throne room. There are also 12 first class seats, 18 business class seats and 31 “tourist class” seats, according to this ad on Controller.com.

This special 747SP is also equipped with its own “fly away kit,” which includes two spare engines, an auxiliary power unit, two spare nose wheels and two spare main wheels, among a ton of other parts. Basically, you could rebuild a substantial part of the jet to get it back in the air even at the most remote of places.

According to the ad, the jet has been immaculately maintained, which is no surprise considering who flew around on it, but it is no spring chicken. First delivered to Pan Am in 1979, it has 68,602 hours and 10,288 cycles under its wings. The jet’s most youthful JT9D turbofan engine has over 55,000 hours on it, and the highest-hour engine more than 75,000 hours.

This jet is not a cheap at the gas pump. Topping off with 50,360 gallons of jet fuel will run about $200,000. For the current owners, that may not have been a problem, since they run a major oil and natural gas exporting country. But by today's standard , the JT9Ds is not exactly a fuel efficient jet. Even the USAF’s massive C-5 Galaxy, with its military derivative of the same engine, the TF39, is going through a reengineering process (C-5M program) to save gas and enhance reliability.

Only 45 747SPs were ever built, and just a handful of them are still flying today. The type was designed to offer longer range that the 747-100, so it sacrificed size (and thus weight). Until the introduction of the next generation 747-400 in 1989, the 747SP was the longest range airliner in the world.

The aircraft is not only shorter than the standard 747-100, its tail is larger and its flaps are solid instead of slotted. It is also faster than the standard 747. These traits made the aircraft attractive VVIP conversions for rulers who wanted the majesty of “the queen of skies” but also longer range, faster transit speeds and better airfield performance than their full-sized cousins. Plus, they were cheap on the second-hand market.

Today, less than a dozen 747SPs are flying. Maintaining and operating first-gen 747s has become prohibitively expensive for some users, and most of them are nearing four decades old. These surviving flyers include NASA’s SOFIA airborne observatory and Pratt and Whitney’s engine testbed aircraft. One is owned and operated by Ernest Angley Ministries, another by the Sands Corp of Las Vegas. Nearly all the others are flying for Arab royals, and are decked out with elaborate communications systems and defensive aid suites. There is a whole site devoted to these awesome jets, complete with flight tracking and a ton of history.

The Qatari Royal Family has little interest in keeping a near antique 747SP mostly because they are taking shipment of two of the world’s largest and most capable new VVIP jets, the Boeing 747-8i BBJ. The cost of the aircraft alone is around $360 million, and calculating the elaborate interior, special communications systems, and a whole host of other modifications, the price balloons to well over half a billion dollars.

Here is a conservative idea of what you can fit in one of these new jets, including tubular elevators that lower VVIPs right onto the tarmac, and space in the hold to haul around a motorcade.

How much is Qatar’s lovingly maintained 747SP? “Make an offer!” But for context, another VIP-level 747SP owned and operated by Fry’s Electronics was recently listed at just $2.5M, and it had less engine time than the Qatari bird (although it's doubtful the interior could compete). That is about the price of Cessna Citation Mustang.

Depreciation is a bitch.

We can only hope this gorgeous classic will be plowing the skies for another owner with lavish tastes and a seriously fat wallet. It will be a very sad day when the 747SP touches down for the last time.

The War Zone contacted the sellers of the Qatari 747SP, but they declined to provide any other information or photos at this time.