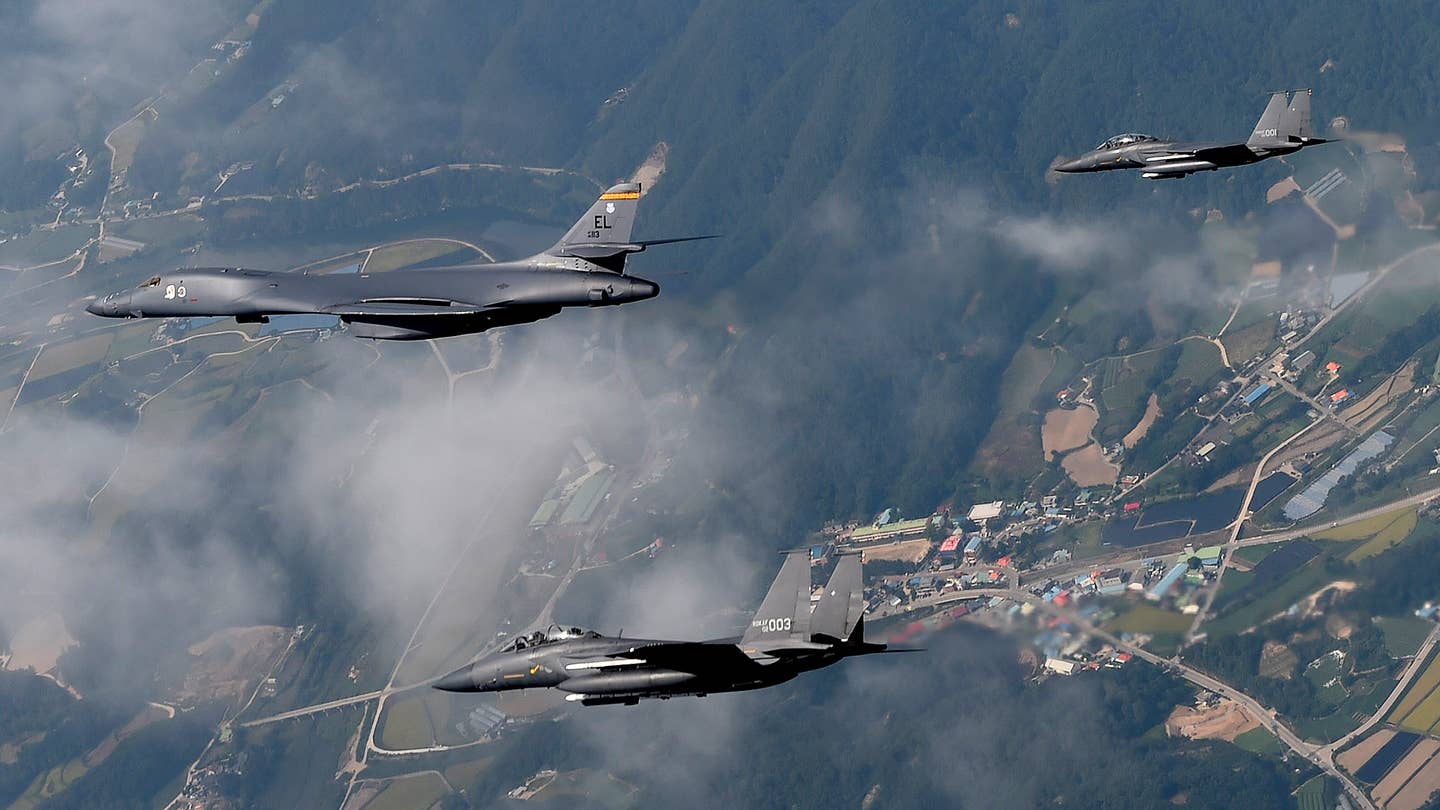 A pair of B-1B bombers were dispatched from their temporary home on Guam to fly closer to the North Korean border than any heavy bomber has flown since the end of the Korean War. The jets even landed at Osan Air Base in South Korea, the first time a B-1B had set down on South Korean soil in two decades. It is unclear how long they will stay in South Korea before heading back to Guam.

The whole affair comes after B-1Bs flew a similar show of force mission over South Korea on September 13th. The mission mirrors those that have occurred for years, usually following a major North Korean provocation, such as a nuclear test or a long-range rocket launch. Lt. Gen. Thomas W. Bergeson, 7th Air Force Commander, describes the aims of the sortie:

“The bond between the United States and the Republic of Korea is ironclad and the strength of that commitment will not be shaken by North Korea’s aggressive behavior. What we are showing today is just one tool we have to choose from a wide array of options. The alliance grows stronger every day and we remain prepared to defend and to preserve the security of the Korean Peninsula and the region.”

Although displaying American and South Korean combat power to the North Korea may have had some effect on Kim Jong Il’s regime, it's had little if any impact on Kim Jong Un’s decision making. Beyond his unchanged pattern of decisions, evidence of this can be seen in the fact that North Korea's normal bluster and outrage over this sort of show of force never surfaced, instead they mocked the September 13 mission, stating: "They are bluffing that B-1Bs are enough for fighting an all-out nuclear war."

The truth is that the North Koreans are right: the B-1B has had no nuclear capability since it was stripped from the jet’s mission profile in the 1990s.

American attempts to up the ante by flying the same aircraft a bit closer to the DMZ, and having them spend some time on the ground at Osan, is more of a sign that the US is running out of ways to deal with Pyongyang than anything else. Kim Jong Un is focused on rapidly developing his nuclear arsenal, and the ability to reliably deliver that arsenal over long distances. Based on this behavior, another air show is probably not going to change his mind, but it does make for some cool pictures.

In fact, North Korean will likely execute another nuclear test in the coming weeks—the third this year—along with more missile test launches. Just this week, a new rocket engine was tested by North Koreans that could revolutionize their long-range rocket capabilities.

The hard truth is that displays of air power will not deter the defiant Kim regime, which has already been targeted by intense sanctions. Only China, which is the Hermit Kingdom’s trade, grain and energy lifeline, has the ability to alter Pyongyang's decision cycle. And so far they have been an unreliable partner in doing so.