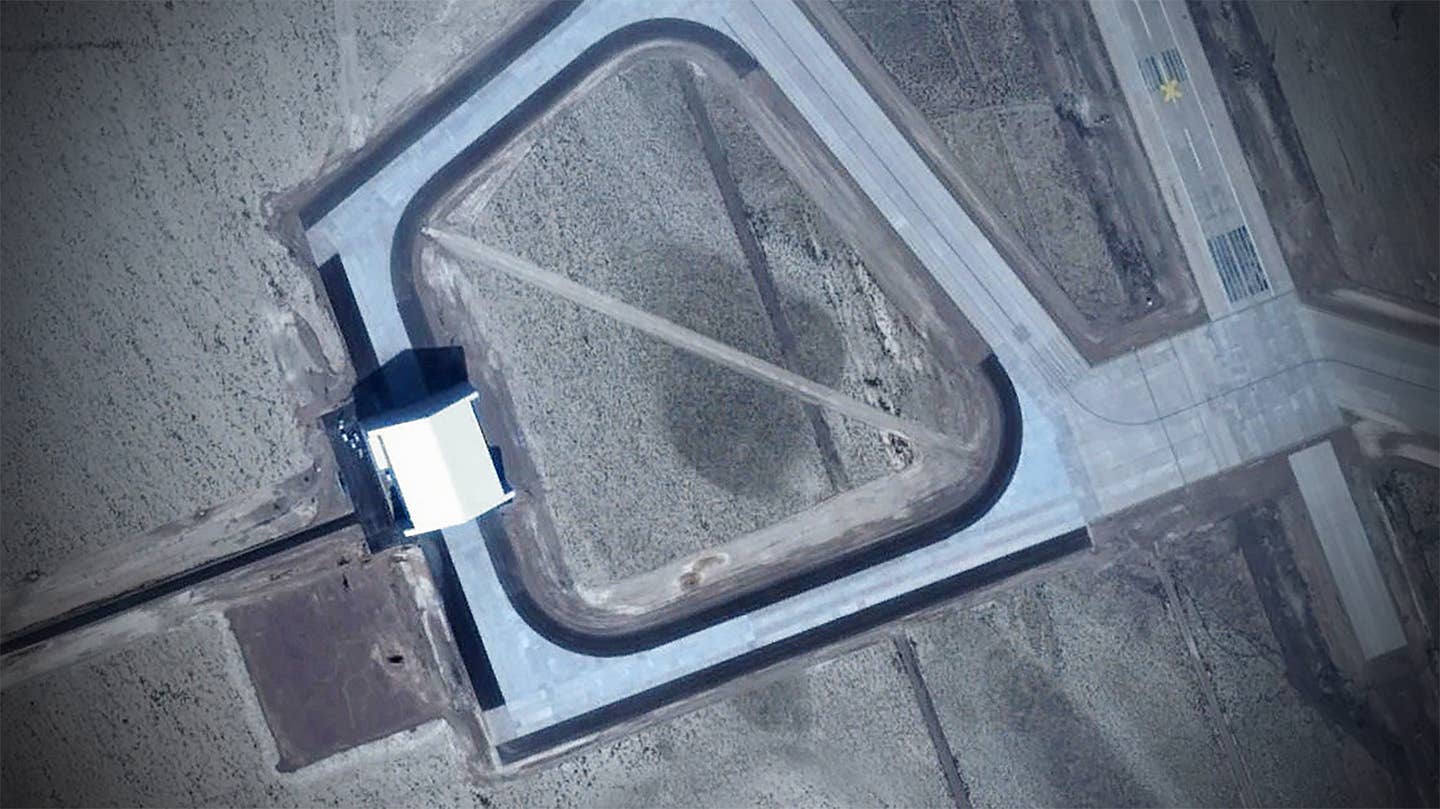 For the first time in half a decade, Google Earth/Google Maps imagery of America’s clandestine flight test center known as Area 51 have been updated. In the new shots, we can see small changes to the ever-expanding base—and one giant one.

I've closely followed the construction of the massive new hangar at the base’s remote southern end, and have speculated on what's inside. In the past, long-range photography by Area 51 watchers and sample imagery from Terraserver have shown the ongoing construction of the big structure. But this Google imagery offers a much more comprehensive and accessible view of the base and its big new feature.

The hangar is 210 feet wide by 250 feet long and very high, and is the largest addition to the base in nearly a decade. In 2006, another large hangar was constructed on the south end of the base’s main ramp facility, complete with an earthen berm built around its south eastern approaches. This facility is known to house Northrop Grumman programs, including a high-flying penetrating spy drone loosely named the RQ-180. Uncharaceristically, the USAF has actually admitted to this program’s existence.

Northrop Grumman likely flew a government-funded next generation stealth bomber proof-of-concept in the later part of the 2000s. The success of this vehicle, and its ability to lower future bomber development risk, spurred the Long-Range Strike Bomber program, which has since been down selected into the Northrop Grumman B-21 Raider. There are also a slew of other rumored past programs and ongoing combat aircraft initiatives from myriad contractors. Each of these could take up space in this and all the other hangars on the base.

The remoteness of this new facility—along with its large size and especially its height—make it a much more curious addition than the 2006 hangar. Is it a massive scoot-and-hide shelter for large aircraft or possibly for a swarm of smaller ones? This seems unlikely due to the quality of its construction and how tall it is. Or was it built so far south due the sensitivity of the program it services? Maybe its location has something to do with the volatile nature of the fuel the aircraft uses?

There are other visible additions to the base compared to the 2011 Google image, including a new engine test cell between the northern ramp and the runways, and a new smaller hangar building near where the chase and test pilot aircraft park.

This new image is a stark reminder of how much the base continues to evolve nearly 60 years after its founding by famed Lockheed Skunk Works boss Kelly Johnson. Although the reality is that the military, and US citizens for that matter, were active on and around Groom lake long before then.

The new Google images also reveal significant growth at the newer test base located at the southern edge of Yucca Dry Lake. The facility, sometimes referred to as Area Six, is thought to test exotic sensors and weapons payloads for unmanned aircraft, and likely has direct ties to the CIA’s drone program. A relatively small new facility is also being built at the northern end of Creech AFB. The base is the epicenter of US Predator and Reaper UAS operations, as well as a known RQ-170 Sentinel operating location.