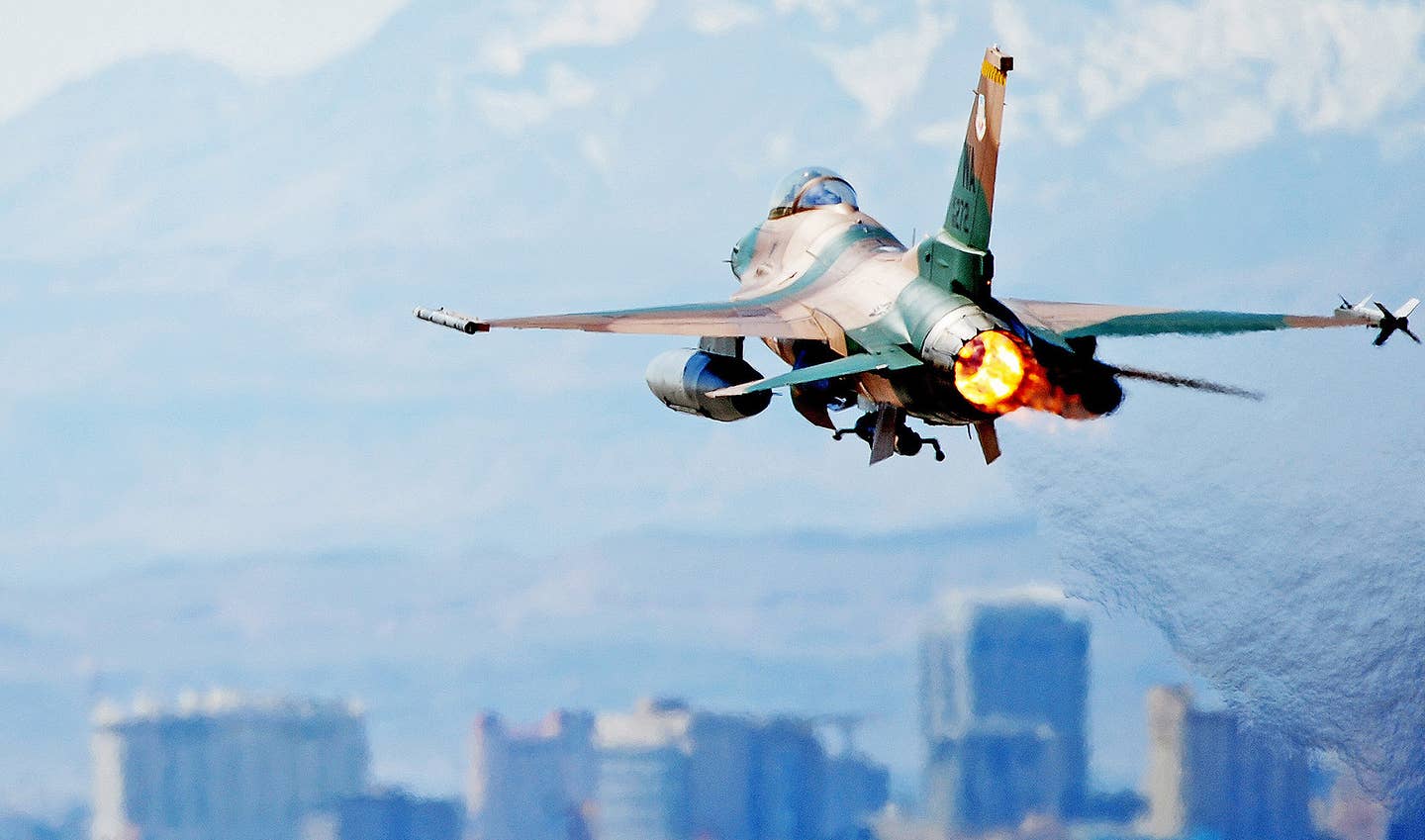 Even though the USAF has shuttered the 65th AGRS based out of Nellis AFB, its only F-15C/D aggressor squadron, our friends at Combat Aircraft Monthly say a new F-16 unit is slated to be activated at the base. This new unit will be made up of eight Block 40 F-16C/Ds, with the squadron envisioned to grow to 16 aircraft as the F-35 comes on line and replaces the Viper in front-line units. The F-16s' mission will reportedly be tightly focused on close air support. Combat Aircraft writes:

“The CAS Integration Group’s mission will include high-end training as well as an increased emphasis on tactical level CAS, with experts to integrate fires in joint operations, advancing the joint CAS enterprise and preserving the USAF ‘CAS culture’. Gen ‘Hawk’ Carlisle, commander of ACC said: ‘The changes we’re making at Nellis are an important step in refining our CAS skills through future generations of Airmen so we can continue to provide ground forces with all the advantages air power brings to close combat.’”

This all sounds good and well. But there are a few tells here that indicate this new unit could be forming to help bolster the case for retiring the USAF’s most underappreciated tactical asset—the A-10 Warthog.

“Preserving the USAF CAS Culture” has been a major issue raised in regards to retiring the A-10; you don’t just retire the plane, you also retire the community that supports it. And that community has been laser-focused on providing extremely high-quality close air support under the most challenging conditions for nearly four decades.

Multi-role fast jets and their aircrews have to accomplish many tasks as well as CAS, and although they are capable of the mission—especially when spooled up for it via intensive training before deployment—America’s CAS "brain trust," so to speak, exists within the A-10 community. If it goes by the wayside, all the experience built up over decades of testing tactics in combat environments will slowly decay. This phenomenon is largely referred to as "brain drain" in Pentagon parlance.

With this and the USAF’s dogged determination to quickly retire the A-10 in mind, moving some of that brain trust over to an F-16 unit gives the impression that the Air Force is trying to check off a box on the Warthog’s death warrant.

Thing is, the USAF has long lusted over the idea of replacing the Warthog with Vipers. The force even went so far as to strap a 30mm cannon pod onto the F-16's centerline, load up the jet with new avionics, paint a batch of them green and stand up a constellation of units to focus on CAS tactics and development. (One of these, in fact, was based at Nellis AFB two and a half decades ago.)

The big gun-toting F-16, dubbed the A-16 and the F/A-16 at various points, failed miserably at its job. The vibration from the cannon was far too much for the “electric jet” to withstand, and accuracy was piss-poor. Even with its cutting-edge technology, the attack Viper simply didn’t hold a candle to an aircraft designed from the ground-up for low-level CAS and battlefield interdiction—and to survive taking one or many hits in the process.

Read all about the A-16 program and how it tried to shoot down the A-10 once and for all in this feature I wrote in 2014.

The announcement of a USAF F-16 squadron dedicated to CAS also comes as the USAF continues to spastically put forward initiatives to replace the A-10—not with the F-35 as it has tried to justify in the past, but now with a pair of ambiguous new platforms. I predicted the Air Force would do exactly this, and I also maintain that all this is just vaporware.

In fact, even after all the USAF’s bluster about a “two platform solution” over the summer and the salivating media carrying the story as fact, Secretary of the Air Force Deborah James proved it is indeed all talk:

"So far I have read about this in the news. I have not actually seen a proposal on any of this that has come forward to me. So it sure is pre-decisional. It hasn't been decided on,” she said. “Where would we get the money? Not at all clear to me.”

The Secretary, who has been very forthcoming about controversial issues that past USAF brass have traditionally “circled the wagons” around, stated there is no money for any of these plans. Flight hours for aircrews are already in the toilet, and the USAF will not be able to afford the tactical aircraft fleet it currently has by 2021 according to their own numbers. (Interestingly enough, 2021 is the same year the USAF plans to sneakily put the A-10 out to pasture.) And on top of that, the Air Force still has multiple big-ticket items in development, many of which are still fiscally unpredictable (B-21, F-35, etc).

The USAF says it cannot even afford the A-10—which it owns outright and has recently upgraded—today. The A-10 is Air Force's cheapest manned tactical asset to operate. So how is it going to be able to afford to develop, procure, and operate a two-aircraft CAS solution? Simple answer: It can’t, unless it wants to give away some very high-profile programs that have missions far more sexy than CAS. Which it won’t.

Now we have reached the point where it seems as if the USAF is willing to build a little time capsule for CAS expertise by standing up an F-16-equipped mini-squadron at Nellis, as if doing so would give the service access to all the CAS lessons learned in the past. News flash: CAS is what the USAF is doing combat-wise today, every day, against an enemy that shows no signs of fading into the history books. The best aircraft for that mission remains the A-10, and the best place for safekeeping of CAS expertise is within the A-10 community—the same place it has been vested successfully for nearly 40 years.