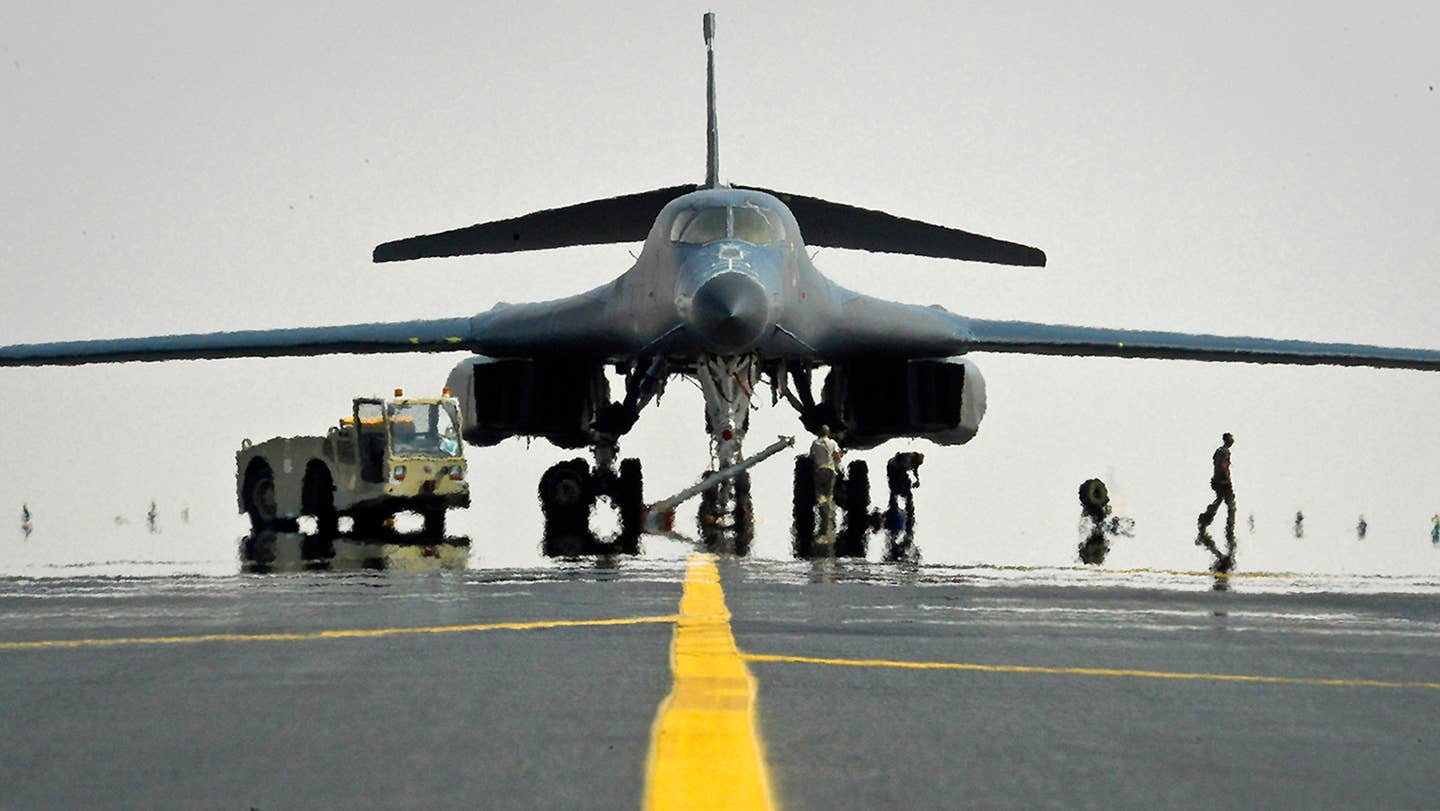 The USAF is deploying B-1B Lancers to Andersen AFB in Guam this August as part of Pacific Command’s continuous bomber presence mission. The big swing-wing bombers will replace B-52Hs that have been fulfilling the mission for months—one of which recently crashed. The odd thing is that the bomber rotations through Guam have been supported exclusively by nuclear-capable bombers—the B-2 and the B-52—bringing an aerial strategic nuclear capability to the theater. The B-1 is strictly a conventional bomber, having lost its nuclear mission in the 1990s.

Just because the B-1 hasn’t been to Guam for 10 years doesn’t mean it hasn't been busy. They have had a persistent presence the Middle East for 15 years straight, until they were replaced by Sniper targeting pod toting B-52s.

The B-1 fleet is undergoing a series of much needed upgrades that will give the big jet greater network connectivity and a glass cockpit, among other enhancements. The B-1 will bring America’s heaviest hitting conventional air-to-ground capability to the Pacific, and its supersonic speeds mean it can cover more distance faster than its nuclear capable stablemates—a big deal in the massive Pacific theater. This issue is often referred to by the Pentagon as the “tyranny of distance.”

The B-1's crewsbring extensive combat experience from Operation Iraqi Freedom, Operation Enduring Freedom, and Operation Inherent Resolve—the fight against ISIS. During anti-iSIS operations, B-1 crews became the all-stars of the conflict, putting the jet to work as a long-endurance close-air support asset with a huge arsenal of diverse weapons.

The maintenance-intensive B-1s will be accompanied by around 300 Airmen from Ellsworth Air Force Base in South Dakota.

With Bones in the region, there is a good chance they will show up in South Korea and Australia, and may even make an appearance over the volatile South China Sea. Rumors of B-1s basing as far forward of Australia have irked the Chinese government in the past, so bringing the B-1 into the mix—even if just for long-range overflights—may be the Pentagon’s next logical step in its ongoing efforts to counter-balance China’s presence in the region.

Since then, China’s own H-6 bombers have been much more active over the disputed body of water. Now that China’s largest man-made island, Fiery Cross Reef, has activated its massive runway, there's a chance these bombers will be regularly rotating in and out of the island outpost.

It's remarkable to see the B-1 in such high demand. The jet was once branded as a plane looking for a mission, a stepchild of the Air Combat Command of sorts, and its future was always questioned. That is certainly not the case anymore, and even a more extensive upgrade, revamping the jet into a true flying arsenal ship is a possibility, although its B-52 stablemate could easily be tapped for the job.

We will keep you updated as to the Bone’s Pacific Theater exploits once it touches down at Andersen AFB this August.