The Y-20’s fascinating method for mixing passengers and cargo was on full display during a recent flight to Shanghai, but it isn’t entirely original. 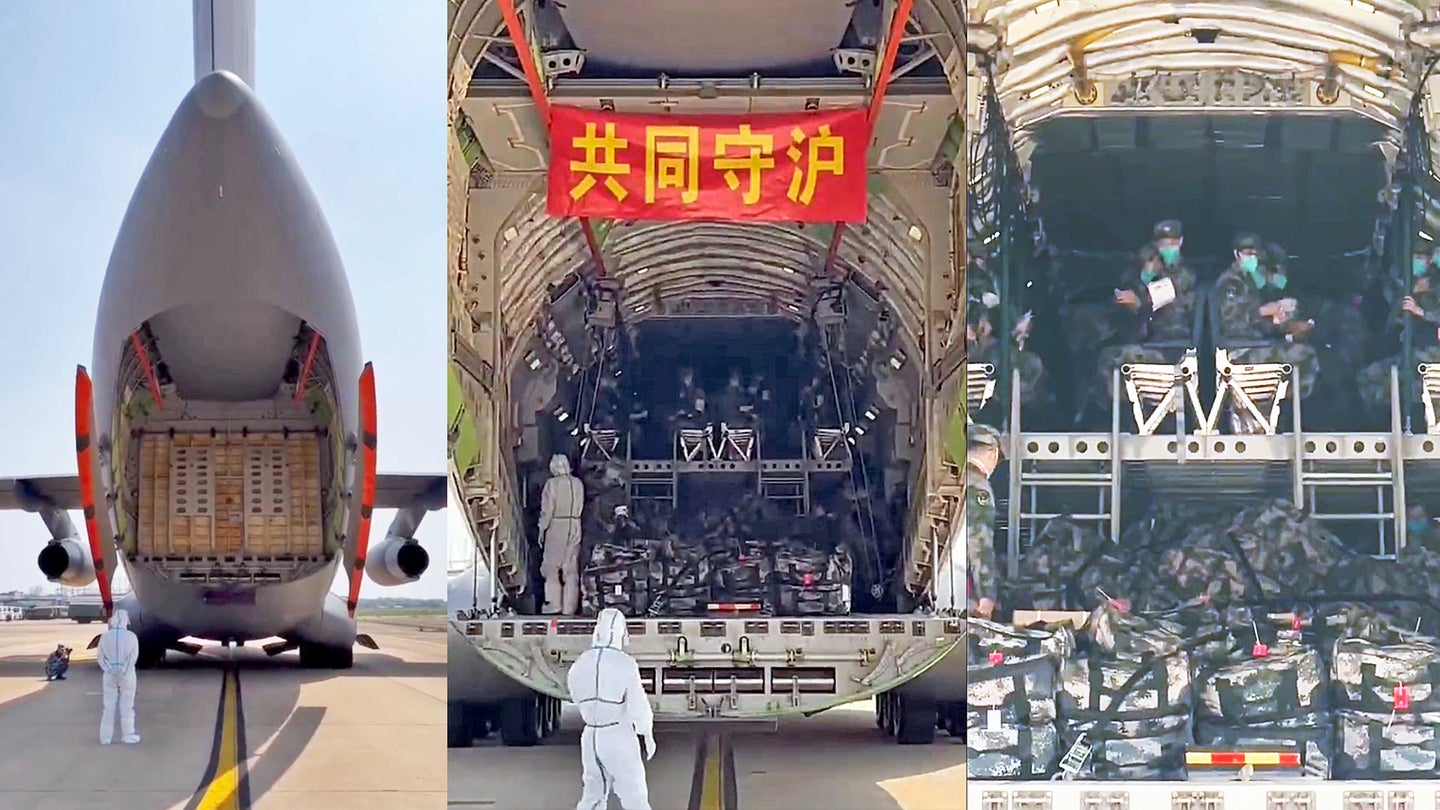 Video footage showing a Chinese Y-20 cargo plane unloading personnel and cargo in Shanghai last week as part of the country's response to the COVID-19 outbreak there has highlighted one of the aircraft's more unusual features. The four-engine military cargo jet can be configured as required with an upper deck with seats for dozens of passengers that allows for cargo to still be loaded underneath. The domestically-produced Y-20 became a bigger topic of discussion this weekend when six of them were tracked online carrying surface-to-air missile systems to Serbia in what was also a major demonstration of the Chinese military's growing strategic airlift capabilities, as you can read more about here.

The video clip of the Y-20 opening its cargo bay at Shanghai Hongqiao International Airport gives an interesting look at the actual airlift capabilities of the design. The aircraft appears to be one of four that touched down in Shanghai last Thursday, where much of the city is under a hard-line lockdown amid surging COVID-19 cases. China's People's Liberation Army Air Force (PLAAF) has been using its Y-20s, the first of which entered service in 2016, in support of responses to outbreaks of the virus since it first emerged in 2020.

In the footage, which emerged on social media last week and is seen in the tweet below, we get to see how the jet's rear cargo bay doors open, with two smaller doors opening to either side before the central section retracts up into the tail. Then a portion of the bottom of the aircraft's rear fuselage, which can form a ramp, drops down.

Another section inside the rear of the cargo bay swings up after the main doors open and the ramp section is lowered. Then we can clearly see the upper passenger deck inside, loaded with troops, along with cargo packed in below.

This is certainly one way to manage mixed loads of troops and cargo inside an airlifter. Many other military cargo planes, such as the U.S.-made C-17A Globemaster III, achieve the same general result through a mixture of passenger seats mounted on the sides of the interior of the main cargo bay and additional seats that can be fitted to the main cargo floor, including palletized types, as necessary. These configurations do lack the space to place another layer of cargo below or above the troops though.

While this seating arrangement surely seems efficient for basic passenger operations, there is no indication that paratroopers can jump from the plane when it is set up like this inside.

The Y-20 is not the only military cargo plane capable of being configured in this way. The Soviet-era Il-76 Candid, which remains in production in Russia, can be fitted with a broadly similar upper passenger deck in the main cargo bay. While we don't know how many people the Y-20's upper deck can seat, 80 passengers can ride on the one for the Il-76 and the Chinese design could well have a similar capacity.

At least one Il-76 configured in this way helped civilians evacuation from Afghanistan in the wake of the Taliban's takeover of the country last year.

Unlike the Y-20's upper deck design, which has a scaffolding-like appearance, the one for the Il-76 is more or less suspended from the cargo bay ceiling via a pair of rails that are typically used for a built-in cargo crane. It would certainly be interesting to know just how crashworthy either the Chinese or the Russian configurations are.

The aforementioned crane is another novel feature that the Candid, among other Soviet airlifters, possesses. This allows for the loading of all sorts of relatively large cargo, including air-droppable armored vehicles, in areas where it might not be possible to use the rear ramp and without the need then for material handling equipment on the ground. In the video of the Y-20 from Shanghai, a pair of rails are also visible along the top of the main cargo bay, indicating it has a similar capability.

Though the Y-20 is most often compared to the U.S. C-17A, the overall design of its cargo bay, right down to how the rear end of the aircraft opens, was clearly heavily influenced by the Il-76, which the PLAAF also operates. China's inability to acquire more Candids reportedly promoted the development of the Y-20 in the first place. So, it's hardly surprising that the Chinese developed a similar upper passenger deck for their domestically-developed airlifter.

As it stands now, the available data indicates that there are at least 43 Y-20s, including a number of dedicated test aircraft and a growing fleet of Y-20U tanker variants, flying today. The Chinese are working toward acquiring more versions that use more efficient, domestically-designed WS-20 turbofan engines instead of the Russian-made Oloviev D-30s found on most of the existing fleet.

With more Y-20s continuing to enter PLAAF service, and the Chinese military increasingly employing them for various types of missions, including the delivery of weapons to foreign customers like Serbia, we are only likely to see more of the aircraft's various capabilities, including its ability to be fitted with this upper passenger deck.

The flight of Y-20 transports reportedly delivered weaponry to Serbia but also served as a demonstration of China’s growing global reach.

A growing fleet of Y-20U tankers will offer a significant boost to China’s long-range air combat capabilities well beyond the Taiwan Strait.