Destroyed Armored Vehicle In Ukraine Gets The “Wolverines!” From ‘Red Dawn’ Treatment

There are certainly parallels to what is going on in Ukraine today and the 1984 film “Red Dawn” beyond the graffiti. 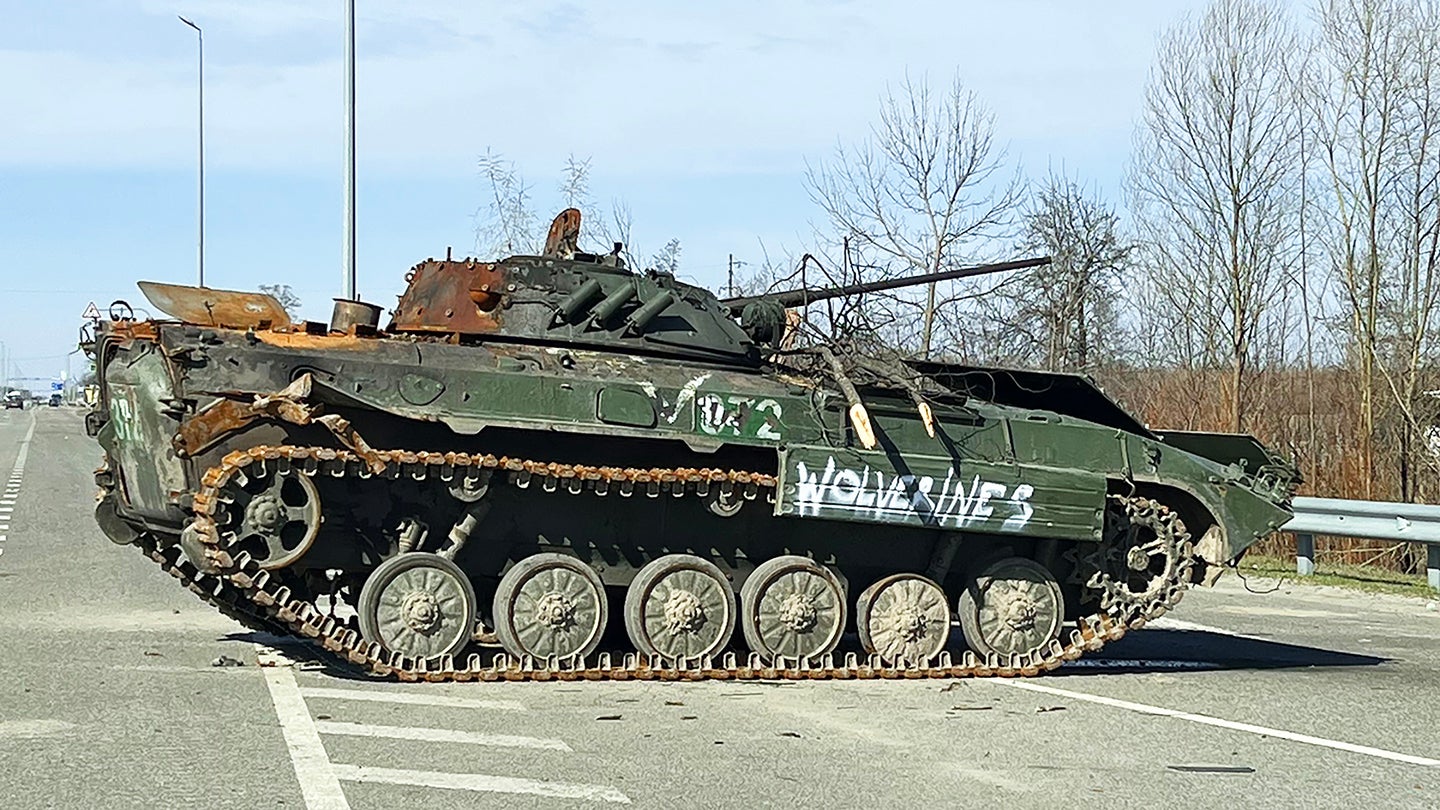 A photo of damaged Russian armor in Ukraine, spray-painted with the word "WOLVERINES" in English, has begun to circulate on Twitter. The image, which readers can see at the top of this post, is a direct callback to the 1984 film "Red Dawn," but the parallels between the photo and the pop-culture hit go beyond just the graffiti.

Scott Detrow, NRP White House correspondent currently covering events in Ukraine on the ground, initially drew attention to the graffitied armor on the morning of April 7th, but was unable to take a clear picture of it. By that afternoon, an image of the armor (verified by Detrow) was provided by Oleg Tolmachev, a U.S. citizen (born in Belarus) who moved to Ukraine in 2020. Tolmachev is the head of production at Naftogaz, a Ukrainian oil and gas company, and has been documenting the impact of Russia's war in Ukraine on social media.

The damaged armor pictured is a BMP-2 Fighting Vehicle, a Soviet-era infantry combat vehicle fielded in the early-1980s. As its main armament, the BMP-2 sports a single 30mm gun in a turret on top of the vehicle. Although the precise location of the BMP remains unknown, Tolmachev confirmed the armor had been spotted somewhere west of Kyiv.

Starring Patrick Swayze, Charlie Sheen, and Lead Thompson, "Red Dawn" centers on a fictional Soviet invasion of the United States (supported by Cuba and Nicaragua.) Playing on fears in the Cold War context of the mid-1980s, the film follows a group of high school students living in Calumet, Colorado, hell-bent on defending their hometown at all costs. The group's high school mascot, a wolverine, provides the name for their insurgent force. In the clip below, readers can see the spray-painted "Wolverine" logo depicted in the film.

In an extended version of the above clip, readers can see the "Wolverine" logo spray-painted onto various enemy military vehicles as depicted in the film (clearly imitated on the damaged BMP-2.)

The cry "Wolverines!" and the crudely spray-painted moniker has become a part of pop culture, often used comedically as a symbol by those resisting a greater power.

Parallels between "Red Dawn" and Russia's present invasion of Ukrainian are obvious for those who have seen the film. It's the bravery, and ultimately the sacrifice, of the resisters to Soviet aggression such as the "Wolverines" who turn the tide of the conflict. Local, everyday people make the difference by taking the fight directly to the Russians.

Of course, we do not know who graffitied the word "WOLVERINES" to the side of the BMP-2 in Ukraine. The film itself was extremely popular worldwide, making $38 million at the box office way back in the mid-1980s and inspiring a 2012 reboot, starring Chris Hemsworth, which traded the Soviets and their allies as the invading forces for North Koreans.

The spray-painted BMP-2 serves as yet another strange sight in a bizarre conflict, albeit one in which the Ukrainians have truly earned the right to call themselves "Wolverines!"