Russian troops are going to ever greater lengths to offset the threat posed to their convoys in Ukraine with crude armor. 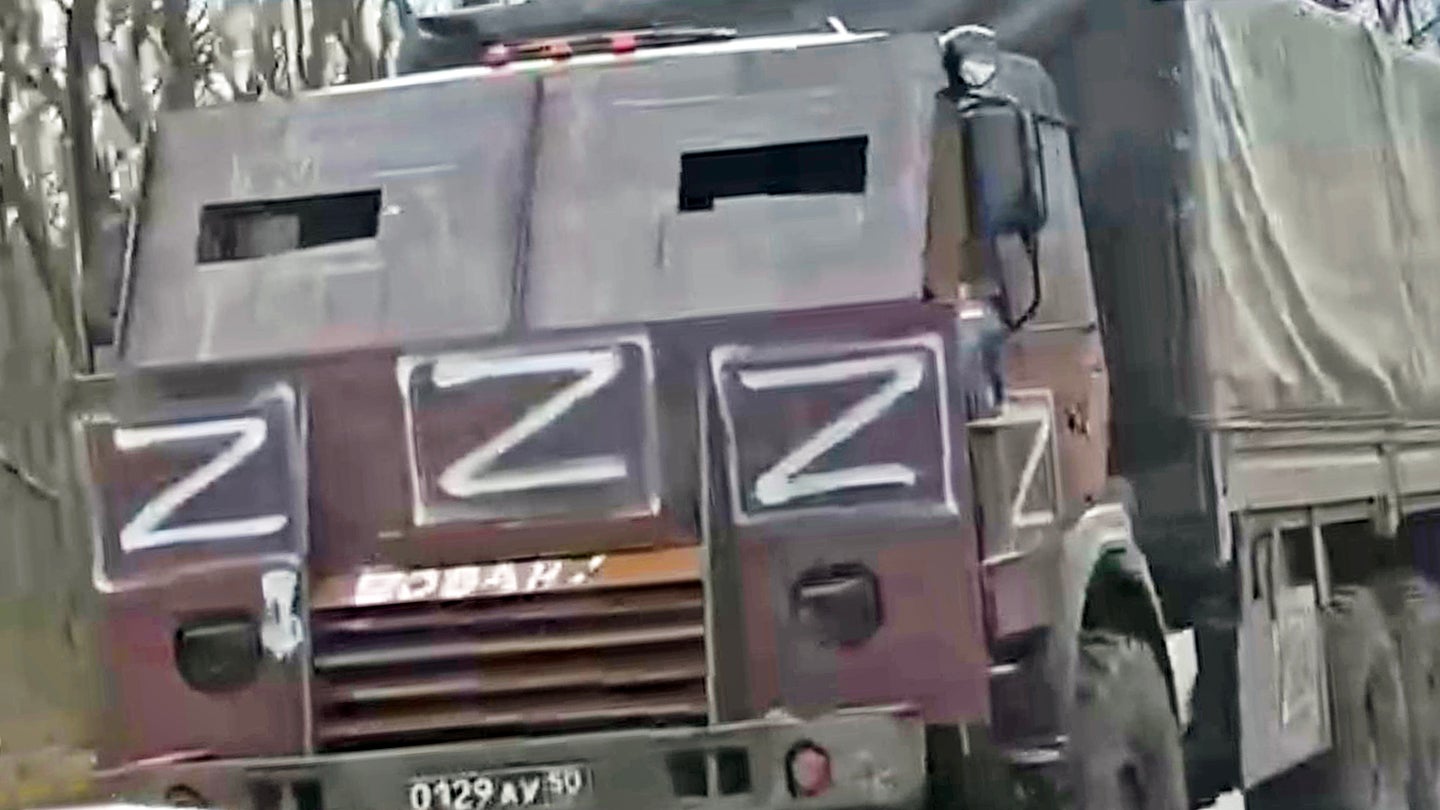 Last month, the Russian military caught the attention, and the curiosity, of observers when examples of its trucks involved in the Ukrainian invasion appeared ‘up-armored’ with wooden logs and scrap metal plates. Since then, however, plenty more examples of vehicles operated by the Russian Armed Forces have been noted with what’s now a much wider range of truly unorthodox, improvised armor modifications, lending these vehicles an increasingly Mad Max-style appearance.

Indeed, these hastily prepared battlefield responses to the threat posed by Ukrainian missiles and artillery share certain similarities with the suicide vehicle-borne improvised explosive devices, or SVBIEDs, that have appeared in recent insurgencies, primarily in the Middle East and Afghanistan.

Dubbed the “artisanal army” by Ukrainian sources, the improvised Russian armor additions have clearly now developed well beyond the stacked lumber previously seen attached to the front of Russian KamAZ trucks, as well as wooden boards and junk metal. The logs were apparently taken from the same forests the trucks were passing through and we surmised at the time that they were intended to protect the trucks’ vulnerable radiators from small arms fire. However, it’s highly questionable whether they would provide any significant protection beyond that.

In one particularly remarkable example sighted earlier this month in northern Ukraine, another KamAZ truck was noted with improvised frontal protection in the form of an apparent transmission cover from an MT-LB armored tracked vehicle. Presumably, the MT-LB had been knocked out or otherwise put out of action, allowing the panel to be recycled in this way.

According to Ukrainian sources, similar reuse of protection from other armored vehicles has also been recorded near Kharkiv.

In addition to these highly improvised examples, there’s now evidence, too, of rather more complex armor ‘body kits’ appearing on Russian trucks, again in the Kharkiv region. This suggests that field workshops are now putting together truck armor based on the actual specifications of the vehicle. These add-ons apparently employ sheets of metal cut to the appropriate shape, with apertures provided for the driver’s vision and for the vehicle headlights.

These kinds of up-armored cabs are very likely more effective than the lumber, boards, and junk metal solutions seen in the recent past, affording an improved degree of protection to the crew in the cab, as well as the engine and transmission. They should, at least, defend against shell splinters and some small-arms fire, although it seems they would not offer much resistance to a direct hit by a heavier weapon.

All in all, these armor kits would seem to reflect the surprising degree of resistance that the Ukrainian Armed Forces has been putting up in the face of the invasion, with Russian vehicles taking a particularly heavy toll. On the other hand, Russian tanks with primitive ‘cage’ type top-attack protection began to appear well before the invasion, suggesting a more recent crash program to provide an improved level of protection even for heavier armor. Either way, the inherent lack of thorough planning seems notable.

At the same time, based on recorded losses, the cage armor, as well as the various truck modifications, do not seem to have been particularly effective when involved in combat, whether exposed to armed drones or anti-tank guided missiles.

This also speaks to the effectiveness of the Ukrainian Armed Forces, of course, with several examples of smaller defending forces achieving multiple kills against numerically superior opposition. The Ukrainians have also had success with anti-convoy tactics, using ambushes and well-placed weaponry to decimate inflexible formations of Russian vehicles, both armored and soft-skinned. By turning road networks into killing grounds, the effect on the Russian logistics trail has clearly been felt, most notably with the major convoy outside Kyiv having been repulsed.

The continued flow of heavy weaponry in support of the Ukraine military is only likely to increase the threat to Russian vehicles, soft-skinned or otherwise, and it’s more than likely that we will continue to see creative efforts made by the invasion forces to try and improve their chances of survival.