The previously unknown Modular Advanced Missile is the latest addition to a growing collection of in-development air dominance missiles. 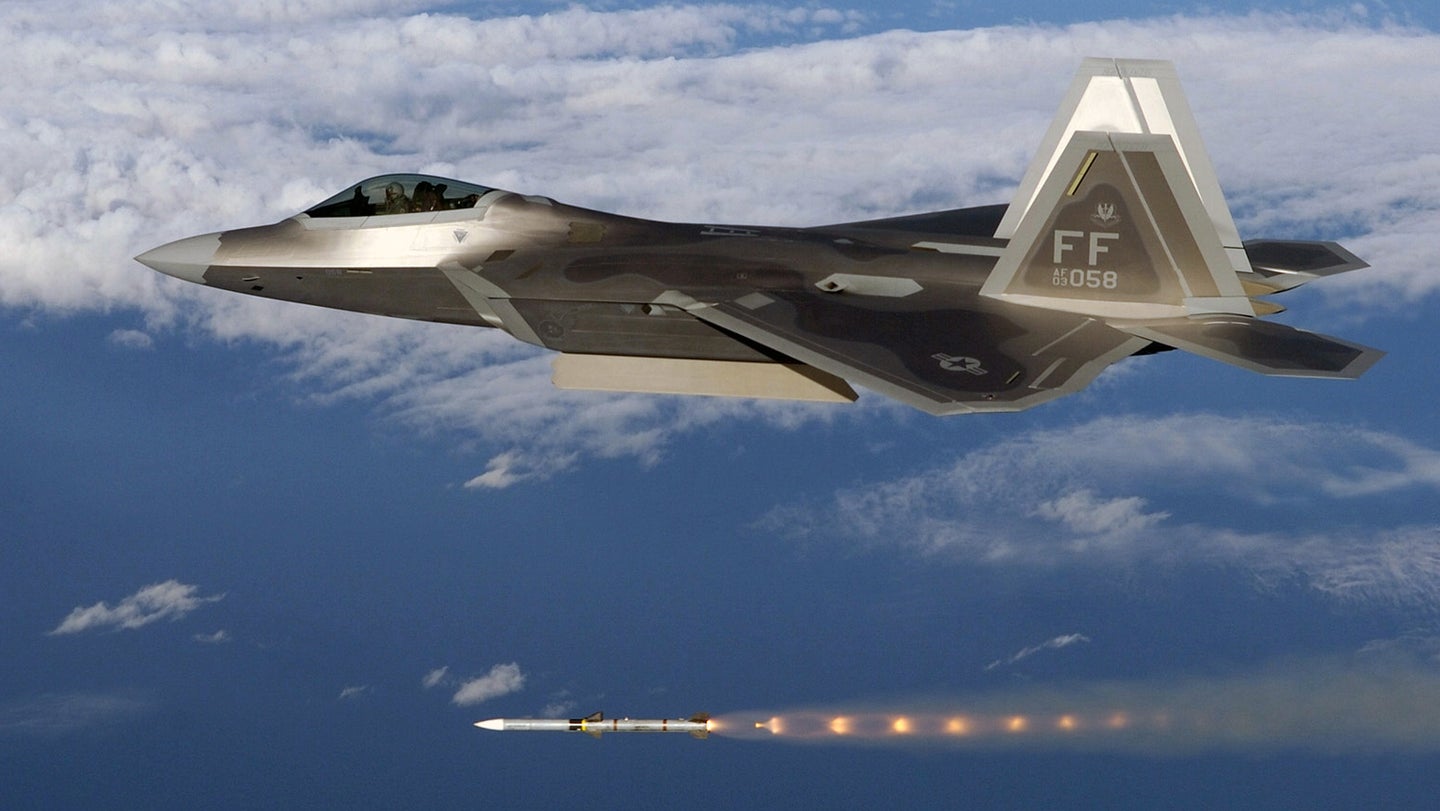 A new program appears to have been added to the relative flurry of activity in the field of next-generation air-to-air missiles, or AAMs, for the U.S. military. While very little is known about the Modular Advanced Missile, reference to which first appeared in a recent Air Force budget document, we now know that the weapon is an AAM and that there are plans to test-fire it from a fighter jet. The Modular Advanced Missile joins several other developmental AAM programs, most of which stress long-range capability, although at this stage we have no idea what range category this new weapon will fit into.

However, some important new details about the Modular Advanced Missile have been obtained by Steve Trimble, Aviation Week’s Defense Editor, and a friend of The War Zone. As well as confirming that the weapon is an AAM, these include the fact that “a kinematic demonstration from a fighter,” in other words, a live test launch, is planned at some point in the future.

The first reference to the Modular Advanced Missile came last week, when the Air Force Research, Development, Test, and Evaluation Appropriations (RDT&E) budget request for the 2023 Fiscal Year was published. You can read more about some of the key developments in the Pentagon’s budget request, worth $773 billion in total, here.

Critical information that we don’t yet have is what class the missile is in: it could be a short-range dogfighting weapon (least likely), a medium-range weapon in the class of the AIM-120 AMRAAM, a long- or very-long-range weapon of a kind not currently used by the Air Force, or perhaps some hybrid. There are no details of seeker type, propulsion, or anticipated performance, any of which would likely give a hint in this direction.

However, the use of the term “modular” in the program name is also interesting and may point to some kind of option to swap out boosters, warheads, and seekers, or at least some of those items, adapting the basic missile for different missions and platforms. The ability to field different seekers on the same air-to-air missile is something that’s been pursued by France and Russia, for example. The last operational American AAM to offer this seeker modularity was the Falcon series, back in the 1950s.

It would be a highly beneficial attribute for a new AAM, with a long-range infrared-guided missile offering particular advantages, including passive engagement (no or little electromagnetic emissions) of aerial threats at considerable distances and being largely impervious to RF jamming. Advances in data-link technology have made long-range infrared-guided missiles more attractive, as well, allowing for third-party sensors to provide initial and mid-course targeting updates over long ranges. This can allow even its launching platform to remain passive, as well.

A modular type of rocket motor or booster section could also be attractive to the Air Force. That would enable the fielding of different-sized weapons. For example, AMRAAM-scaled missiles to fit the internal bays of F-35 and F-22 fighters or a much larger, extremely long-range version carried by larger future aircraft, like the B-21 Raider. Even two of a smaller type with no extra booster or a shorter rocket motor could potentially fit in the space of a single AMRAAM.

Notably, the idea of a missile with modular architecture has been present in various previous concepts and past developments. For example, two long-range AAM programs in the works appear to lend themselves, particularly, to modular architecture, including Raytheon’s Long Range Engagement Weapon (LREW). Details of LREW remain extremely scarce, but it seems that a notional LREW missile booster could potentially be sized up or down depending on the limitations of the aircraft carrying it.

Boeing, too, has a conceptual contender in the long-range AAM field, with its two-stage Long-Range Air-to-Air Missile, or LRAAM, which you can read about here, and which could also lend itself to a modular architecture. As we discussed at the time, the LRAAM would seem to offer the possibility of using the front section by itself as a weapon for shorter-range engagements. It's possible that two of the single-stage versions could fit in the same space as one of the two-stage versions, offering great flexibility, especially for internal carriage.

Overall, being able to equip a new AAM with different seekers, warhead or no warhead (or perhaps different types of warheads), and different motor sections to fit different applications would be something akin to a 'holy grail' of air-to-air missile technology and would drastically improve upgradability and adaptability. The result would essentially offer a wider menu of AAMs for different types of engagements and platforms, but with common components that would help drive down costs and reduce logistics demands.

For now, however, we are essentially left with further confirmation that the Air Force is looking seriously at overhauling its current AAM inventory, dominated by the AMRAAM, of which increasingly long-range and more capable versions are being tested, as well as the short-range AIM-9 Sidewinder family. The latter includes the latest AIM-9X, a weapon that also appears to be heading toward being an intermediate-range missile.

Beyond these weapons, we know that the U.S. military and industry are working on at least one other all-new design, namely the Lockheed Martin AIM-260 Joint Advanced Tactical Missile, or JATM, which could begin to be fielded on Air Force and Navy aircraft before the end of this year, although it will be likely some time before it’s declared fully operational.

In what’s become a common theme in these programs, the JATM is expected to hit targets at a greater distance than the AIM-120, helping at least match the performance of the latest Chinese and Russian very long-range air-to-air missiles. With extensive testing already undertaken for JATM, this would seem a less likely candidate for RDT&E work in FY23, however.

All these are almost certainly optimized for the kind of high-end aerial combat that would be expected if the United States and its allies were ever to go to war with China or Russia. The fact that they prioritize longer-range capabilities not only to wanting to get the most out of more capable new fighter radars and networking capabilities, but also the need to gain an advantage over potential threat weapons like the Chinese PL-15 and the Russian R-37M.

Then there is the Peregrine, another Raytheon design, a new medium-range missile that combines superior performance as well as small size, which could effectively double the number of missiles that fighters such as the F-35 or F-22 can carry internally. By developing a missile that’s roughly half the size of the AMRAAM, the Peregrine should allow low-observable fighters like these to increase their ‘magazine capacity,’ while retaining their stealthy characteristics.

A similar miniaturized beyond-visual-range air-to-air missile, Lockheed Martin’s Cuda, was promoted in the early 2010s, though more recently it seems to have largely disappeared from the company’s marketing.

It’s understood that Cuda was to have a shorter range than the AMRAAM and would utilize a hit-to-kill design, eliminating the traditional warhead to allow more space for fuel.

While the Cuda program has gone quiet, there’s no indication that it’s not still active and in 2019 the Air Force Research Laboratory (AFRL) disclosed that the Air Force had allocated funding to a flight demonstration program for the missile. According to reports at the time, these tests would focus on “range and terminal-phase maneuverability when compared to the AIM-120D.”

At this point, we simply don’t know if any of the aforementioned missiles could also be involved in this new program. By the same token, the requested RDT&E funding may be for trials of something entirely different, a program that is much more secretive.

Last year, the Air Force again referred to the fact it’s working on a new very long-range air-to-air missile, with the F-15EX fighter jet earmarked as the most likely candidate to carry it. The service made reference to an unnamed “outsize … air-to-air” weapon, while the F-15EX was described as “an outsized weapons truck.” Potentially, the Modular Advanced Missile could be this weapon, too.

Although the Air Force plans to test its new missile from a fighter jet, there’s also the possibility that the weapon in question will ultimately also end up arming unmanned platforms, too. The LongShot program involves a missile-carrying air-to-air combat drone that is being developed by General Atomics Aeronautical Systems (GA-ASI), Northrop Grumman, and Lockheed Martin. The idea is for the unmanned aircraft to be launched in mid-air from a manned aircraft before flying into potentially more hazardous environments and engaging aerial threats using its own missiles. In the past, we have suggested that any one or more of the JATM, Cuda, or Peregrine, as well as AMRAAM, could be suitable armament for LongShot.

Whatever the case, it appears the Air Force is set on testing new air-to-air weapons to follow on from its current AMRAAM and the apparently soon-to-be-delivered JATM.

Even before Russia’s invasion of Ukraine, the need for new air dominance weapons had become clear, especially with an eye on China and fears that it could invade Taiwan before the end of this decade.

In such a scenario, the United States and regional allies would be hard-pressed to counter the People’s Liberation Army over the Taiwan Strait, especially bearing in mind predictions that the latest Chinese AAMs can outrange the weapons carried by the latest U.S. fighters.

Now, the frenetic air war being fought between Russian and Ukrainian fighters has only reinforced the reality that air battles of this kind, with extensive use of air-to-air missiles, are very much still a part of modern aerial combat.

We will continue to follow developments related to this intriguing program and report on significant new details as they emerge.

LongShot is an initiative to give combat aircraft their own drone able to fly out and engage enemy aircraft over long distances with its own missiles.