Russia’s war in Ukraine is in the midst of a major shift in focus after five weeks of fighting. 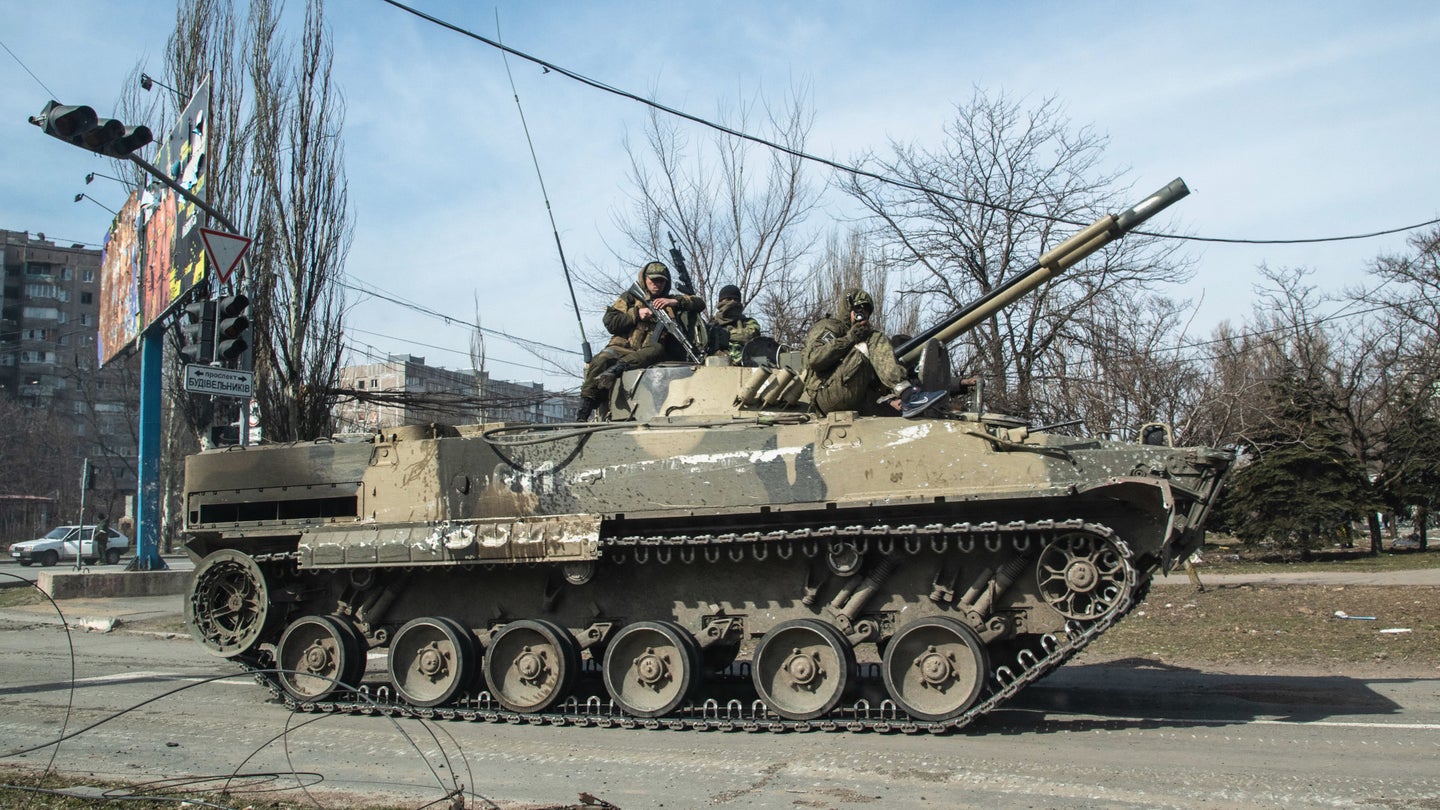 Russia's war in Ukraine is now five weeks old and the conflict is now shifting in significant ways. NATO says that it is indeed seeing a drawdown of Russian forces in northern Ukraine, but that this is geared toward repositioning those units to support its offensive in the country's eastern Donbas region rather than an actual withdrawal.

This is all in line with recent statements from Russian officials about refocusing the "special military operation" in Ukraine on securing the Donbas. This seems increasingly likely to be a prelude to an attempt to bifurcate the country, if not to annex additional Ukrainian territory outright.

Since the invasion began on February 24, Russian forces have made their most significant advances in the southwestern end of Ukraine. Over the past five weeks, Russia's security services, bolstered by Russian-backed separatists and mercenaries from an ostensibly private company known as Wagner, which has strong ties to Russian intelligence agencies, have been working to solidify those gains. This includes the ongoing push to capture the strategic port city of Mariupol on the Sea of Azov, which will help the Russian military secure a vital land bridge to the occupied Crimean Peninsula via the Donbas.

Our preceding rolling coverage of the ongoing conflict in Ukraine, where The War Zone readers can get fully up to speed on what has already been happening, can be found here.

"According to our intelligence, Russian units are not withdrawing, but repositioning. Russia is trying to regroup, resupply, and reinforce its offensive in the Donbas region," NATO Secretary-General Jens Stoltenberg said today. "At the same time, Russia maintains pressure on Kyiv and other cities. So, we can expect additional offensive actions, bringing even more suffering."

This repositioning has included the movement of Russian units out of Ukraine and into Belarus via the site of the now-defunct Chernobyl Nuclear Power Plant and the surrounding Exclusion Zone that was established after the disaster there in 1986. There are indications that Russian forces will leave the area entirely, though this has not yet happened. There are unconfirmed reports that some Russian troops may have suffered adverse health impacts from exposure to radioactive contamination while operating in this area, or at least experienced some degree of severe anxiety regarding potential exposure, which may have led to some breakdowns in unit cohesion.

Even with these repositionings, significant numbers of Russian units still remain in place in northern Ukraine. The U.S. military has assessed that only around 20 percent of Russian forces arrayed around the Ukrainian capital Kyiv have been ordered away.

Russia's military has already been under increasing pressure from Ukrainian counterattacks in the northeastern end of the country. At the same time, Russian forces continue to be able to carry out stand-off artillery and missile strikes targeting various cities in this same general region. The U.K. Ministry of Defence has said it expects to see heavy fighting continue in many of these areas in the coming days. The U.S. military said today that Russian forces have fired at least 1,400 cruise and ballistic missiles at Ukrainian targets in the course of the conflict so far and have conducted more than 300 combat aviation sorties over the country in the past 24 hours, including air operations in the vicinity of Kyiv.

The U.S. military says that Russia has very likely completely abandoned its attempts to seize Hostomel (Gostomel) Airport outside Kyiv, which had been a major objective from the very start of the invasion. Russian and Ukrainian forces had been fighting a back-and-forth battle over the airfield, which sustained significant damage as a result, including the destruction of the sole flying example of the An-225 Mriya cargo plane, one of the largest aircraft ever built.

There are indications that Russia is already stepping up operations in the Donbas region as part of this apparent shift in focus. A senior U.S. defense official said today that there had been a spike in Russian airstrikes in this part of Ukraine and that there were concerns that increased fighting there could drag out the conflict as a whole.

Within the Donbas, Mariupol remains a major objective for Russian forces. British authorities, among others, are still stressing that the center of this strategic southern port city remains outside of Russian control, despite having been subjected to an absolutely devastating siege for weeks now. At the same time, separatists are reportedly moving to create a parallel administration in the city.

At least one Ukrainian Mi-8/Mi-17 Hip-type helicopter was reportedly shot down while leaving the Mariupol area, possibly while trying to retrieve wounded personnel. A number of African national flag patches were recovered from the wreckage suggesting that this helicopter, or members of its crew, had at one time been involved in United Nations peacekeeping efforts on the continent.

In the meantime, more civilians are evacuating the city as part of a humanitarian effort that the Red Cross is now involved in to some degree. Local Ukrainian authorities in Mariupol believe that at least 5,000 civilians have died as a result of the siege so far.

The British government has now sanctioned Russian Col. Gen. Mikhail Mizintsev over the bombarding of civilian areas of Mariupol.

Russia continues to blockade Ukraine's strategic Black Sea port city of Odesa in the southwestern end of the country, according to a senior U.S. defense official. There continue to be sightings of Russian warships in that general area, including via satellite imagery, but whether or not Russia is planning to conduct an amphibious operation as part of a larger offensive in this part of Ukraine remains unclear.

Amid the increase in Russian airstrikes, The Washington Post has published an op-ed that says the U.S. government is continuing to work with Slovakia regarding the potential transfer of its Soviet-era S-300 long-range surface-to-air missile systems to Ukraine. However, that process has been dragging on in part because of U.S. officials trying to determine whether sending this system would present overly significant risks of escalation in tensions between NATO and Russia. American authorities cited similar concerns as being among the issues that have, at least so far, scuttled attempts to send Polish MiG-29 Fulcrum fighter jets to the Ukrainian Air Force. The U.S. military has already facilitated the delivery of spare S-300 parts to Ukraine.

The pictures below reportedly show a transporter-erector-launcher associated with one of Ukraine's S-300PS systems that Russian forces have captured.

The British government has now announced its own plans to transfer armored vehicles and artillery to the Ukrainian armored forces. It's not immediately clear what systems will be sent, but tanks will reportedly not be among them.

The U.S. government continues to believe that Russian President Vladimir Putin is not getting an accurate picture of the state of operations in Ukraine from his advisors, according to a senior defense official. This comes amid continued reports that Russian units are suffering from flagging morale, poor unit cohesion, logistical issues, and other problems after more than a month of fighting. Separately, the Russian government announced the next round of routine conscription in the country's armed forces, but has insisted that none of these individuals will be sent to fight in Ukraine.

In a speech in Australia today, Sir Jeremy Fleming, head of the British General Communications Headquarters (GCHQ), the country's analog to the U.S. National Security Agency (NSA), offered additional insights into how badly the Russian government appears to have misjudged the prospects for its invasion and how poorly Russian forces have been performing so far. “We’ve seen Russian soldiers — short of weapons and morale — refusing to carry out orders, sabotaging their own equipment, and even accidentally shooting down their own aircraft,” he said.

The pictures below show trucks either belonging to Russian forces or Russian-backed separatists with improvised add-on armor on the front, especially around the cabs and radiators. This is similar to other up-armoring efforts that have been observed already, which have come as anti-tank missiles and other shoulder-fired anti-armor weapons continue to pour into Ukraine, as you can read more about here.

In a new interview, Ivan Fedorov, who had been the Ukrainian mayor of the southern city of Melitopol until his abduction by Russian forces earlier this month, said his captors appeared clueless and unprepared, regurgitating propaganda talking points when asked about the reasons for the invasion. Ukrainian forces freed Fedorov two weeks ago.

Italian Prime Minister Mario Draghi has said that both Russia and Ukraine have asked his country to be a guarantor of a future negotiated settlement to the conflict. However, Draghi also said that Russian President Vladimir Putin recently told him that the time was not right for a ceasefire.

Italian authorities have also said that Russia remains open to accepting payments for oil and gas shipments in euros and dollars, despite an announcement from Putin today that, starting tomorrow, the only acceptable currency will be rubles. The French and German governments have both said that they will not be able to pay their bills in Russia's national currency.

NATO member Denmark says that the alliance has asked it to deploy 800 troops as part of the ongoing effort to bolster security along its eastern periphery. The Danish parliament will have to approve any such deployment.

France's top military intelligence officer, Gen. Eric Vidaud, is reportedly stepping down after effectively being fired over assessments leading up to the Russian invasion of Ukraine that reportedly said such a scenario was unlikely. However, sources told AFP that Vidaud did accurately explain to senior French officials ahead of the conflict that the Russian military had the capacity to launch an invasion if it chose to.

The video below shows civilian vehicles navigating anti-tank mines placed on a road in a suburb of Kyiv.

There are reports that authorities in Kyiv are about to lift a ban on the sale of alcohol.