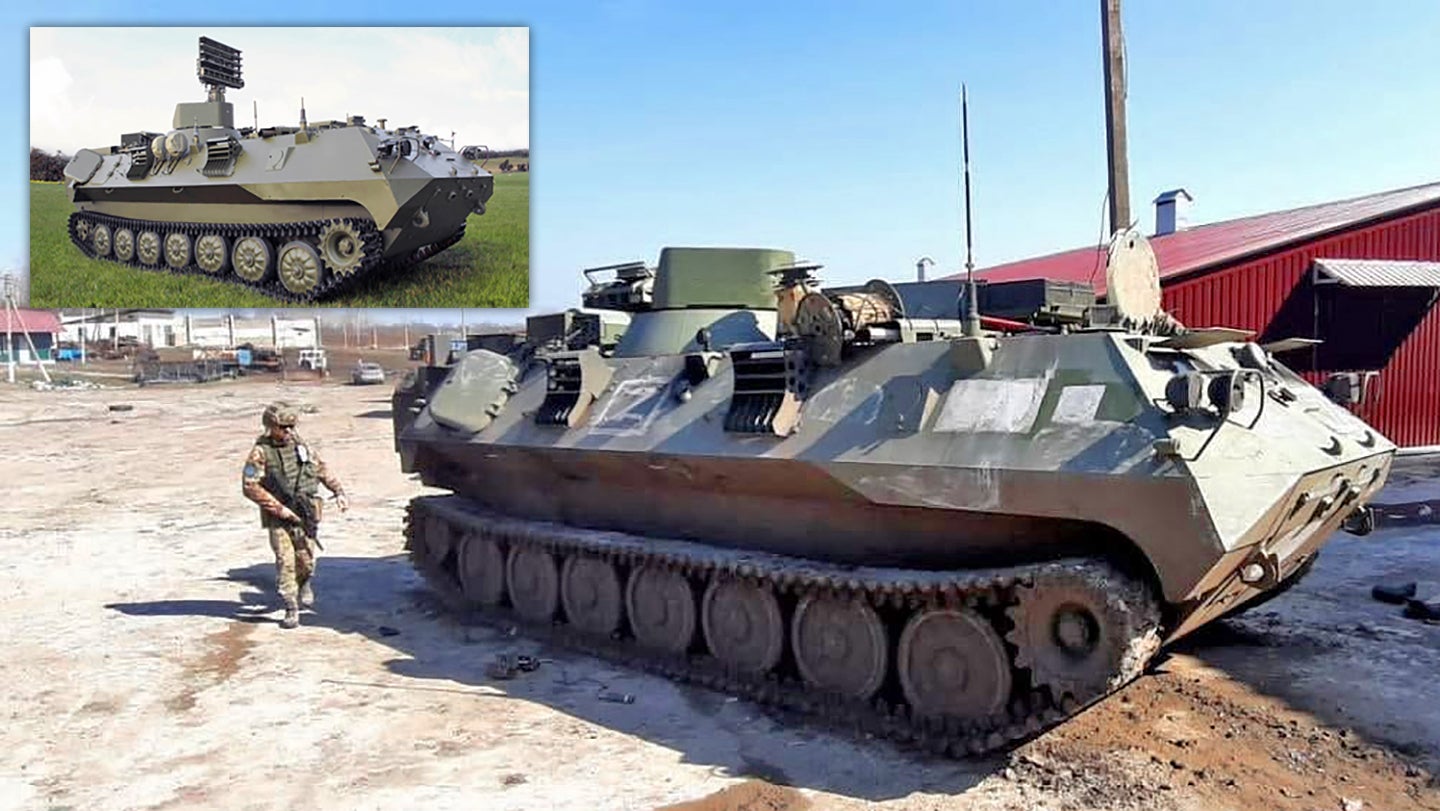 Ukrainian forces continue to capture, or at least stumble across, examples of some of Russia's most sophisticated ground combat hardware as the conflict in the country rages on. Just this past weekend, pictures emerged online showing a Russian radar-equipped air defense command post vehicle, part of a larger system known as Barnaul-T, that Ukrainian troops found during a counteroffensive in the northeastern Kharkiv region. The fact that this vehicle is intended to serve as a sensor, command and control, and communications node all rolled into one could make it a particularly invaluable source of intelligence for Ukrainian and foreign governments, as well as be a significant operational loss for Russian forces.

A Ukrainian unit reportedly found this vehicle relatively intact, also known by the nomenclature 9S932-1 and the acronym MRU-B, among other Russian vehicles and artillery pieces, in the town of Husarivka. The 9S932-1 is most readily identifiable by its 1L122 surveillance and target acquisition radar, which is mounted on the top rear portion of the hull and is folded down during transit. There was also a TZM-T dedicated reloading vehicle for the TOS-1A thermobaric artillery rocket launch system, another uncommon find.

Ukrainian forces appear to come across at least three examples of this particular component of the Barnaul-T system in the course of what has now been nearly five weeks of fighting. What looks to have been a second 9S932-1 was found in relatively good condition in the Kharkiv region sometime around March 12. A third one was captured near the capital Kyiv on or about March 3 and was apparently so pristine that it was then pressed into Ukrainian service in an unclear capacity.

Barnaul-T, as a complete system, which first began to enter Russian service in 2009 and is said to have reached an initial operational capability by 2011, is designed to network together various short-range air defense (SHORAD) systems and be mobile enough to work closely together with advancing ground forces. It is reportedly a very modern and highly automated system intended to enhance the ability of air defense forces to rapidly spot and engage a variety of threats across an entire section of the battlespace.

Elements of the Barnaul-T system have been in use in fighting in Ukraine since at least 2015. Examples of the 9S932-1 specifically have been seen operating in the country since the Russian military launched its all-out invasion of the country in February.

The Russian-language graphic below depicts a typical Barnaul-T system that includes six 9S932-1s, seen in a row near the bottom linked to different SHORAD systems, among other components.

Additional equipment is necessary in certain cases to link the 9S932-1s to different SHORAD systems. As just one example, the 9K333 Verba uses an add-on system known as the 9S935 to connect it to the broader Barnaul-T network via a standalone 9S933 fire control module at the platoon level.

The video below provides an overview of the complete Verba system, including the 9S933 and 9S935.

Just today, a video emerged that reportedly shows a 9S935 system still neatly packed in its transit case after its capture by Ukrainian forces.

Thanks to their integrated 1L122 radars, 9S932-1s can provide direct target cueing for the SHORAD systems they are tied to via datalinks. They can also pass along targeting information from other ground-based radars via other mobile command posts within the Barnaul-T system, such as the intermediate 9S931 MP tracked and 9S931-1 MP-K wheeled types, at higher echelons. They can feed their own data back into the overall network, as well.

It's worth noting that there are now multiple versions of the Barnaul-T system that use other mixtures of command post vehicles, including variants based on the BTR-MDM, an air-droppable multi-purpose tracked vehicle, specifically for airborne units.

From an immediate operational perspective, Ukrainian forces capturing or otherwise eliminating 9S932-1s, or any other component of the Barnaul-T system, can only limit the ability of their Russian opponents to provide effective air defense coverage for their units. Neutralizing Russian ground-based air defense capabilities has been one important component of the Ukrainian armed forces' successful efforts to ensure that the skies above the country remain contested, even after more than four weeks of fighting.

More importantly, captured 9S932-1s and other elements of the Barnaul-T are certainly an invaluable source of intelligence on Russian air defense systems, radars, data links, and more. Just being able to test the capabilities of the 1L122 radar would provide useful insights into the ability of Russia's short-range air defense networks to spot and engage a variety of threats, including small drones. Acquiring detailed data on this radar's specific signature could help when it comes to developing capabilities to detect and counter them, as well.

Beyond the radar, these vehicles carry various communications and data-sharing systems, and what could be gleaned about how data is encoded and transferred from the software that runs them could be just as valuable, if not more so, than what one might be able to learn from physical components themselves. A vehicle like this could also contain coded identification friend or foe (IFF) data that Russian forces use to help avoid accidentally targeting friendly aircraft. All of this information could be exploited for both electronic and cyber warfare purposes.

At the same time, the physical construction of portions of these mobile command posts, right down to things like the wiring, could be a source of useful industrial intelligence. Any documents or other ancillary items found inside them could provide additional insights into Russian capabilities and operating procedures.

With all this in mind, the Ukrainian government's international partners, such as the United States, are likely to be interested in at least examing these mobile air defense command posts, if not taking complete examples out of the country for deeper analysis, as part of so-called foreign materiel exploitation (FME) programs. Of course, American and other foreign intelligence agencies may have already gained access to 9S932-1s captured in Ukraine, or through other, unrelated means.

Regardless, the current war in Ukraine is already leaving the country with a treasure trove of examples of some of Russia's most advanced equipment, not just the 9S932-1s. Earlier this month, Ukrainian forces captured part of a Krasukha-4, one of Russia's most modern and capable electronic warfare systems, as you can read more about here. Elements of Ukraine's armed forces have captured multiple vehicles associated with the Borisoglebsk-2, another mobile electronic warfare system, and at least one Zoopark-1M, a mobile counter-battery radar used to detect incoming artillery fire and determine its source for counterattacks.

Since it gained independence from the Soviet Union in 1991, Ukraine has already been a notable source of higher-end systems, from fighter jets to ground-based air defense radars, for the U.S. government's FME enterprise. Some of those systems may well now be headed back to Ukraine, as the U.S. military digs into its FME stocks to find systems to help bolster Ukraine's own air defense capabilities, as you can find out more about here.

Altogether, for every system like the 9S932-1 that Ukrainian forces capture, they are not only hampering Russian forces' ability to operate in the country, they are also potentially exposing new details and providing new insights about some of their most advanced capabilities.