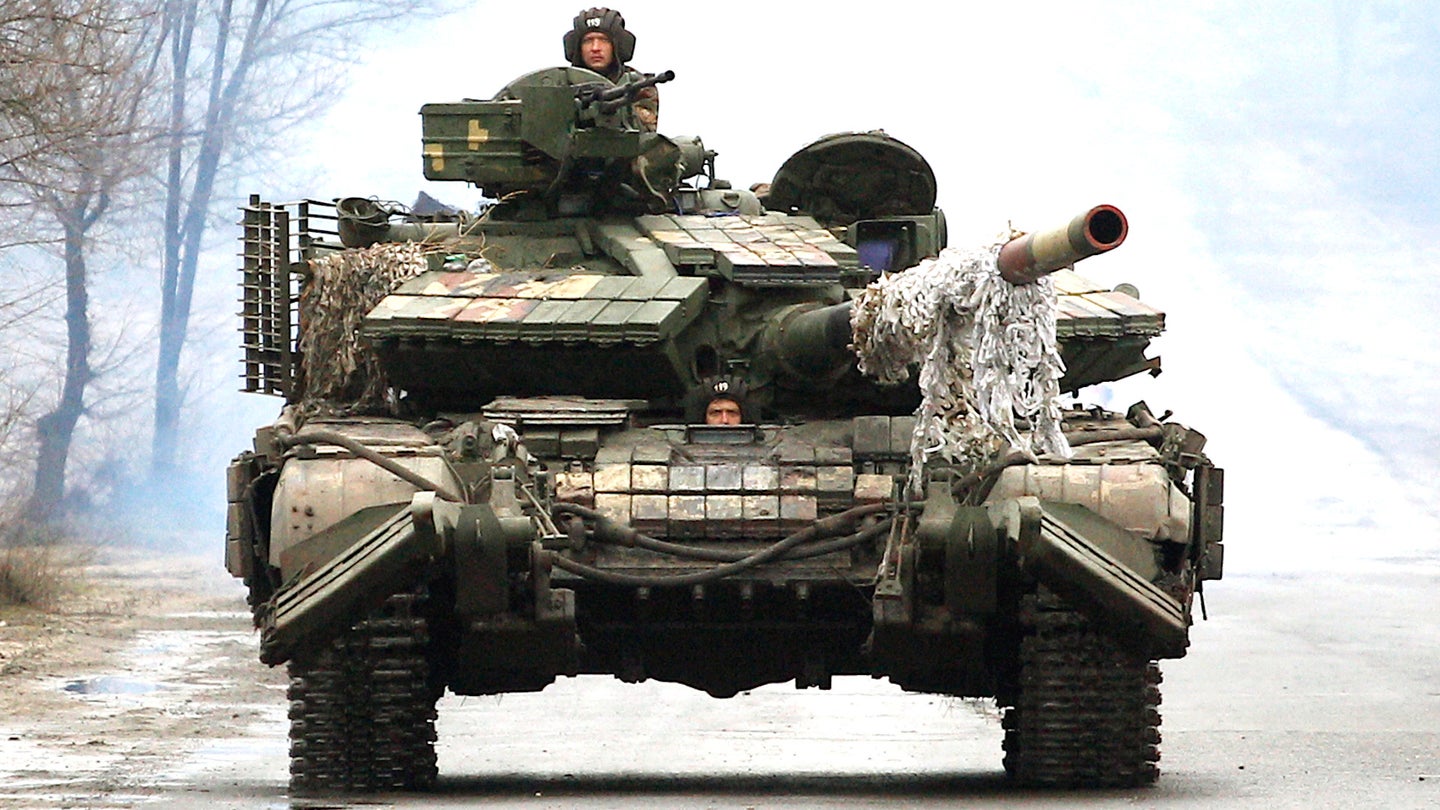 With Russia's war against his country now entering its fifth week, Ukrainian President Volodymyr Zelensky has addressed NATO heads of state, who are attending an extraordinary meeting at the alliance's headquarters in Brussels, Belgium. In his remarks, where he appealed for more military assistance, he disclosed for what appears to be the first time that the Ukrainian government has been asking NATO members for hundreds of tanks in addition to widely reported requests for dozens of fighter jets. Though the Russian military's advances in much of Ukraine have stalled out, it continues to enjoy a significant numerical advantage in personnel and materiel over the defending forces. This could be a significant factor in the conflict in the days and weeks ahead as it transforms more into a war of attrition.

Separately, the Russian Navy did suffer a major loss today after an Alligator class landing ship was destroyed in an explosion in the occupied port of Berdyansk on the Sea of Azov. Other ships were reportedly damaged in this incident, the circumstances of which remain murky, as you can read more about here.

Before getting into the latest news below, War Zone readers can get fully up to speed first on what has happened in the conflict in Ukraine so far with our previous rolling coverage here.

Ukrainian President Zelensky said that his country has asked NATO to either donate, or sell, 500 tanks in his remarks to the alliance's heads of state today. "You have at least 20,000 tanks! Ukraine asked for a percent, one percent of all your tanks to be given or sold to us!" he said.

"But we do not have a clear answer yet," he added. "The worst thing during the war is not having clear answers to requests for help."

It's not clear what kinds of tanks Ukrainian officials might be looking to acquire from NATO members. A number of countries in the alliance do still operate Soviet-era tanks and other armored vehicles, or modernized derivatives thereof, that are similar to designs already in Ukrainian service. Other examples could be in storage. Sending types that Ukraine's armed forces have some familiarity with already would make it easier for them to be used effectively in combat.

Zelensky also reiterated a request for additional combat jets and implicitly criticized NATO's decision not to implement a no-fly zone over Ukraine. The alliance, as an organization, has ruled out a no-fly zone given that it would put it in direct conflict with Russia, a major escalatory step it is not willing to take at present. Discussions about potential transfers of Soviet-era combat jets to Ukraine that various NATO members still operate have all but collapsed, in part under the weight of concerns about the risks of escalation with Russia, as well.

American authorities have said that they do not believe that sending more fixed aircraft represents the most practical way at present to bolster the Ukrainian military's air and missile defense capabilities, favoring the deliveries of ground-based air defense systems, including mobile and shoulder-fired types, instead. The immense value that more surface-to-air missile systems would offer Ukraine, especially Soviet-era and Russian-made designs the country's armed forces are already familiar with, is something The War Zone

has explored in detail.

Zelensky indicated that Ukraine authorities have been asking NATO for other higher-end weapon systems, as well, including unspecified rocket artillery launchers and anti-ship missiles. Foreign Policy separately reported today that the U.S. government is consulting with other NATO allies regarding anti-ship missiles.

In addition, the Ukrainian President accused Russia of employing munitions loaded with white phosphorous in Ukraine, with some reports saying that this represents the use of chemical weapons in the country. White phosphorus is controversial and its use in certain circumstances could constitute a war crime or a crime against humanity, but it does not meet the definition of a prohibited chemical weapon under the international Chemical Weapons Convention.

There were reports earlier this week suggesting that such weapons had been fired at a suburb of Kyiv. However, based on the videos and pictures available it appears more likely that these were 122mm 9M22S artillery rockets, which have incendiary warheads loaded with thermite.

“Please, never tell us again that our army does not meet NATO standards," Zelensky added in his remarks. "We have shown what standards we can reach."

Zelensky's full remarks, with English subtitles, can be seen in the Tweets below.

In a closed-door discussion with NATO officials, Zelensky reportedly did not ask for a no-fly zone or membership in the alliance, according to a senior U.S. government official.

NATO Secretary-General Jens Stoltenberg, whose term as head of the alliance has just been extended for another year, announced today that a formal decision has now been made to send Ukraine additional military aid packages to improve the country's defenses against chemical, biological, radiological, and nuclear attacks, as well as cybersecurity threats. He said that four new standing battle groups have been officially established in Hungary, Bulgaria, Slovakia, and Romania, as well. Stoltenberg had said yesterday that he expected all of this to be approved at the meeting today.

The U.K. Ministry of Defence has assessed that "Russian forces have almost certainly suffered thousands of casualties" whilst fighting in Ukraine so far. It added that it is unclear how Russia's military could go about integrating any reserve units and foreign forces that are mobilized to make up for those losses and what actual impact those units might have on the ground.

The Russian military released the video seen in the Tweet below today, which it claims shows a Ukrainian air defense system being destroyed by a 152mm Krasnopol laser-guided artillery shell. The low quality of the video, which appears to have been shot from a drone, makes it difficult to independently assess this claim.

The Russian Ministry of Defense says the vehicle below shows combat engineers clearing mines and improvised explosive devices from an area in the vicinity of the southern Ukrainian city of Kherson. IMR-2 and BMR-3 armored engineering vehicles are seen in the footage.

Russian Defense Minister Sergei Shoigu has resurfaced at a meeting of President Vladimir Putin's Security Council today after nearly two weeks out of the public eye.

There is no clear path to a positive outcome for Russia in Ukraine. It could win every future battle, but it has already lost.