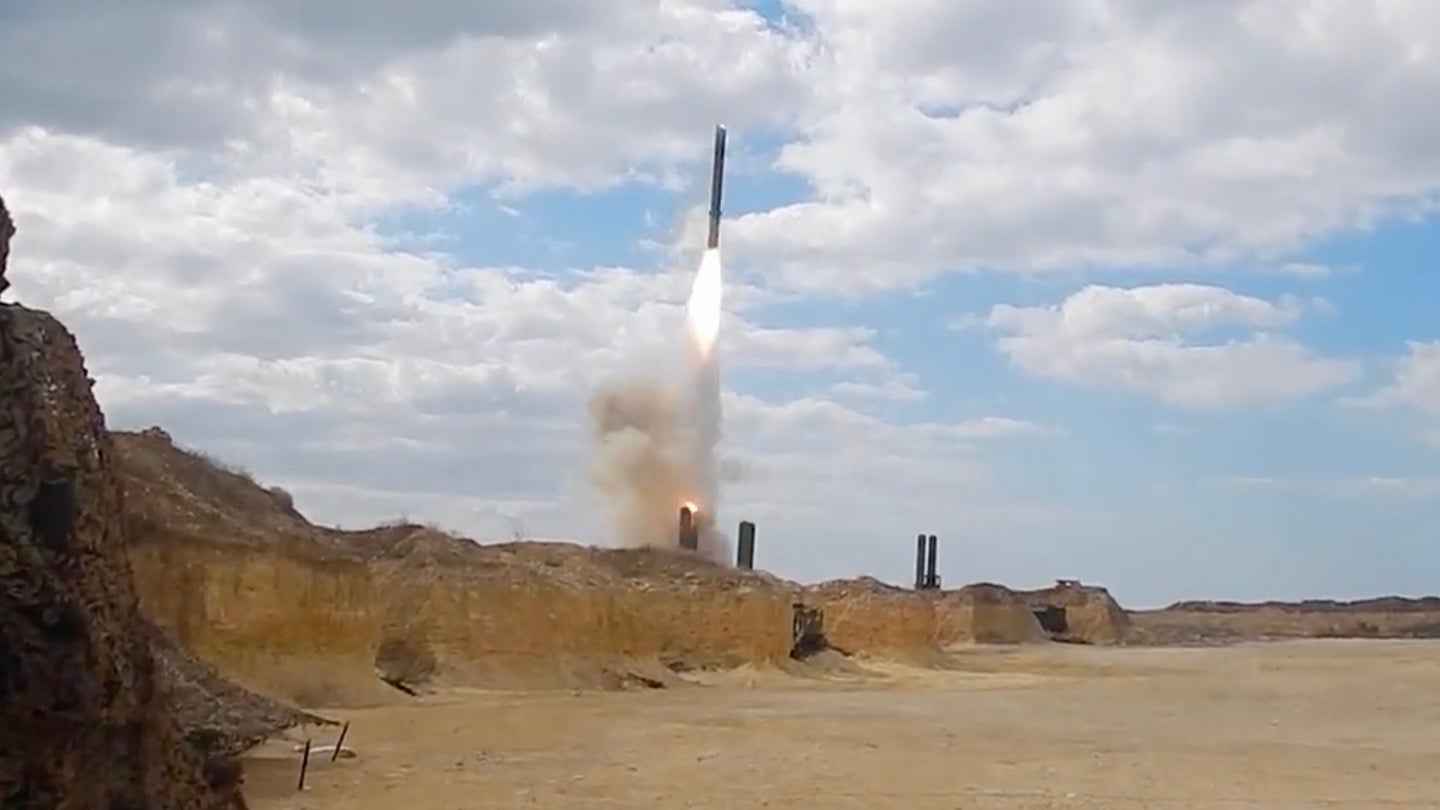 The Russian Ministry of Defense has released a video that it claims shows the K-300P Bastion-P coastal defense missile system launching strikes against ground targets in Ukraine. While there has been at least one other recent report of Russian use of the Bastion system to hit ground targets in Ukraine, the latest video, which was taken in occupied Crimea, appears to be the first visual evidence of it in action during this conflict and shows three missiles being launched in quick succession.

According to the Russian Defense Ministry, the missiles fired from the Bastion systems destroyed “a large arsenal with weapons and military equipment of the Ukrainian troops, including those received from Western countries.” This would not be the first occasion that Russia claims to have targeted such caches in western Ukraine, after having previously declared these shipments of arms as legitimate targets.

Previously, on March 19, a Russian Ministry of Defense spokesman had claimed that a Bastion system was used to “destroy a radio and reconnaissance center of the Ukrainian forces ... in the Odesa Region,” suggesting that Bastion has been used against ground targets in the country on at least two separate occasions.

At this stage, it’s also important to remember that we have only the Russian accounts of the usage of Bastion in Ukraine to go on. It’s not clear when the video provided today was taken, although open-source intelligence research does indicate that the missiles are seen being launched from a location in Crimea.

The missile is launched by a solid-fuel rocket booster before a liquid-fuel ramjet motor takes over, propelling it to a speed of up to Mach 2.2. As well as a maximum advertised range of more than 180 miles, which involved a high-altitude cruise phase, the missile can also be programmed to fly a low-altitude trajectory, reducing the range to around 75 miles.

The Bastion-P is a mobile coastal defense system and is primarily intended to engage high-value naval vessels operating off the coast. As such, it’s deployed by the Russian Navy around certain key maritime areas, including Crimea, Kaliningrad, the Kuril Islands, and the Arctic.

A typical Bastion-P battery includes one or two command and control vehicles on KamAZ-4310 6×6 truck chassis, one support vehicle, four launcher vehicles based on the MZKT-7930 8×8 chassis and each loaded with two ready-to-fire missiles, and four loader vehicles.

One interesting aspect of the missiles used in the Bastion-P, at least in an anti-ship engagement, is a reported collaborative attack feature. According to the U.S. Army Foreign Military Studies Office, or FMSO, “The guidance system can purportedly work in tandem with other missiles, and can allocate and classify targets based on their importance, and then select an appropriate attack scheme. Following the destruction of the primary target, the remaining missiles attack other ships, so no target is attacked by more than one missile.”

However, the apparent employment of the Bastion in Ukraine highlights the system’s secondary land-attack capability, which has previously been demonstrated in combat during Russia’s intervention in Syria.

The missiles used in the Bastion systems rely on an inertial navigation system (INS) with GLONASS satellite navigation for their initial flight toward the target, before switching to active radar guidance as they approach it. In land-attack mode, the active radar seeker is likely only suitable for engaging very large targets, with a significant radar reflection, with the missile presumably otherwise relying on INS and GLONASS only, although it’s unclear what degree of accuracy is achieved. Clearly, only static targets can be engaged.

Bearing in mind the disclosed maximum range of 180 miles, the Bastion would be able to strike targets along the coast of mainland Ukraine, including Odesa, Mykolaiv, and Kherson, even when launched from Sevastopol, in the south of Crimea. Were the mobile launchers to be moved further north in Crimea, that would bring a huge swath of southern Ukraine within range of the missiles.

As to why the Bastion was used in the context of Russia’s war in Ukraine, there are several possibilities. First, while not necessarily a first-choice weapon for attacking land targets, the systems are at least well-positioned to strike mainland Ukraine. The systems are fielded by the 126th Coastal Defense Brigade of the Black Sea Fleet, so were already on hand in the region, where they contribute to a “super missile engagement zone (MEZ),” with many anti-ship missile types deployed to ward off NATO warships. However, with next to no Ukrainian Navy warship targets, it’s not illogical to employ them in their secondary role.

Bal and Bastion coastal defense missile systems of the Black Sea Fleet carry out live-firing against sea targets during the Kavkaz-2020 maneuvers:

There has already been much discussion about how, in the fourth week of its invasion, the Russian Armed Forces are starting to run low on stocks of precision-guided standoff weaponry — modern ballistic and cruise missiles. The Pentagon recently confirmed that stocks of guided standoff weapons were becoming depleted, after more than 1,100 missile strikes. That number suggests that Russian inventories of such weapons were actually relatively small, to begin with, at least in comparison to U.S. equivalents. In general, this should not come as a huge surprise after Russia’s massive use of dumb weaponry in Syria, but it remains perplexing that those stocks of precision weapons are apparently so limited.

What is more, any attempts to address the deficit won’t be easy, with standoff weapons having long lead times in general, a situation that will only be worsened by the new rounds of sanctions that have been placed on Russia in response to its invasion of Ukraine. Already there are unconfirmed reports that Russia’s largest armored vehicle manufacturer may have run out of the parts required to produce and repair tanks.

Shortages of dedicated land-attack missiles, like the naval-launched 3M14 Kalibr that was apparently used extensively in the opening phase of the campaign, could have led to the need to employ the Bastion in this same role. Today, as well as the Bastion missile launches, Russia also published a video showing the launch of eight Kalibr land-attack cruise missiles from a corvette in the Black Sea.

The decision to expend costly missiles on static ground targets initially seems peculiar, but it could also reflect the limited ability of Russian tactical combat aircraft to achieve the same goals, these being forced to operate without full air superiority and, apparently, with only a limited range of precision-guided ordnance available to them. Having said that, the Iskander series of ballistic and cruise missiles, as well as the aforementioned Kalibr, are all purpose-designed for attacking exactly these types of targets.

There’s also the potential value of signaling this capability to the West, although NATO forces would already have been well aware of the presence of Bastion in Crimea and the fact that it has a dual-role capability as an anti-ship weapon and land attack missile.

Not to be discounted, however, is the value of demonstrating the weapon to potential customers. The Bastion system, and the export-optimized Yakhont missile, have long been touted to foreign customers and the Bastion-P has already been bought by Syria, Indonesia, and Vietnam. It’s a weapon that has few direct rivals and fulfills a niche capability. It also wouldn’t be the first time that Moscow has used a new or fairly new weapon in a combat environment in an apparent bid to drum up interest from prospective buyers, as was arguably the case with Bastion in Syria.

Bastion-P missile systems in use with Vietnam:

With the limited evidence so far available, it’s far too early to determine the success or otherwise of the Bastion’s initial use in the Ukrainian war. We don’t know exactly what was targeted in the latest strike, let alone the results achieved, or the degree of accuracy.

As it is, Russia does at least seem to have introduced a new missile type to the advanced standoff weapons that it’s employed so far in Ukraine. We will continue to look into how this strike armory is being employed in the conflict and keep you updated once we find out more.