Russia might try to use Belarusian troops to reinvigorate its offensives in eastern Ukraine or open a new front in the west. 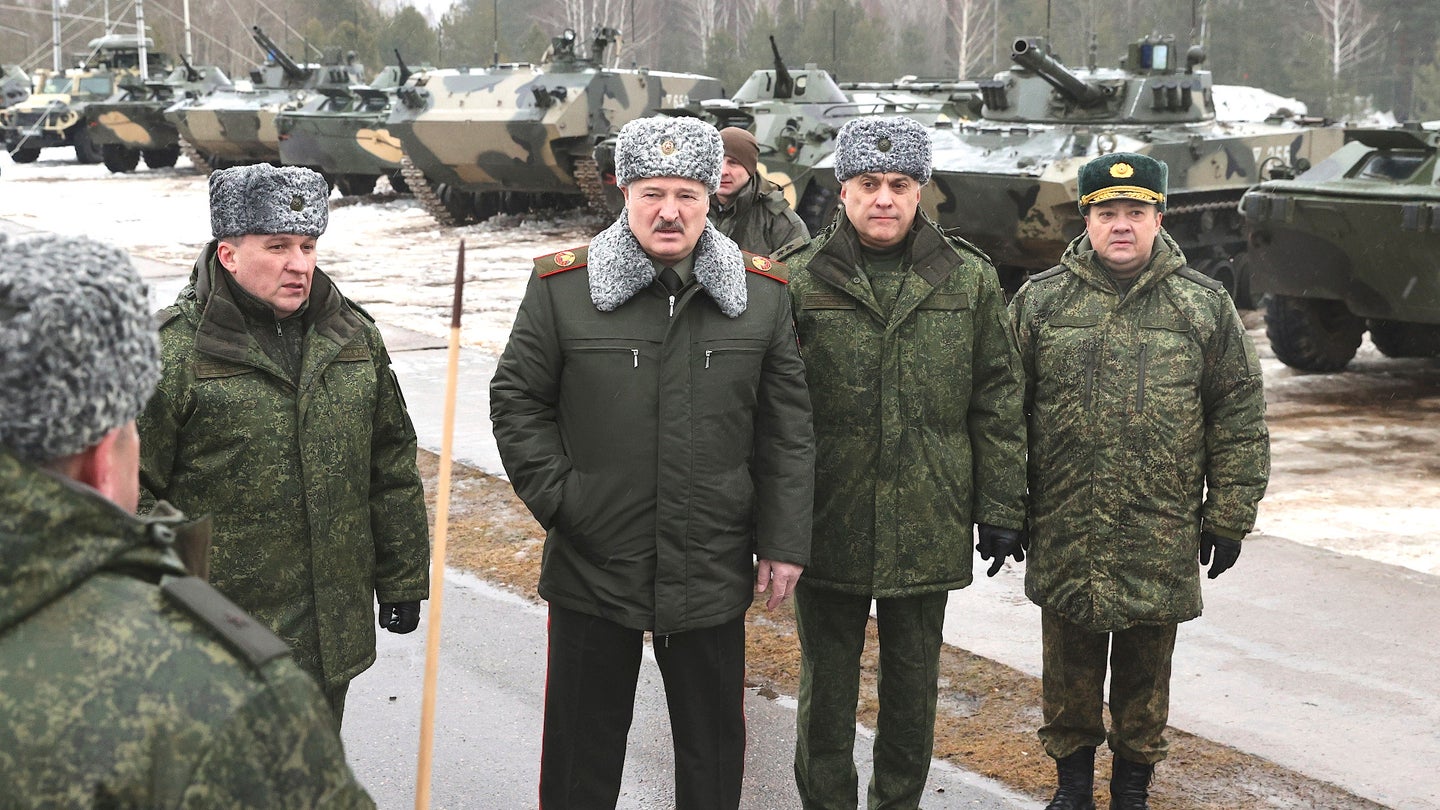 American and NATO officials are increasingly warning that large amounts of Belarusian forces could soon enter the conflict in Ukraine. A significant influx of personnel and materiel from Belarus could provide a much-needed boost for Russian forces, which have struggled to make any significant gains on the ground in recent weeks. A new incursion from Belarus might allow for the opening of a new front in northwestern Ukraine, as well, which could force defenders to refocus resources away from other areas of heavy fighting. This all comes amid U.S. military assessments that the Russian military has expended more than 10 percent of the combat capacity it had arrayed around Ukraine prior to the invasion and is now looking to various sources for additional forces to commit to the conflict.

Before getting into the latest news below, readers can get fully up to speed first on how the conflict has proceeded already with our previous rolling coverage here.

You can find The War Zone's ongoing rolling coverage of the conflict in Ukraine here.

CNN reported this morning that U.S. and NATO officials had told the outlet that thousands of Belarusian troops could move into Ukraine sometime this week. A NATO official had also warned yesterday that "the Belarusian government is preparing the environment to justify a Belarusian offensive against Ukraine," according to The Guardian newspaper in the United Kingdom.

There have been numerous reports in recent weeks that the entry of Belarusian forces into the conflict in Ukraine could be imminent, but those deployments have yet to materialize. However, Belarus' dictatorial President Alexander Lukashenko has been and remains a staunch ally of the Russian government and supporter of the current war in Ukraine, and Russian forces have used his country as a base of operations from the beginning. He has also said that Russia's military could deploy nuclear weapons onto Belarusian soil in the future. Belarus is now also under increasing international sanctions over its existing links to the war in Ukraine, as well.

There have been unconfirmed reports recently suggesting that Russian and/or Belarusian forces may be massing in or around Belarus' city of Brest, which is situated very close to the country's borders with Ukraine and Poland in the west.

In addition, these new warnings follow growing assessments that sluggish progress on the ground together with significant losses in personnel and material has prompted Russia's military to at least begin exploring options for bolstering its forces in Ukraine. The U.S. military has assessed that more than 10 percent of the combat capacity that Russia arrayed around Ukraine prior to the invasion has now been lost or otherwise expended. The possible avenues for finding additional forces could include the deployment of additional Russian units and foreign personnel from countries like Syria and Libya. So far, there are no indications that any foreign troops have joined the Russian side in Ukraine.

In the meantime, Russian forces continue to lay siege to multiple cities in eastern, northern, and southern Ukraine, including the capital Kyiv. Russia's military shifted its focus to encircling major cities weeks ago now as its advances slowed, a trend that has only continued since then.

Russian progress in actually capturing cities has also largely stalled out and there are indications that Ukrainian forces have shifted the momentum enough in some places to at least make limited counteroffensives. This includes areas around Kyiv, where there are unconfirmed reports that some Russian forces may now be entirely cut off from their supply lines, as well as in areas to the east near Kharkiv.

Ukrainian defenders continue to hold in Mariupol, a strategic port city on the Sea of Azov north of the Black Sea, despite it having been entirely surrounded for more than three weeks now. Russian warships offshore have now joined the already punishing bombardment of this city.

Russian forces and Russian-backed separatists are inside the city limits now, but the fighting has continued. A video, seen in the Tweet immediately below, emerged today reportedly showing Ukrainian tanks engaging Russian units. The controversial neo-Nazi-linked volunteer Azov Battalion, which has been contributing to the defense of Mariupol, also recently claimed to have destroyed a Russian Navy Project 03160 Raptor class patrol boat, which can be used to land small units, that had moved close to the shore with 9M113 Konkurs anti-tank missiles.

A senior U.S. defense official said today that the U.S. military has now assessed that Russian forces are deliberately targeting civilians as part of their current strategy in Ukraine.

Russian officials also continue to make completely unsubstantiated allegations that Ukrainian forces, possibly with American support, are preparing to launch chemical or biological weapon attacks. The U.S. government has been actively monitoring for indications that Russia might be preparing to launch its own such attacks, possibly as a part of a false flag operation. U.S. President Joe Biden said yesterday that there is a very real risk of some sort of incident like this occurring in Ukraine.

Russia's tabloid newspaper Komsomolskaya Pravda says that a story that appeared on its website yesterday that said almost 10,000 Russian troops had been killed in Ukraine was false and the result of a "hack" of some kind. This is not the first time a Russian media outlet has retracted such a story and claimed to have been the victim of some kind of malicious activity.

A spate of curious Russian government air activity involving various highly specialized airborne command posts, communications relay aircraft, and VVIP jets, among others, has been continuing this week. Many of the flights that have occurred over the past two days are similar in many respects to those that were observed at the end of last week. The reasons for all of this remain largely unexplained, but could be linked in part to strategic drills of some kind that might include exercising contingency plans for dispersing members of Russia's senior leadership, including President Vladimir Putin, to various secure bunkers in the event of a major crisis. You can read more about this and other potentialities in this recent War Zone piece exploring these flights.

Russia no doubt hopes the latest iteration of the Buk surface-to-air missile system will help turn the tables against the Ukrainian Air Force.

Russian naval activity has been steadily increasing near the strategic Black Sea port city of Odesa.

Flurry Of Government Aircraft Activity Over Russia Draws Attention: We Break It Down

The flights included a mass launch of Russia’s strategic communications, command post, and VVIP aircraft out of Moscow.