Watch this B-52’s unique swiveling landing gear get a full workout during this windy recovery at RAF Fairford. 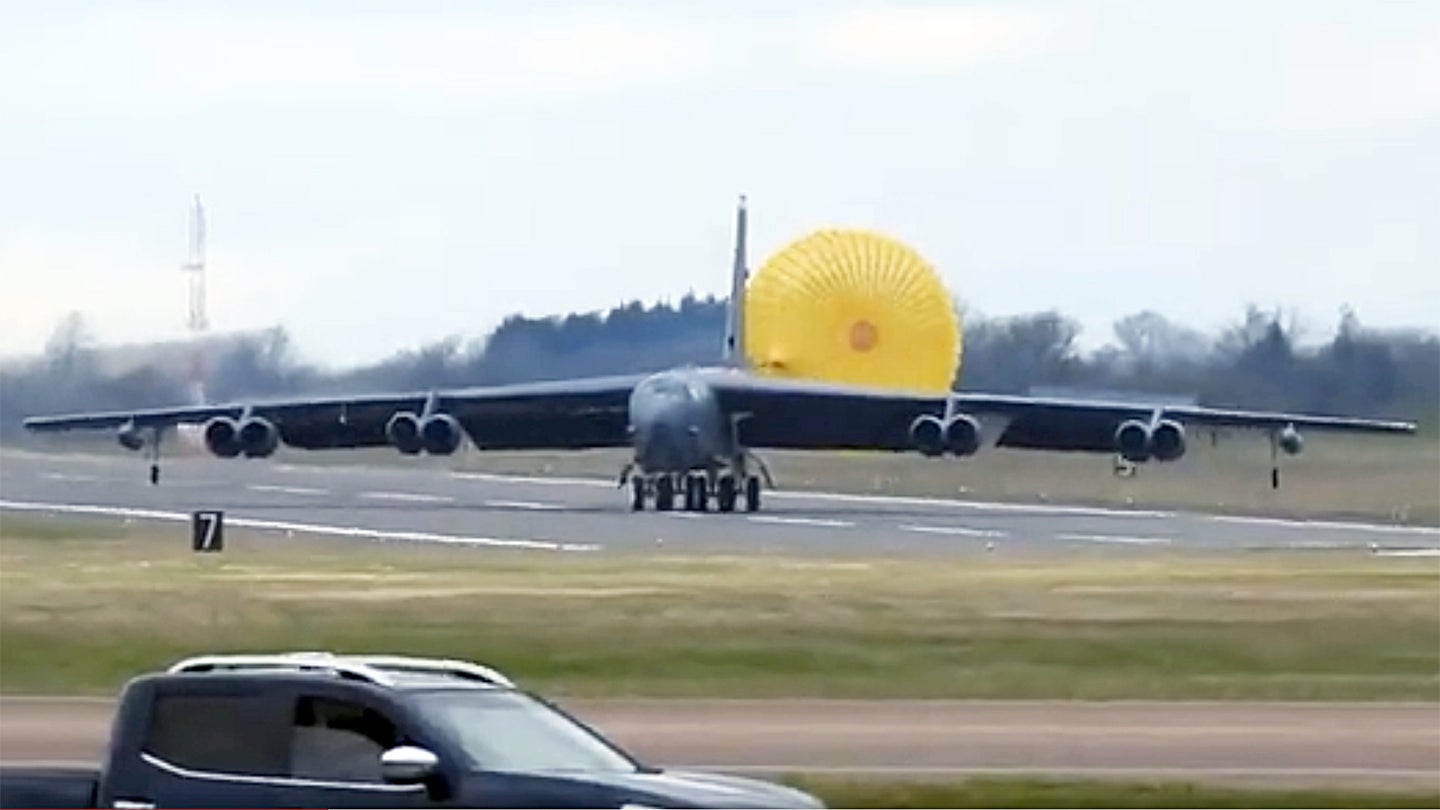 If anything the slab-sided B-52 Stratofortress has in spades, it is personality. The big iconic bomber drags around its own weather system of sorts via the inky exhaust plumes of its TF33 turbofans, eight of which scream their way through the sky attached to the B-52's huge wings. The wrinkly old airframes with centerline main gear and outrigger-like wheels look especially interesting when landing, but the B-52 turns into a really bizarre beast when the winds pick up at the airfield they are landing at.

The aircraft is uniquely predisposed to the effects of crosswinds and due to its extremely narrow wheelbase and huge wings, crabbing — flying cocked into the wind to balance the effects of wind in order to retain a straight ground track — is how the 'BUFF' safely recovers when the wind is howling across the airfield. And her pilots don't 'kick out the crab' with cross control movements before touching down as to not overstress the landing gear like aviators of common aircraft do. Instead, the B-52 was built with the ability to set its swiveling landing gear to the heading direction of the runway. This capability allows the B-52 to land like no other aircraft, basically crabbing through touchdown and rollout during higher crosswind conditions. The video below, taken on March 10th, 2022, during the B-52's current bomber deterrence rotation to RAF Fairford in the United Kingdom, is one of the greatest depictions of the maneuver we have ever seen.

@BrunelHeritage, who was kind enough to share the video with us, tells us the following about it:

"I made it to Whelford Road just in time to see the return of TRIBE41 ("The Warrior" 61-0039) and TRIBE42 ("Night Train" 61-0018) arriving back at Fairford after a morning sortie over France. TRIBE41 declared an in-flight emergency for a smoking, stuck landing gear upon arrival. It was quickly shut down and towed back to its parking stand. The video shows TRIBE42 coming in after and performing a crab landing in a stiff crosswind."

I have talked about the BUFF's unique landing characteristics and its swiveling landing gear in the past, but this little excerpt from a post from years ago does a good job of explaining it:

Because of the B-52's massive side surface area and low-slung wing, crosswind landings are especially challenging. With this issue in mind, Boeing engineers built the B-52's main tandem landing gear with a genius feature — they swivel. The details of this feature were kept secret for years after the Stratofortress's introduction into service.

The pilot simply dials in the runway's heading via a rotary dial in the cockpit and the gear will remain properly aligned with a selected compass heading throughout the jet's approach. This way the pilot can fly the approach crabbed into the wind, with its wings level, all the way down to touchdown and rollout. This capability is especially relevant as the B-52's wingtips and outrigger landing gear are far from the fuselage's centerline and hang nearly as low as the jet's lower fuselage edge. Just a couple of degrees of roll to the left or to the right could result in a wing dipping multiple feet. As a result, using ailerons to sideslip or even de-crab the jet before touchdown could end in a wing-strike catastrophe. Thus B-52 pilots fly intensely crabbed crosswind approaches, sometimes looking out the cockpit's side windows at the runway, all the way through touchdown and rollout.

A huge thanks to @BrunelHeritage once again for sharing the video with us. Make sure to check out all their content on Instagram here.

Also a hat tip to our friend @Saint1Milfor the heads up!

Confessions Of A B-52 Stratofortress Maintainer

What the job of the unsung heroes that keep America’s antique go-to bomber in the air is really like.