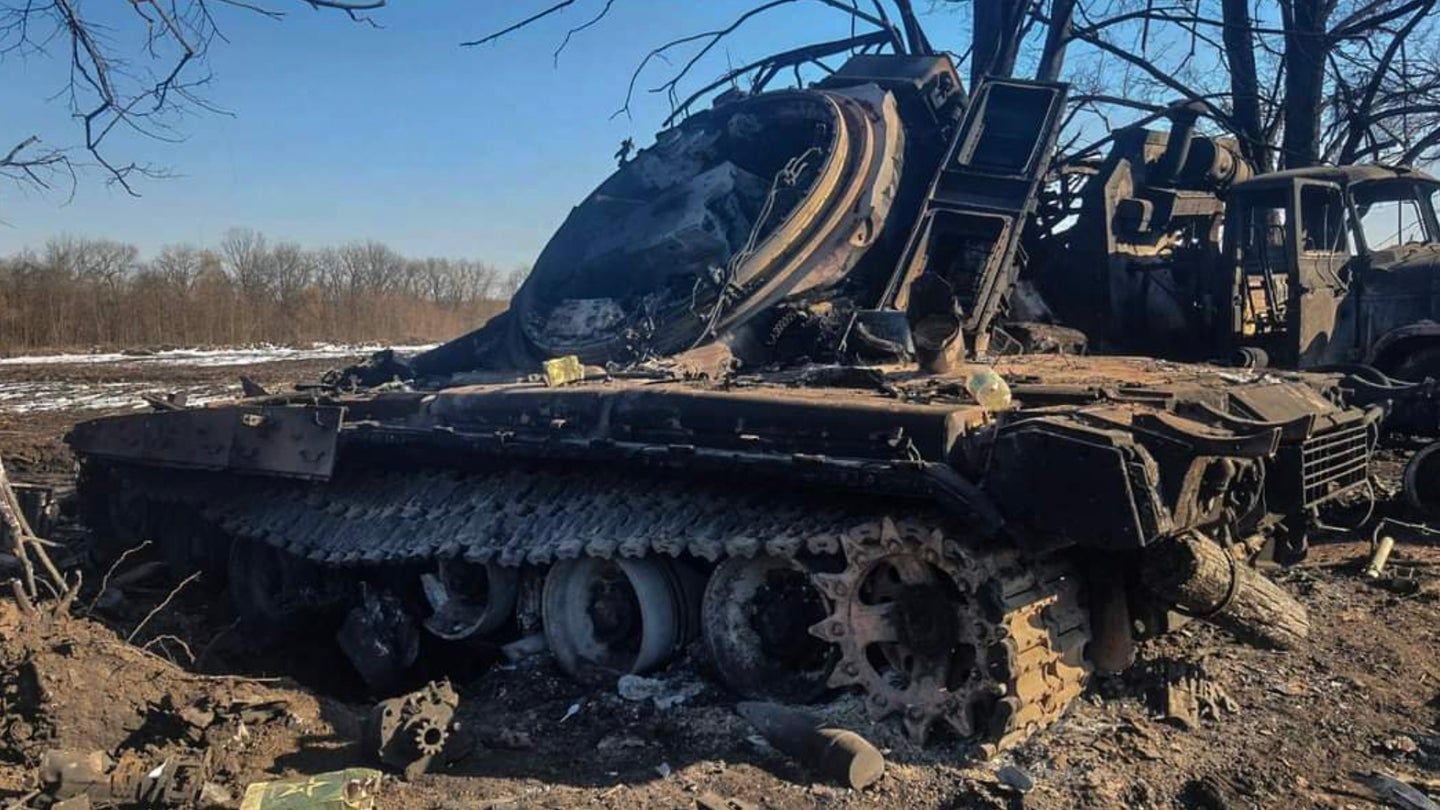 The Russian military’s one-off T-80UM2 experimental main battle tank has been knocked out during recent fighting in Ukraine, marking one of the more unusual kills attributed to the country’s defenders, who continue to disrupt the Kremlin’s invasion plans. The fact that this unique fighting vehicle was even participating in combat in Ukraine is somewhat surprising, but it would not be the first example of new or experimental Russian weapons systems being deployed in the campaign.

The team of researchers at the Oryx blog, who have been compiling photo and video evidence of materiel losses on both sides of the conflict, identified the wreckage of the T-80UM2 and stated that it was destroyed on March 17, or that its remains were uncovered on this date. The tank is rumored to have been knocked out in Sumy Oblast, in northeastern Ukraine, apparently in the vicinity of the town of Trostyanets.

The T-80UM2 is said to have been part of a larger column of Russian vehicles that came under attack by the Ukrainian Armed Forces and photos show destroyed trucks alongside the T-80UM2. Its turret was knocked off and its hull burnt out, although it’s not immediately clear how it was hit and by what.

The story of the T-80UM2 is a complicated one, tied up with a new-generation tank project with the project name Objekt 640, better known as the Black Eagle. A mock-up of the Black Eagle appeared as long ago as 1997, at which point it was being promoted for the export market.

By 1998 it had become clear that work was also underway on the T-80UM2, as a further development of the Cold War-era T-80. There seems to be substantial overlap between the T-80UM2 and the Black Eagle, to the point that some sources consider them one and the same. If that’s the case, then the T-80UM2 may very well have been intended to serve as a prototype for the Black Eagle which, as it turned out, never entered production.

As for the T-80UM2, this vehicle was based on an upgraded T-80U chassis, the main new addition being a welded-steel turret with advanced armor protection, including Kaktus explosive reactive armor (ERA), panels of which were also applied to the front of the hull. More Kaktus was fitted to the track skirts, while there were anti-fragmentation screens around the front of the turret.

In its ultimate form, the T-80UM2 was also fitted with the Drozd-2 active protection system, a hard-kill system that uses radar to detect incoming anti-tank rockets and anti-tank missiles, before automatically firing high-explosive fragmentation munitions at them, with the aim of destroying, or at last disabling them, at a distance of 20-30 feet from the tank.

A video showing the earlier Arena-M active protection system tested on a T-72 tank. The Drozd-2 operates on a similar principal:

The T-80UM2 featured a different crew arrangement compared to the T-80U, with the gunner seated on the right and the commander on the left of the turret, swapping sides compared to the earlier tank.

Otherwise, the new tank used the same main armament as the earlier T-80 series, with a 125mm 2A45M smoothbore gun, but this was now fed ammunition via an improved type of automatic loading system. The magazine was moved from below the turret to the bustle, at the back of the turret, apparently in response to survivability concerns highlighted during fighting in Chechnya.

As originally completed, the T-80UM2 was powered by a gas turbine engine, as used in the other T-80 series tanks, although there are indications that there were at least plans to replace this with a more fuel-efficient diesel engine. It’s unclear if that modification was ever completed.

The history of the T-80UM2 is little known but it’s clear that despite the Black Eagle failing to reach series production, the Russian military found a use for the prototype. The tank may well have been useful for test purposes, perhaps also trialing other new systems and features, although there are suggestions that it was ultimately deployed within a frontline combat unit, rather than being assigned to an experimental facility.

The T-80UM2 appeared at the large-scale Zapad-2021 military maneuvers, at which point it was reportedly operated by the elite 4th Guards Tank Division, assigned to the Western Military District. Headquartered at Naro-Fominsk near Moscow, the division includes two tank regiments and one motor rifle regiment, all of which include different versions of the T-80. With this in mind, it may have not been too big a logistical and maintenance challenge to operate the unique T-80UM2 as well, although the exact reason for this also remains obscure.

Now that the T-80UM2 has met its demise on the battlefield, the big question is not why it was apparently fielded by a frontline unit, but why it was deployed to Ukraine in the first place.

Even with Russian Ground Forces taking heavy losses — certainly far heavier than anticipated — it’s unlikely that stocks of high-end armored vehicles are being reduced to such an extent that even a one-off tank, perhaps with a primarily experimental role, was thrown into battle simply to make up the required numbers.

Among the many surprising elements of how the Russian military has gone about the invasion of Ukraine, there has been a seeming willingness to deploy vehicles that don’t appear ideal choices bearing in mind the type of warfare and the logistics challenges of highly varied fleets. For example, there has been at least one sighting of an unarmored UAZ-39094 van, reportedly used by the Russian forces, while even in the early days of the campaign trains were spotted transporting civilian vehicles toward the war zones, apparently intended for military use there. These examples suggest, at the very least, acute logistics failings on the part of the Russian war planners.

It could also be the case that despite — or even because of — the ferocity of the fighting on the ground, Russia is keen to test out different capabilities against modern battlefield threats. In such a scenario, it’s conceivable that the T-80UM2 was deployed to Ukraine specifically to assess how its protection features, and perhaps other systems, fared against some of the advanced weaponry, including anti-tank missiles, fielded now by Ukraine. As far as is known, the T-80UM2 was the only tank deployed by Russia in the fighting so far to feature an active protection system.

There would also be a precedent for sending advanced or experimental land systems to Ukraine, or at least to areas closer to it, in the apparent deployment of the rare BMPT-72 Terminator armored fighting vehicle, only introduced to frontline service last December, to the Ukrainian border area last month. On the other hand, the T-14 Armata advanced main battle tank, which reportedly underwent combat trials in Syria, is so far yet to appear in the Ukrainian campaign. Even Russia's claimed use of a hypersonic Kinzhal missile against a target in Ukraine is a reminder of how Russia likes to promote its latest weapons tech via use on real battlefields.

If the T-80UM2 was taking part in some kind of pre-planned combat evaluation, of the kind that we’ve also seen in Syria, then it would appear to have ended with the conclusion that the Drozd-2, and whatever other protection features the tank was fitted with, ultimately failed to do their job.

As it stands, the reason for the T-80UM2’s appearance in the Ukrainian conflict, let alone the cause of its demise, remains a puzzle. But with other rare Russian military vehicles also having been noted either in Ukraine or close to its borders, this will likely not be the first such mystery relating to the Kremlin’s deployment of such weapons.