Updates From The 24th Day Of Russia’s Invasion Of Ukraine

Cosmonauts in peculiar spacesuits and thermobaric rocket launches on video, these are your updates on Russia’s invasion of Ukraine. 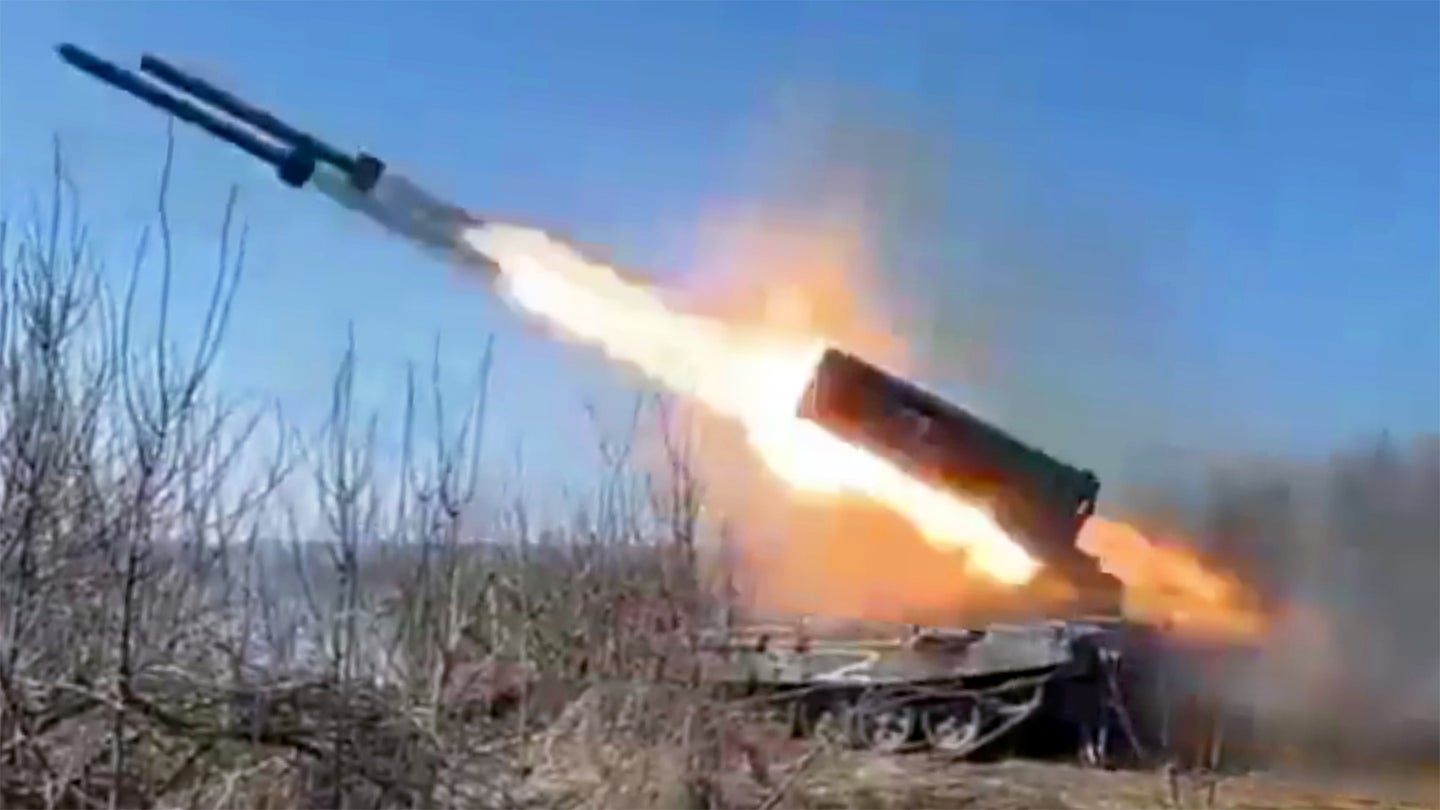 Russia and Ukraine are well into the fourth week of fighting, though frontlines in the conflict have changed little if at all in the last few days. This has led to only more indiscriminate bombardments. You can get caught up with earlier happenings in the war with our previous rolling coverage here, then pick up with the latest news from Ukraine below.

This update section is closed. All new updates can be found here in our latest post.

Here is the latest control map from the UK MoD:

Here is their latest intel assessment:

Video emerged Saturday of a Russian TOS-1A thermobaric rocket launcher in use somewhere in Ukraine. Considered by many as a horrific siege weapon, numerous TOS-1A systems could be seen in the buildup before the invasion and in several videos of Ukrainians engaging Russian forces.

The “Z” marked vehicle appears to fire a full salvo at unknown targets, with the rocket motors starting a considerable brush fire around the vehicle in the process. It’s believed to be one of the first times we’ve seen the TOS-1A in use in Ukraine.

You can read more about the system and its horrific effects in our past feature here.

Three Russian cosmonauts arrived at the International Space Station on Saturday after launching from Baikonur Cosmodrome in Kazakhstan, with a rather unusual choice of spacesuit. The cosmonauts wore blue and gold matching the design of the Ukrainian national flag amid Russia’s ongoing invasion in Ukraine. While initially believed to be a stunning act of defiance by some of the most revered men in Russia, the actual reasons behind those spacesuits are likely more complicated than that.

Theories ranged from a pre-planned victory lap for a Ukraine war that was supposed to be over by now, to a move troll their western counterparts to an absurdly poorly planned celebration of the cosmonauts' alma mater which shares similar colors. Regardless of what happened, it was a huge optics and PR fail at the worst possible time.

In Ukraine itself, Russia claimed it used the air-launched Kinzhal hypersonic ballistic missile to strike a missile storage bunker in Ivano-Frankivsk Oblast, but video of the alleged strike doesn’t seem to match up with the purported target. In fact, the entire claim is suspect. You can read all about it in our analysis here.

Parallel to the Kinzhal claim, the Russian Ministry of Defense reported it used Bastion-P coastal defense missiles to attack land targets, specifically a radar and reconnaissance site in Odesa Oblast.

The situation in Mariupol continues to deteriorate despite a steadfast Ukrainian defense in the encircled port city.

Refugees fleeing the city were reportedly stopped by Russian and separatist troops checking men for identifying tattoos, no doubt looking for any soldiers who may be fleeing the city out of uniform.

Ukraine is claiming it has killed yet another Russian general near the frontlines, this time the reported commander of the 8th Combined Arms Army, Lieutenant General Andrey Mordvichev. The Ukrainian Armed Forces claim he was killed at the Kherson Airfield.

We had high-resolution imagery of Ukrainian artillery’s aftermath at the occupied base with multiple Russian helicopters in flames on the tarmac. You can read about Ukraine’s attacks on the airbase here.

There has been no independent confirmation of Mordvichev’s death, but if so, he would be the highest-ranking Russian officer killed in the war so far and the fifth general. Ukraine has reportedly used intercepted communications, including satellite phone calls, to pinpoint Russian commanders and target their positions, according to a report from the New York Times.

Speaking of Russian problems, there’s a tweet showing a plea from Russian officials in the Voronezh region asking the public to donate supplies to the war effort, not a great sign for the overall supply situation.

There are further reports that Russian losses are mounting and in some respects overwhelming. Reports are emerging from within Belarus that Russians killed in Ukraine are being discretely sent back to Russia under cover of darkness by the hundreds, if not more.

Russia still has only acknowledged 498 members of the Russian Armed Forces killed since the operation started February 24, though western analysts and senior U.S. officials have reportedly said the real number could be easily more than 10 times that.

According to Oryx, who is carefully inventorying losses of equipment during the war via open-source intelligence methods, Russia crossed the unfortunate milestone of having now lost at least 250 tanks since February 24. Meanwhile, Ukraine has captured more Russian tanks than it has lost of its own.

Apart from losses in men and materiel in Ukraine itself, the Russian government appears deep into the blame game for the missteps in its “special military operation.” The head of the Russian Federal Security Services unit tasked with Ukraine has reportedly been detained, and there was ongoing finger-pointing between the Russian Ministry of Defense and the FSB for their respective failures.

It’s not immediately clear how or even if Moscow's squabbles are affecting combat operations in Ukraine, but if news of arrests for failures reaches officers given deadlines to take objectives, you can bet offensive operations may become a little more desperate.

There’s also new footage Saturday of Ukrainian humvees in action against Russian troops, both firing on enemy positions and in the viewfinder of a Russian UAV directing artillery fire.

Interference with satellite radar over Belarus could be indicative of long-range air defense systems with their search radars active.

We will continue to update this section with more information until we state otherwise.