The U.S. Is Poised To Offer F-15 Eagles To Egypt

Cairo is in the market for a new heavy fighter, but some in Washington will likely want human rights improvements before signing off on a deal. 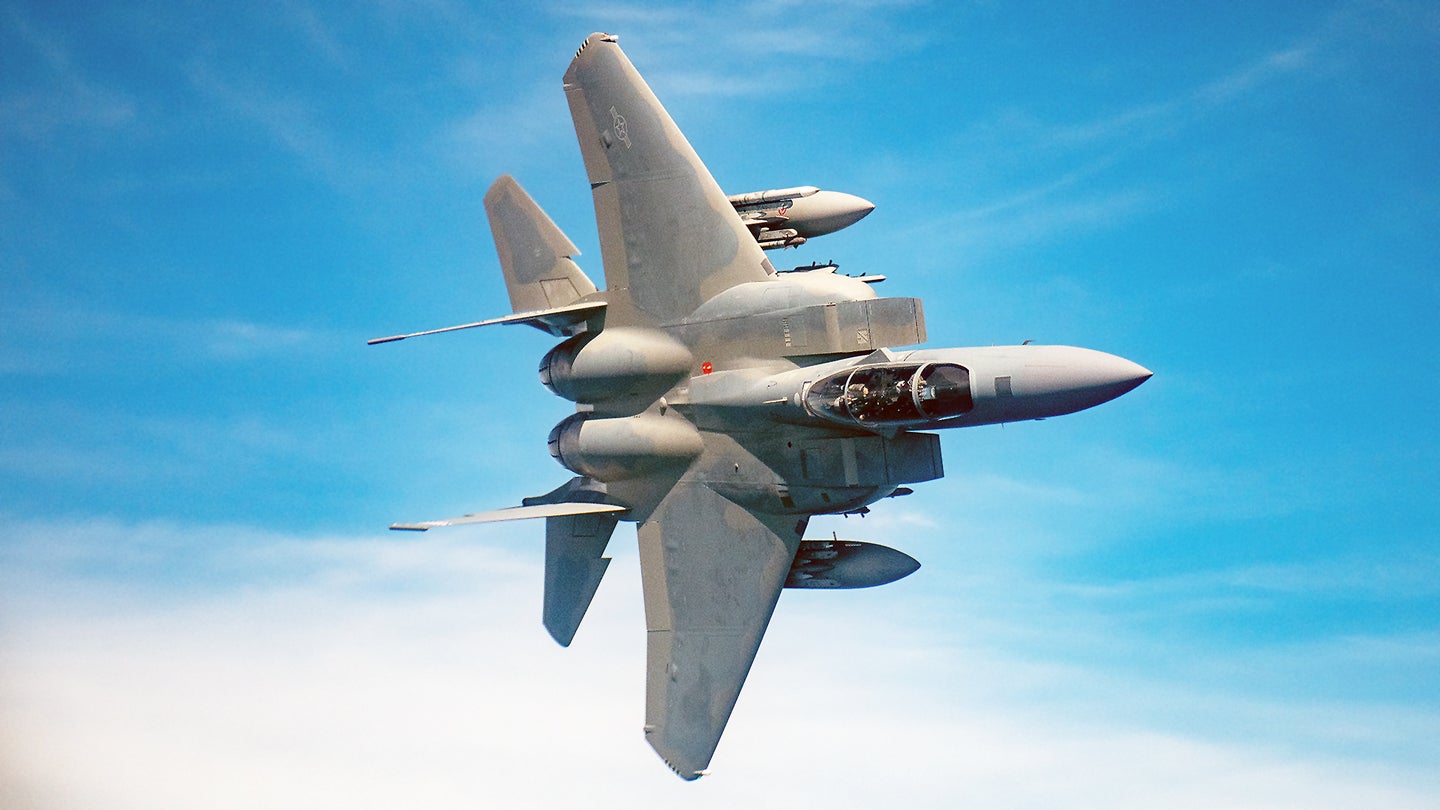 Egypt has been named as the potential recipient of F-15 Eagle fighter jets by the head of U.S. Central Command. The surprise development comes after U.S. officials attempted to guarantee that Cairo would continue to receive arms despite President Joe Biden’s administration announcing it was cutting military aid to the country amid concerns over human rights abuses. Should the F-15 deal go ahead, it would provide Egypt with a new heavyweight fighter to supersede the stalled deal for Russian Su-35 Flanker jets, but it would likely run into flak from U.S. lawmakers seeking to withhold sales of offensive arms to Egypt.

“In the case of Egypt, I think we have good news in that we are going to provide them with F-15s, which was a long, hard slog,” Gen. Frank McKenzie, the CENTCOM boss, said during a session of the Senate Armed Services Committee in Washington, DC, yesterday.

At this point, there is no confirmation as to how many F-15s Egypt may be in line to receive, or when deliveries may take place. It’s also unclear what version of the jets would be offered, but some iteration of the new-build F-15EX now being delivered to the U.S. Air Force seems most likely. More details will surely be forthcoming if the proposed deal progresses further, which would likely see a formal notification from the Defense Security Cooperation Agency (DSCA).

The announcement comes as part of wider efforts in recent months to provide Egypt with assurances that it will continue to receive U.S. arms after the Biden administration in January doubled down on plans to cut $130 million from military aid unless Egypt made undisclosed progress on human rights. Last month, during a visit to Cairo, Gen. McKenzie had said that Egypt would receive “very robust” military assistance despite this decision. “We’re still very heavily engaged with them,” McKenzie added. Indeed, the $130 million is clearly a token gesture compared to the total of $1.3 billion in military aid allocated by the United States for Egypt for Fiscal Year 2020 alone.

The move by the Biden administration followed reports of Egyptian President Abdel Fattah al-Sisi’s heavy-handed response to dissent in the country. Since the 2013 military coup, Egypt’s relationship with the United States, especially as regards military matters, has been strained and a number of proposed arms deals have been affected. Among them are potential sales of 10 AH-64 Apache attack helicopters, four F-16C Block 52 fighter jets, M1A1 tank components, and Harpoon anti-ship missiles.

Despite these tensions, however, Egypt remains a key U.S. ally in the region and provides support to the U.S. military including allowing access to the Suez Canal and to its airspace. The U.S. and Egyptian armed forces also take part in regular bilateral training, organized by U.S. Central Command.

Without a doubt, F-15s would be a considerable boost to the Egyptian Air Force (EAF). The service already operates a wider variety of fighters from different sources, comprising F-16A-to-Ds, Dassault Rafales and Mirage 2000s, and Mikoyan MiG-29M/M2s.

However, plans for the EAF to receive an undisclosed number of Sukhoi Su-35s under a $2-billion deal with Russia have stalled, apparently, as the result of U.S. pressure applied on Cairo to shelve the deal with Moscow. U.S. threats to use the CAATSA (Countering America’s Adversaries Through Sanctions Act) appear to have worked, with at least some of the Egyptian Su-35s having been built and test-flown but, for now, at least, being undelivered and remaining in Russia. Essentially, CAATSA offers the U.S. government a menu of different sanctions, which can be called upon to, for example, prevent a country’s banks and other business entities from doing business with their American counterparts and blocking a particular foreign government from receiving U.S. loans.

With that in mind, an F-15 sale to Egypt would actually be a win-win situation for the United States. Not only would it provide the EAF with the kind of heavyweight air superiority fighter that it’s been looking for, making the Su-35 superfluous, but it would also help reinforce Washington’s position as a major supplier of arms to Egypt. While the United States has traditionally sold high-end military equipment to Cairo, in recent years the country has bought arms primarily from Russia, France, and Italy, at least when it comes to ‘tier one’ systems.

As it is, the proposed deal, should it progress to a full Foreign Military Sales package announced to Congress by the DCSA, will still very likely face considerable hurdles before it’s signed off. The issue of human rights abuses in Egypt means it’s almost certain that some lawmakers will seek to block the deal, threatening to leave it in limbo in the same way that earlier arms transfers have been.

The $2.2-billion sale of 12 C-130J airlifters to Egypt, clearly less provocative than fighter jets, also ran into opposition before surviving an attempt to derail it earlier this month. That resolution had been put forward by Republican Senator Rand Paul.

“We should end military sales to Egypt’s criminal masters,” Paul told the Senate last week, speaking about the C-130 deal. “Partially taking away some military aid while offering new sales that are 10 times what we’ve withheld shows weakness in the face of oppression.”

A package for F-15s and associated weapons, spares, training, and support is likely to be at least as big as the C-130 deal.

Last month, and only hours after Indonesia officially announced a deal to buy Rafales, it was disclosed that the U.S. State Department had approved a possible Foreign Military Sale to Indonesia of F-15ID aircraft, a derivative of the F-15EX.

At this stage, there is no firm contract for the sale of F-15s to Indonesia and any such deal would still need to be signed off by Congress, too. And, even if it is signed off, there is a strong likelihood that certain particularly advanced items may be omitted from the jets. There is a precedent for this, with EAF F-16s, for example having been delivered with less capable AIM-7 Sparrow air-to-air missiles rather than the standard AIM-120 Advanced Medium-Range Air-to-Air Missiles, or AMRAAMs.

As an alternative to another export version of the F-15EX, it’s conceivable that Egypt could be in line for second-hand F-15C/D jets provided from U.S. Air Force stocks. With the F-15EX soon coming into service, and with F-35As replacing legacy Eagles with some frontline units, there is the possibility that F-15C/Ds may become available for transfer. Despite their age, these are also formidable fighters, having been successively upgraded — featuring a new cockpit display system and active electronically scanned array (AESA) radar — to keep them highly potent. Still, these freshest of the nearly 40-year-old jets will eventually need airframe lifespan extension in the coming decade or so that would be a costly investment, and of course, they do not possess robust air-to-ground capabilities like the far more advanced F-15EX. All this could actually play into the decision to provide Egypt with Eagle capability, ending up as being something of a compromise.

Whatever form the Eagles may take, the announcement from Gen. McKenzie makes it clear that Washington hopes to secure another big-ticket arms sale with Egypt while at the same time applying pressure to turn away from Russia and address human rights issues at home. This is a complex balancing act and it will likely be a long and fraught process before Egypt gets its hands on its first F-15s, should that ever happen.

After a complicated selection process mired by political intrigue, Jakarta has chosen its new fighter jet.