The multi-role fighters may well be joined by as many as three different armed drones as Pakistan seeks to gain an advantage over India’s military. 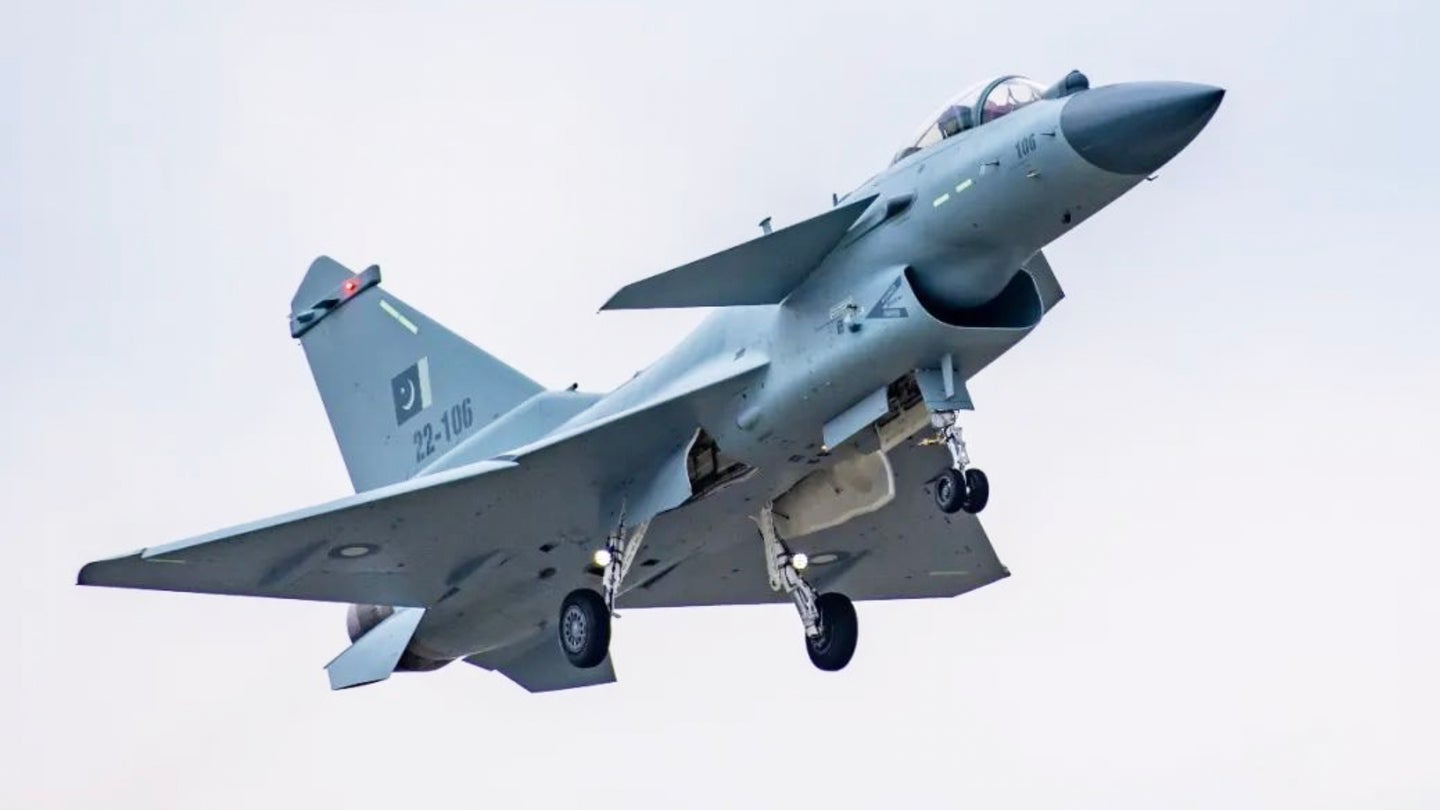 Pakistan’s first Chinese-made J-10 multirole fighter jets have touched down in the country to launch the type’s initial operations with its debut export customer. While unofficial photos of at least two J-10s in Pakistan Air Force (PAF) markings began to appear on social media last month, the service’s official induction today was a much glitzier affair and also revealed apparent plans for other new types to be procured for the service, including Turkish-made armed drones.

An official ceremony to welcome the first six J-10Cs took place today at PAF Base Minhas in Kamra, Punjab province, in the presence of Pakistani Prime Minister Imran Khan and Air Chief Marshal (ACM) Zaheer Ahmed Baber Sidhu. In an address, Khan remarked that the time from contract signature to first deliveries of these new jets was just eight months and he also directly referenced the Indian Air Force’s February 2019 airstrike on an alleged terrorist training camp in Balakot, Pakistan. The purchase of the J-10s has been seen widely as an effort to bolster the PAF’s capabilities after these strikes and the controversial air battles that followed.

“The entire nation has the confidence that their armed forces are fully capable to defend the motherland,” Khan said. “Pakistan’s response in the wake of Balakot attack sent a clear message to the world that the country is capable to defend itself.”

Other observers have discussed Pakistan’s acquisition of the J-10 medium-weight fighter as a response to India’s purchase of French-made Dassault Rafale multirole fighters.

“We do not wish to engage in any arms race but will continue to enhance our capability to ensure national security and regional stability,” ACM Sidhu said at the induction ceremony.

A video posted to social media today by the PAF, entitled On Path Of Transformation To Next Generation Air Force, includes footage of the contract signature for the jets — which are also referred to as J-10CE, a name used by the manufacturer — on June 25, 2021. The video also shows the apparent delivery flight by the jets, taking them over the Himalayas, and their arrival at PAF Base Minhas on March 4, when ACM Sidhu was there to receive them.

The first six jets are all single-seaters and appear to carry the serial numbers 22-101 to 22-106. It remains unclear just how many J-10s the PAF will receive, although last December Pakistani Interior Minister Sheikh Rasheed Ahmed mentioned that 25 of the jets would take part in the Republic Day parade that takes place on March 23. Other, unconfirmed, reports suggest that the PAF will receive 36.

The same series of videos also confirms that the PAF has established a National Intelligence, Surveillance, and Reconnaissance (ISR) & Integrated Air Operations Center, an organization that will likely be involved in bringing together intelligence from multiple sources for analysis and distribution, as well as running complex air operations.

Also making an appearance in the video are three different types of drones, suggesting that these are either on order for the PAF service or perhaps, in some cases, already in use. However, stock footage is used in the video for each of the drones so it’s unclear which, if any of them, have actually been delivered.

The first of these drones is the Bayraktar Akinci, a high-altitude long-endurance (HALE) twin-engine unmanned aerial vehicle manufactured by the Turkish company Baykar and which officially entered Turkish service last August. The Akinci’s payload of 1,650 pounds can include a wide variety of weapons. According to the manufacturer, the drone can be armed with Turkish-made MAM micro munitions, CIRIT laser-guided rockets, and L-UMTAS anti-tank missiles, all with laser guidance, as well as Mk 81/82/83 series bombs, included guided versions, and Joint Direct Attack Munitions (JDAMs). The drone has an endurance of up to 24 hours.

Another Baykar product, the Bayraktar TB2 has been operated in an armed configuration in various theaters and with notable success. The first rumors of a potential PAF order for the drone came in January this year. As well as MAM-series weapons, the 340-pound payload of the TB2 can include UMTAS anti-tank missiles with imaging infrared seekers. Endurance is also up to 24 hours.

Video of a possible TB2 drone reportedly sighted over Pakistan:

Finally, there is the Chinese-made Chengdu Wing Loong II. Plans for the Pakistan Aeronautical Complex (PAC) to co-produce 48 of these drones had been announced in 2018, but the delivery timeline was uncertain and it’s not clear if these drones have been delivered, either.

The Wing Loong II has a payload of just over 1,000 pounds that can include Blue Arrow 7 and TL-2 air-to-ground missiles, LS-6 guided bombs, and TY-90 air-to-air missiles. The endurance of the drone, depending on payload, is up to 20 hours.

Subsequently, the PAF appears to have begun operating the Wing Loong I around 2016, although the current status of these drones is unclear. Meanwhile, the Pakistan Army and Navy have introduced the China Aerospace Science and Technology Corporation (CASC) Caihong 4B (CH-4B), or Rainbow 4B.

Apparent plans to add three new larger and more capable types to the PAF inventory would seem to signal an expanded role for armed drones, although it’s not clear at this stage if all will be procured in quantity or if they will initially be employed on a more experimental basis before a firm decision on a larger order, or orders, is made. The same situation held for Pakistan’s attack helicopter procurement, with small numbers of Chinese WZ-10s being delivered for evaluation, although the Turkish-made T129 ATAK was ultimately selected, although a firm contract is apparently still awaited.

The types of armed drones would also appear indicative of a move away from using these for airstrikes on militant groups to employing them in conflicts against more capable opponents, namely India. The TB2, in particular, has won plaudits for its performance against advanced surface-to-air missile (SAM) systems, including the Russian-made Pantsir-S1, in different conflict zones.

Were Pakistan to go to war with India in the border region, its forces would face significant quantities of armor, including potentially thousands of tanks and armored fighting vehicles, across a huge frontier. Here again, the TB2, which can be armed with both anti-tank missiles and loitering munitions, as well as the other drone types, could prove very useful.

At the same time, plans to add two Turkish drone types suggest that Pakistan may not be totally happy with its existing Chinese drones. That would not be a first, with Jordan putting its CH-4Bs up for sale less than two years after buying them and at the same time having a less than distinguished service record with Iraq, which withdrew them after a spate of crashes.

In another new announcement, the PAF also revealed today that it’s due to receive Chinese-made YLC-8E radars, which have been touted by China as an ‘anti-stealth’ radar, to be used alongside the Chinese-supplied HQ-9B long-range surface-to-air missiles, service entry of which was announced last October. Both those items of equipment point to the continued effort to establish a technological edge over the Indian Air Force, as well as the deepening military relationship between Pakistan and China.

In the past, we looked at the challenges of integrating yet another fighter type into the PAF, which already operates the Sino-Pakistani JF-17 Thunder, F-16s, acquired from the United States in several batches beginning in the 1980s, and 1960s-vintage Mirages. We also looked at the specific advantages of the J-10C for Pakistan, from both a political and technological point of view, including its advanced active-radar-guided PL-15 air-to-air missiles and active electronically scanned array (AESA) radar.

However, Balakot appears to cast a particularly long shadow over the J-10 acquisition, but also the drive to incorporate new armed drones into the PAF’s force structure. At the same time, the new National ISR & Integrated Air Operations Center would appear to be an ideal organization to plan and manage air campaigns like that that took place during and in the aftermath of the Balakot raid.

As Pakistan’s major regional rival, airpower developments within India are watched especially closely. Now that the Indian Air Force has received the last of 36 Rafales fighters on order, New Delhi may well order more and the country also has other active programs that seek to field more new multi-role fighters, including a requirement for 114 jets.

A sign that the PAF, too, is looking toward fighters beyond the J-10 was provided in the service’s latest video, which includes concept art of a new-generation, stealthy-looking twin-engine fighter, with canard foreplanes. In March last year, the PAF said it aimed to have a new fighter in the air by 2028, under Project AZM, although that would seem an unrealistic goal unless Pakistan joins an existing new-generation fighter program already being run by another country, perhaps China or Turkey.

Overall, the arrival of the first J-10 fighters in Pakistan signals efforts to continue to modernize the PAF to meet threats from India and elsewhere, while the country’s developing armed drone fleet also appears to be increasingly tailored for the kinds of high-end battles that would be encountered should the two regional powers go to war again.

The long-anticipated Pakistani order for the J-10 is widely seen as a counter to India’s new Dassault Rafale fighters.