The Kremlin appears to be ramping up its disinformation campaign to a totally absurd degree as the conflict in Ukraine drags on. 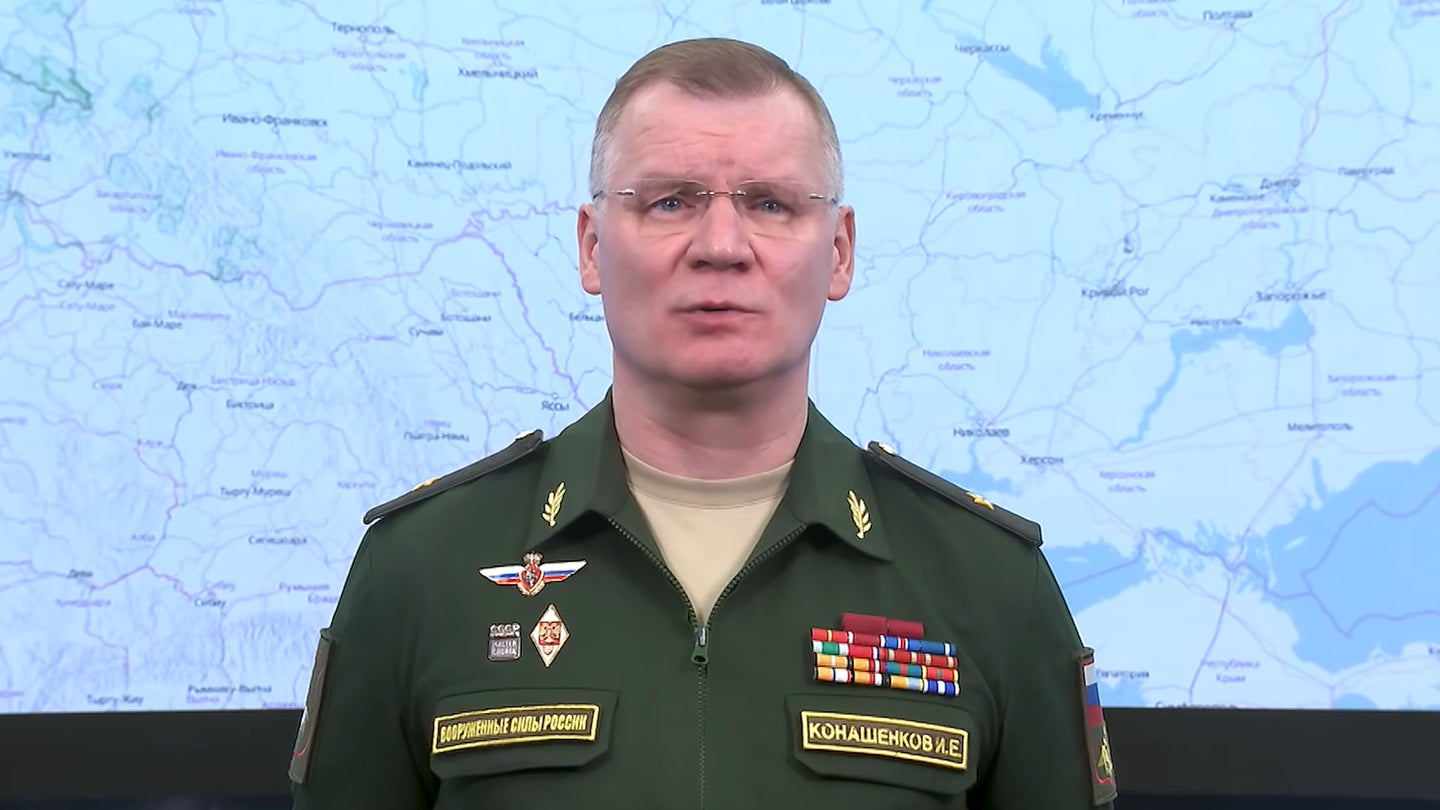 The Kremlin's invasion has now entered its 16th day and Russian forces continue to struggle to make real progress toward their objectives on the ground in Ukraine. In addition to turning to increasingly more brutal siege tactics in efforts to secure a number of important cities, which is causing a growing number of civilian casualties, Russian authorities look to be stepping up their disinformation campaign. Today, among other things, the Russian Ministry of Defense made a wholly unsubstantiated and outright bizarre claim that the U.S. government is somehow training birds infected with or otherwise carrying biological weapons to fly from Ukraine to Russia.

You can get yourself up to speed on the current state of the war in Ukraine with our previous rolling coverage here and then dive into the latest news below.

We have concluded updates to this piece and you can find our continuing rolling coverage of the conflict in Ukraine here.

We are likely to get more satellite imagery soon with the cloud cover clearing over large parts of Ukraine, but it seems Russia has moved off the main highway north of Kyiv in order to break up and disperse its miles-long convoy, or as one analyst put it to us, Russia's "great linear campout":

It also appears that a relatively ancient Tu-141 high-speed recon drone that was used in the Ukraine-Russia conflict malfunctioned and crashed in Croatia, some 350 miles from the Ukrainian border. Read our exclusive report here:

Check out this massive explosion in Lutsk:

In other news, the U.S. has chosen not to transfer Patriot batteries to Ukraine even though it was never a choice in any way:

Read our complete analysis on what exactly Ukraine needs in terms of ground-based air defense assistance in this recent feature of ours:

Russian Maj. Gen. Igor Konashenkov, the Russian Ministry of Defense's top spokesperson made the claim about weaponized birds during a press briefing earlier today. He provided no evidence whatsoever to substantiate this assertion.

It's not entirely clear how this claim came to be, but it appears to be an evolution of recent allegations, also wholly unsubstantiated, from the Russian government regarding work at U.S.-supported laboratories in Ukraine. The Kremlin's core claim, which again it has provided no evidence to support, is that these laboratories are a cover for biological and/or chemical weapons programs. There have been accompanying claims that official documentation regarding U.S.-Ukrainian cooperation at these facilities was mysteriously deleted, which has also turned out to be false.

The Kremlin's core claim, which again it has provided no evidence to support, is that these laboratories are a cover for biological and/or chemical weapons programs. There have been accompanying claims that official documentation regarding U.S.-Ukrainian cooperation at these facilities was mysteriously deleted, which has also turned out to be false.

Officials from across the U.S. government have also vociferously denied these claims, pointing out that these laboratories do work with infectious diseases, but in order to protect against them. They have also continued to deny separate Russian allegations that U.S. and Ukrainian authorities are working together to develop nuclear weapons, which are also entirely unsupported by any evidence.

Russia, as a permanent member of the United Nations Security Council, has now called a meeting of that body to discuss these allegations. It is important to note that this is hardly the first time Russia has made these types of claims about U.S.-funded research laboratories in various countries, including in Ukraine.

In addition, at a hearing today before the Senate Intelligence Committee, William Burns, director of the Central Intelligence Agency (CIA), warned that Russian disinformation about chemical attacks, specifically, could be a prelude to an attempt false flag operation. Ukrainian President Volodymyr Zelensky separately pointed out that the Kremlin has a history of accusing others of doing or planning to do what it is doing or planning to do.

At the Senate Intelligence Committee hearing today, Lt. Gen. Scott Berrier, the head of the Defense Intelligence Agency, admitted that he had underestimated the willingness of Ukrainians to fight against invading Russian forces.

Commercial satellite imagery provider Maxar has released new shots of various locations in Ukraine showing the extent of the devastation that has already been wrought in just over two weeks of fighting.

Ukraine says that Russian forces have struck the Kharkiv Institute of Physics and Technology, home to a nuclear research reactor, causing some amount of damage.

Other satellite imagery from Sentinel Hub appears to show Russian warships continuing to hold in place off Ukraine's Black Sea coastline, where they have been fears an amphibious operation could be imminent for days now. A senior U.S. defense official said that Russian forces have launched just six cruise missiles from the Black Sea since the invasion of Ukraine began.

A picture has emerged showing a member of Ukraine's volunteer Territorial Defense Forces standing guard at a checkpoint armed with a DP-27 light machine gun. The design of this weapon predates World War II and there were indications before the Kremlin launched its invasion that they could be issued for lack of other options, as you can read more about here.

Ukraine's military and defense enterprises are working to put some captured Russian equipment back into service, including small arms. A video appeared online today showing a captured 4x4 Tigr-M SpN light tactical vehicle with a remote weapon station that is now reportedly being used by Ukrainian forces.

CNN was able to recently accompany the crew of a NATO E-3 Sentry Airborne Warning and Control System (AWACS) aircraft on a mission near Poland's eastern borders. The crew of that aircraft was able to track Russian aircraft operating in neighboring Belarus and disclosed that they have been subjected to hostile jamming, which they described as "mostly just annoying," according to the report. They could not provide any information on what kind of data they might be passing to the Ukrainian government.

At a hearing before the Senate Intelligence Committee today, U.S. Army Gen. Paul Nakasone, the Director of the National Security Agency (NSA) head of U.S. Cyber Command (CYBERCOM), disclosed that the Russian government has launched three or four major cyberattacks since the start of its invasion of Ukraine, but did not provide more details specifics about those incidents.

Republican Party lawmakers in the United States are trying to pressure U.S. President Joe Biden into finding some way to finally transfer Polish MiG-29 Fulcrum fighter jets to Ukraine. At a hearing earlier today, Senator Tom Cotton, an Arkansas Republican, had questioned the U.S. Intelligence Community's assessment that delivering these aircraft would run a "high risk" of provoking some type of retaliation from Russia. The Pentagon has also said that it does not believe that fixed-wing tactical aircraft are what the Ukrainian military needs right now to help keep contesting the skies over the country. A senior U.S. defense official said earlier today that the Ukrainian Air Force is not flying its existing fighters heavily on a day-to-day basis now.

China has refused to provide Russian airlines with spare parts for their foreign-made aircraft, underscoring the increasing isolation of the country's commercial aviation industry.

Top Ukrainian and Russian diplomats met for the first time today over the conflict, which is now in its third week with no signs of abatement.