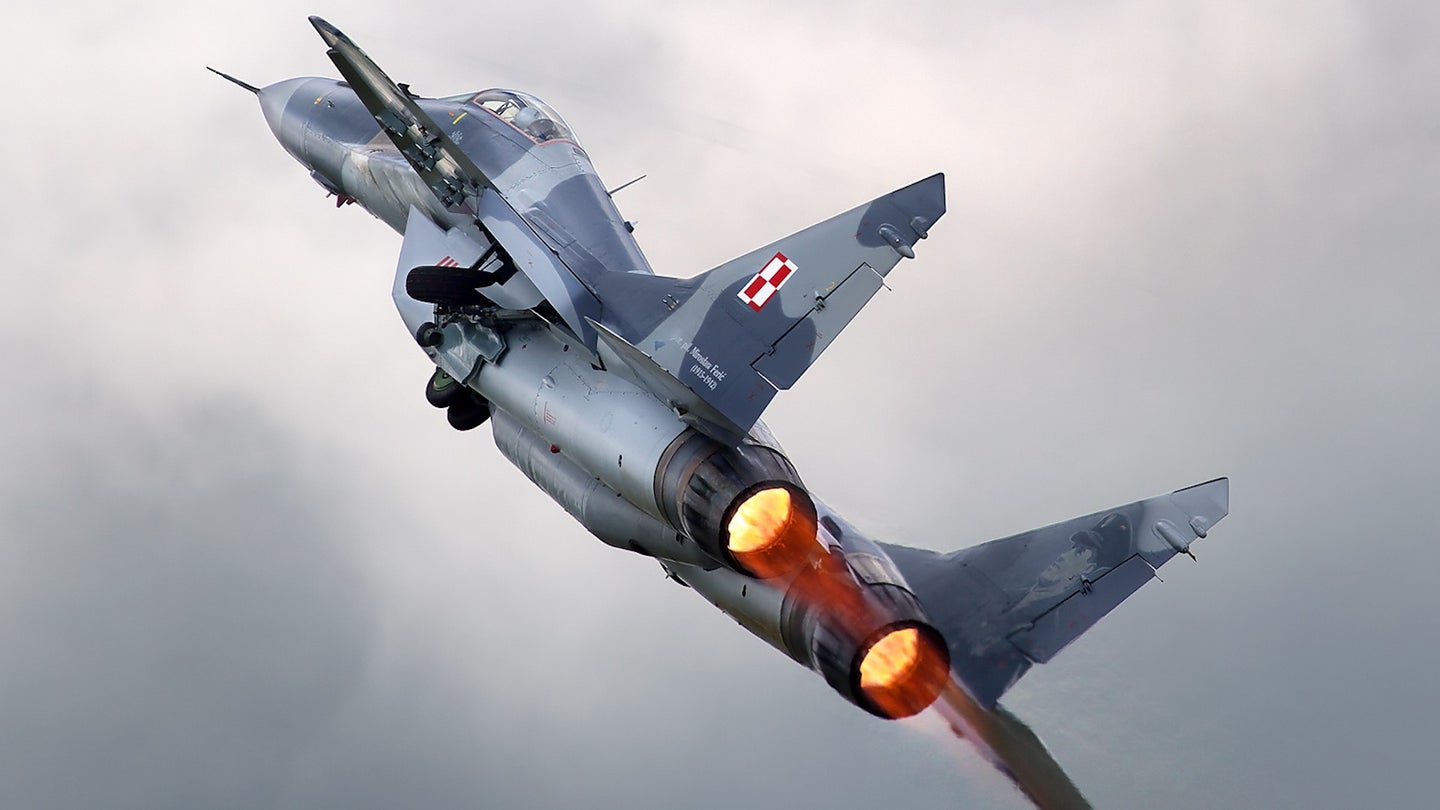 The Pentagon has now publicly said it will not serve as an intermediary in a three-way deal that would see Polish Air Force MiG-29 Fulcrum fighter jets transferred first to the U.S. government and then onto the Ukrainian Air Force. John Kirby, the U.S. military's top spokesperson, said that American authorities had determined that any such transfer would run a high risk of provoking serious Russian retaliation of some kind and that Ukrainian forces would benefit more from additional deliveries of ground-based air defense systems. You can read more about the Polish government's proposed plan, and the potential hurdles that it would have faced, here.

Kirby made his remarks about the U.S. government's response to the Polish government's proposal for how to get its 28 remaining MiG-29s to Ukraine via the United States at a press conference today. By every, indication this proposal, which emerged publicly yesterday, had caught American officials off guard. The plan, as stated by the Polish Ministry of Foreign Affairs, involved sending the Fulcrums to the U.S. Air Force's Ramstein Air Base in Germany and called on American authorities to help the Polish Air Force acquire an equivalent number of "used" fighter jets to make up for this loss of aerial combat capacity. This is the latest development in what has become something of a saga regarding possible deliveries of combat aircraft to Ukraine that began with a remark from a European Union official nearly two weeks ago.

"We do not support the transfer of additional fighter aircraft to the Ukrainian Air Force at this time and therefore have no desire to see them in our custody, either," Kirby said bluntly, after lauding the Polish government for its contributions to NATO and the military and other assistance it has already rendered to Ukraine.

"We believe the best way to support Ukrainian defense is by providing them the weapons and the systems that they need most to defeat Russian aggression," Kirby continued. "In particular, anti-armor and air defense [systems]. We, along with other nations, continue to send them these weapons and we know they are being used with great effect."

Beyond that, "the Ukrainian air force currently has several squadrons of fully mission-capable aircraft," Kirby said. "We assess that adding aircraft to the Ukrainian inventory is not likely to significantly change the effectiveness of the Ukrainian Air Force relative to Russian capabilities. Therefore, we believe the gain from transferring those MiG-29s is low."

These arguments mirror comments that a senior U.S. defense official made earlier today while providing a routine update on American assessments regarding the conflict in Ukraine.

This latter point is particularly notable since it is in direct conflict with statements that U.S. Secretary of State Antony Blinken made this past weekend regarding a potential transfer of the Polish MiG-29s to Ukraine. "No, that gets a green light," Blinken said in an interview with CBS News' "Face The Nation" in response to a specific question about whether the U.S. government would oppose such a plan for fears that the Kremlin might see it as an escalation in NATO's involvement in the conflict. It's not clear when this assessment of the risks may have changed.

A number of members of Congress in the United States have publicly come out in support of transferring fighter jets and other combat aircraft to Ukraine in recent days and have been urging President Joe Biden's administration to act on these proposals.

Pentagon Press Secretary Kirby did decline to close the door on the idea of Poland, or any other country, providing MiG-29s or other combat aircraft to the Ukrainian Air Force without U.S. government involvement. He said that sovereign nations had every right to make such decisions on their own.

However, Polish officials themselves said earlier today that they felt a unilateral deal to send these jets to Ukraine was very risky and that this was why they wanted the transfers to be done through the U.S. government under the auspices of NATO. In addition, the Polish Ministry of Foreign Affairs had called on other NATO members to make similar arrangements to transfer aircraft to Ukraine yesterday. This was seen as a reference to past discussions about the potential transfer of Slovakian MiG-29s and Bulgarian Fulcrums and Su-25 Frogfoot ground attack aircraft to Ukraine.

It is worth remembering that, before yesterday, the government of Poland had repeatedly and publicly denied that it was in any way planning to send its MiG-29s to Ukraine. Slovakia and Bulgarian have said they have no intention of selling or donating their jets, either.

Though it seems like an ever more remote possibility, it remains to be seen whether or not Poland, Slovakia, Bulgaria, or any other countries do ultimately pursue plans to transfer additional combat aircraft to Ukraine. Any such plan would face some degree of geopolitical, logistical, and training hurdles, as The War Zone

has explored in detail in the past. As Pentagon Press Secretary Kirby noted at the press conference today, there are also real questions about whether fighter jets of any kind are really the kinds of things that the Ukrainian military really needs now.

No matter what, at least for now, the U.S. government appears to have decide that it will not support the transfer of any combat aircraft to Ukraine.

U.S. Has Issues With Poland’s Plan To Turn Over Its MiG-29s For Eventual Use By Ukraine (Updated)

Over two dozen MiG-29s could help Ukraine keep challenging the Russian Air Force, but it won’t be simple getting them there.