Horrific scenes of massive devastation in urban areas are now becoming the norm in Ukraine. 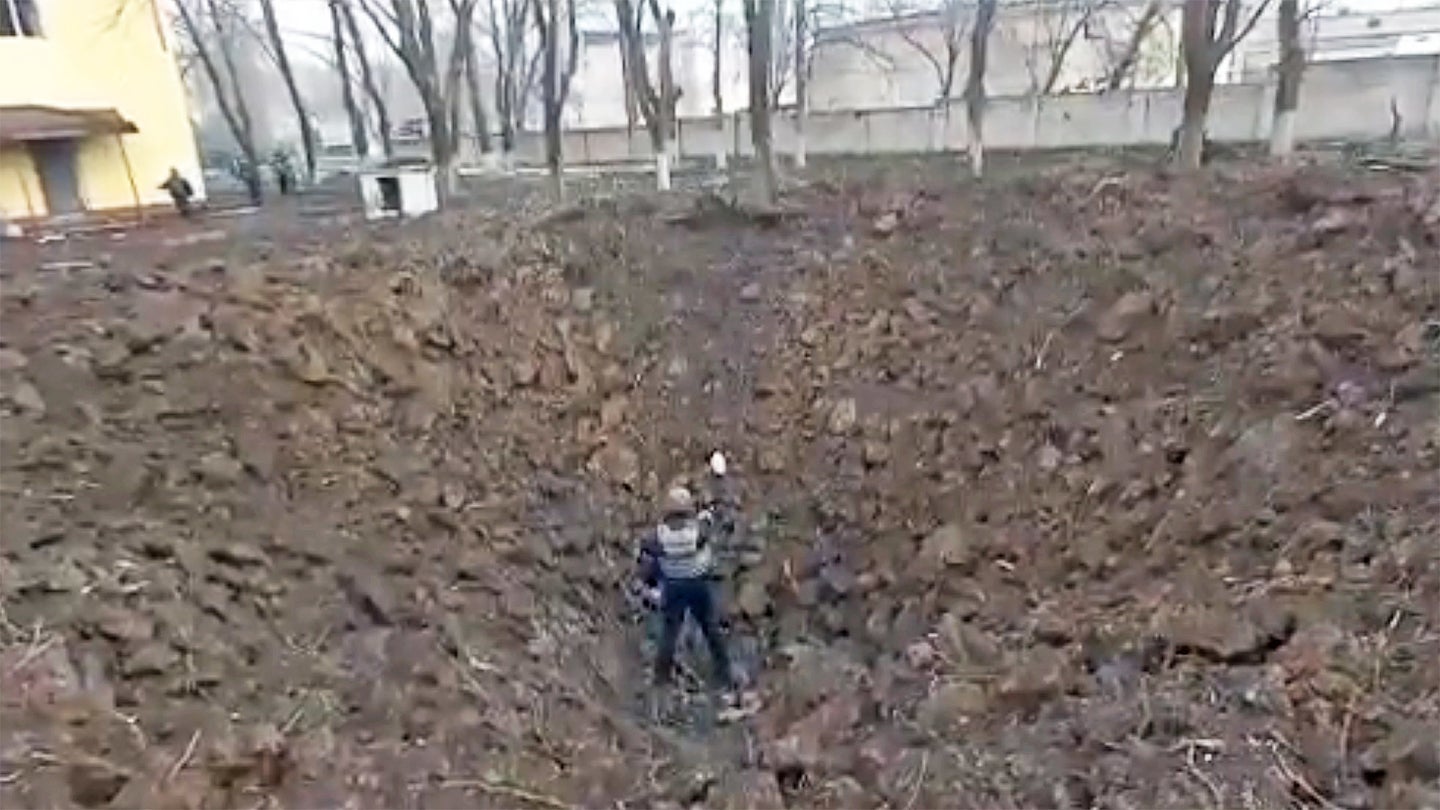 Russia's war in Ukraine is now in its third week. The Kremlin's advances have largely stalled on account of stronger-than-expected resistance from Ukrainian units, which have inflicted significant losses in armor, personnel, aircraft, and logistical vehicles, as well as supply chain issues. Still, the brute and often indiscriminate force of Russia's war machine is increasingly on display, leading to big concerns that a new phase of the war could see the war become an even worse humanitarian catastrophe than it already is. Case in point, the Russian media claim that the country's military has now employed its TOS-1A Thermobaric rocket artillery system in Ukraine. You can read all about this horrifying weapon in this recent feature of ours, but suffice it to say, that it can do horrible things, especially to those remaining in urban environments. Today we also saw the terrible destruction caused by a strike on a children's hospital in embattled Mariupol. The heinous act is being declared a war crime by many and sadly, it could be a preview of what is to come.

Readers can get fully up to speed on the current state of the conflict in Ukraine before getting into the latest news below by checking out our preceding rolling coverage here. Now let's get to the newest developments.

You can continue to follow our rolling coverage of this conflict here.

UK MoD claims that Russia has employed the TOS-1A:

New video of the aftermath from the strike on the children's hospital in the southeastern port city of Mariupol:

A massive crate from a bombing raid in Mariupol:

There are also fears that some sort of chemical weapons attack could be executed by Russian forces. This fear is not really new, but as the indiscriminate destruction is dialed up, it seems to be more plausible. This is especially the case if Russia's ground forces remain stalled in key areas or even end up being routed during retreat:

There is some glimmer of hope, Russia's Lavrov will meet with his Ukrainian counterpart for the first time. This is the highest-level diplomatic engagement yet between the two foes:

Ukrainian EOD is something else to behold:

Another sign that the destruction of enemy air defenses campaign is still underway or being accelerated by Russian forces:

If these estimates are even remotely close to reality, the losses on Russia's side are astonishing. They would have lost well over the total number of U.S. troops killed in Afghanistan in less than three weeks:

The Ukrainian government said earlier today that the destruction of high-voltage power lines by Russian forces had left the Chernobyl (Chornobyl) site, as well as other facilities inside the exclusion zone, without a link to the national power grid. Without outside power, continued operations at Chernobyl, including at a storage building there containing spent fuel rods, relies on backup diesel generators that can run for 48 hours before needing to be refueled.

Ukrainian authorities said this presents an immediate concern because of the possibility of a total loss of power to the cooling system in the fuel storage building. If the water that those rods are currently sitting is heated off or otherwise evaporates to the point where they are exposed, it could lead to a dangerous release of radiation.

The International Atomic Energy Agency (IAEA) said that Ukrainian officials had informed them of these details, but that it did not assess the situation to present a "critical impact on safety" at the site. The fuel rods at Chernobyl are more than two decades old and the IAEA says that their heat output is low enough now that the cooling pool can keep things stable without any power at all.

That's not to say there are no concerns about potential safety and environmental from this loss of power. The fuel rod storage building could still end up contaminated with radiation, at least to some degree, even if it is not expected to spread beyond that structure.

A loss of power would prevent regular monitoring of the entire Chernobyl facility and the Exclusion Zone. It would shut off climate control systems that are essential for helping to maintain the integrity of the confinement structure that encases the site's Reactor 4, which melted down and then exploded in 1986, an incident that remains widely considered to be the worst nuclear accident in history. Ukrainian authorities noted that automatic fire suppression systems across Chernobyl would also end up switched off, presenting additional safety concerns.

The 14th day of Russia's invasion of Ukraine has otherwise seen steady fighting in key areas in the northern, eastern, and southern portions of the country. Russian forces have fired more than 710 cruise and ballistic missiles at targets in Ukraine now, a significant uptick in such strikes, according to a senior U.S. defense official.

The airspace over Ukraine remains contested, despite Russia now having put significant air defense capabilities into place in and around Ukraine, according to a senior U.S. defense official. The U.S. government sees Ukraine's air defenses as still very viable. There was a new report just today claiming that Ukrainian air defenders have been able to shoot down an incoming X-31P (Kh-31P) anti-radiation missile.

Russian losses continue to mount, with the Pentagon saying that it believes the Kremlin's forces have lost hundreds of vehicles since the invasion began and at a rate of approximately 50 per day, on average. Still, a senior U.S. defense official said that Russian military units in Ukraine retain around 90 percent of their combat strength.

The U.S. military has assessed that Russian forces have made an advance of around 10 miles toward the eastern city of Kharkiv in the past 24 hours.

The Pentagon continues to see no evidence that amphibious landings at or near Ukraine's Black Sea port city of Odesa are imminent. This is despite reports that Russian maritime forces are massing in that general area. The Ukrainian military recently claimed to have destroyed a Russian ship in the western end of the Black Sea using shore-based artillery, though this remains largely unconfirmed.

The video below reportedly shows street fighting in the southern Ukrainian city of Voznesensk. Ukrainian forces are seen armed with M72 Light Anti-Armor Weapons (LAW), among other weapons, which have been included in the military aid shipment from a number of countries, as you can read more about here.

The video below reportedly shows a Russian tank being destroyed by a Javelin guided anti-tank missile, which has been an extremely important weapon for slowing the Kremlin's advances.

Ukrainian President says that the country's military has been replenishing its stocks of weapons and other equipment thanks to captured Russian materiel. It's unclear the degree to which Ukrainian forces are actually using captured Russian gear, but there is clear evidence that it has been happening to some degree since very early on in the conflict.

At the same time, military aid continues to flow to Ukraine and the country is seeking more amid reports of shortages, even in basic weapon systems like guns. The U.S. government said today that it is currently looking at new ways to bolster Ukraine's air defense capacity.

Russian authorities have also been forced to admit that conscripts have indeed been fighting in Ukraine, despite Russian President Vladimir Putin's recent pledge that they would not be sent to the front. The Kremlin has claimed that this was not supposed to be the case, that most conscripts have now been recalled, and has promised to punish unit leaders that allowed this to happen. This all, of course, follows reports that conscripts were among the forces arrayed around Ukraine in the lead up to the invasion and were compelled to sign contracts to formally change their status before being sent to fight.

Here’s our latest update on what is happening in the conflict in Ukraine, which has now entered its 14th day.

U.S. Has Issues With Poland’s Plan To Turn Over Its MiG-29s For Eventual Use By Ukraine (Updated)

Over two dozen MiG-29s could help Ukraine keep challenging the Russian Air Force, but it won’t be simple getting them there.