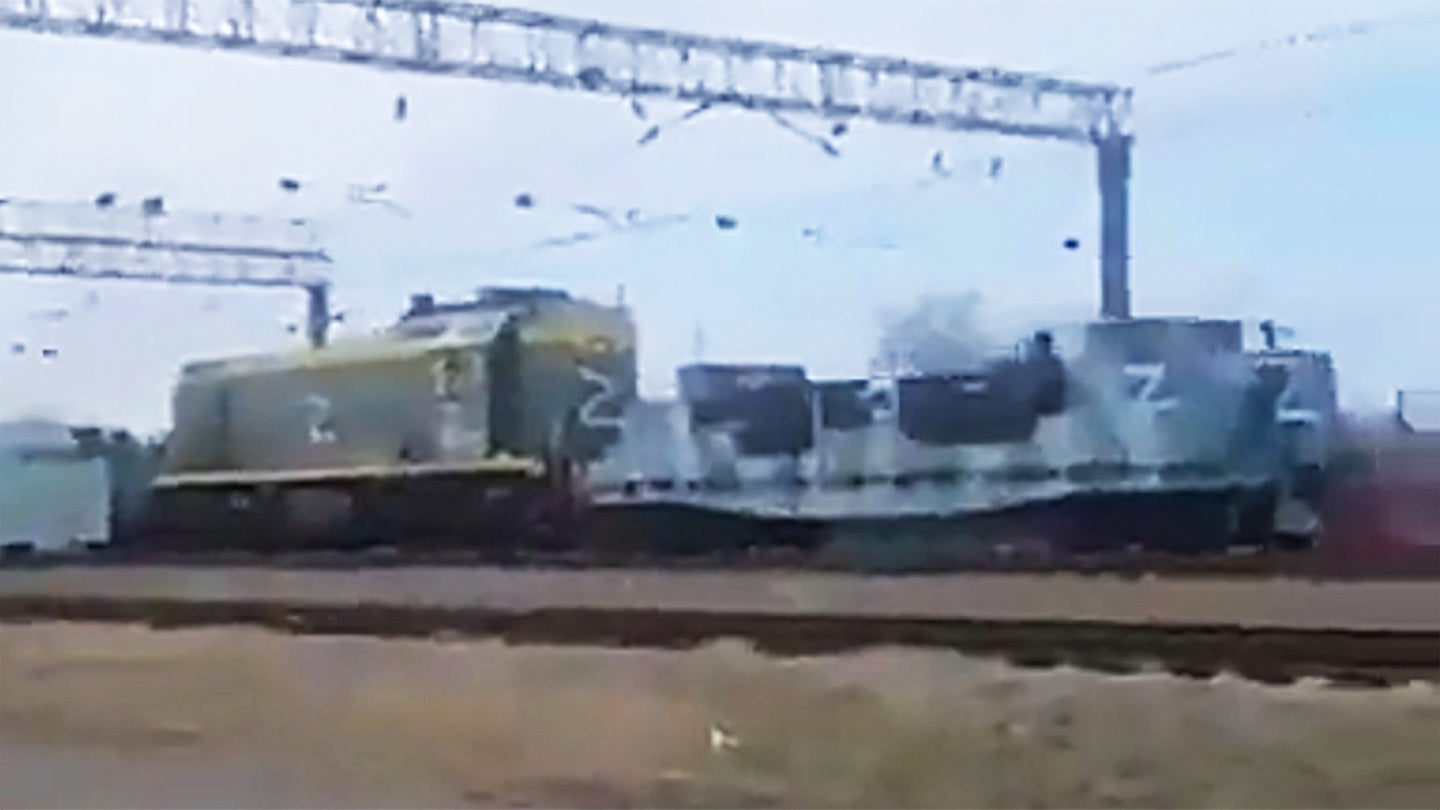 A Russian military armored train now appears to be taking an active part in the fighting in Ukraine. Video emerged on social media today reportedly showing the train arriving in the southern Ukrainian city of Melitopol after having departed from a yard on the Crimean Peninsula.

It's unclear exactly where or when this video was shot. However, the train is adorned with "Z" markings that some Russian forces have been using for identification purposes during operations in Ukraine. Zs and other symbols had started appearing on Russian military vehicles staged around the country's borders with Ukraine in the leadup to the invasion, as you can read more about here.

From what we can see in the video, the train has two diesel locomotives and eight railcars of various types. The lead locomotive is sandwiched between two specialized armored rail cars, with the one behind being armed with a pair of ZU-23 twin-barrel 23mm automatic cannons, which can be used against low-flying aircraft and targets on the ground. The resolution of the video makes it hard to tell what kind of payload the lead car is carrying, but it may be vehicles of some kind, which could provide firepower of different types.

Behind this trio in front is a boxcar, a passenger car, a flatbed car, two more armored railcars, the second locomotive, and another flatbed trailing at the end. The flatbed in the middle appears to be carrying a large cargo of some kind under wraps, while the one at the end looks to be empty.

It's not clear how many of these trains, which were originally put into service during the Soviet era, and that you can read more about here, the Russian military has in operation today. At least four have seen some degree of use in the post-Soviet period, including during previous conflicts in Chechyna and Georgia.

The video below shows a Russian armored train taking part in an exercise in 2016.

We don't know why the Russians may have deployed this one in this case, either. However, trains, in general, remain highly important to Russia's military for moving tanks and other vehicles, other equipment, personnel, and supplies. Beyond that, the Russian military is known to have conducted drills in the past that featured the use of these armored trains to support logistics activities in this exact region.

In 2016, two of them, named Baikal and Amur, took part in a logistics exercise that included operations in Crimea. That was reportedly the first time in 15 years that any of Russia's armored trains had taken part in drills anywhere in the country.

Two years later, the Russian government completed a bridge over the Kerch Strait, which links the Black Sea to the Sea of Azov, providing a route, initially for road traffic and then later for trains, between the peninsula and mainland Russia. Rail traffic across that bridge has been essential in the general buildup of Russian forces in Crimea in recent years, as well as the deployment of additional forces there ahead of the invasion. Trains were used to move forces into position elsewhere, including into neighboring Belarus, and are now an important part of the resupplying of Russian units throughout Ukraine.

At the same time, the country's logistics chains have been a major target for Ukrainian forces, and supply issues continue to be cited as a key factor for why the Kremlin's advances since the invasion started on February 24 have been much slower than expected. Pictures and video previously appeared on social media reportedly showing a Turkish-made TB2 armed drone carrying out a strike on a Russian train carrying fuel to the front, underscoring that Ukrainian forces appreciate the importance of these rail lines to the Russian military's war effort.

Russian forces that have entered Ukraine from Crimea have, by far, made the most significant gains, which the U.S. military has assessed to be in no small part because of the short length of the logistics chains emanating from the Peninsula. However, as those forces push outward, those supply lines only get longer, and protecting them from attack will only become more of a priority. In addition, many rail lines in southern Ukraine may pass through still-contested areas, including ones that Russian forces may have bypassed. For instance, Ukraine's Sea of Azov coastline, the complete capture of which will give the Kremlin an important landbridge to Crimea, has yet to be fully secured.

Though an armored train might seem like an archaic capability, one that feels like its time had passed by the end of World War II, it would still provide just that much more additional defensive capacity along critical rail lines. The use of this train could, in turn, help free up at least some other Russian forces who may be stuck protecting railroads now.

Whatever, the case, the Russian military clearly feels this armored train is provided useful additional capabilities as the conflict in Ukraine drags on.